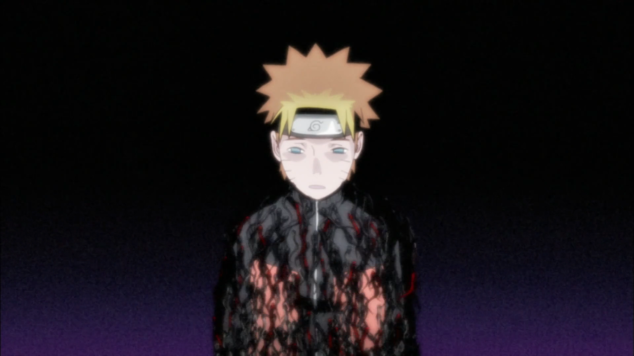 When it comes to why I dropped Fairy Tail, I lost interest a bit before the show seemingly changed. I fell out of the series when things were still somewhat “good”, but looking at where the anime is now, I find myself not even a little bit curious as to how it got to such a pathetically mediocre position. The difference between Fairy Tail and Naruto, to me, are simple: I loved Naruto, whereas I only kinda liked Fariy Tail. More importantly, I dropped Fairy Tail before I could see it fall apart, whereas with Naruto…well, I watched that ship sink as I was still jumping off it, then continued to view it become submerged from a seat on the shore and only got up to leave after a far longer time than needed to be sure there was no coming back.

Before I get into why Naruto became such an irredeemable shit-pile of a show however, I think it would be best to first look over what it is about the show that loved, and what I thought made it truly interesting and unique. Starting with what I probably admire most about the show, the lore and generational interconnectivity was something I found very impressive back in the day. Naruto takes place in a fantasy ninja world, the likes of which I have never seen, in a fictional period that I’d describe as both feudal and progressive. A world devoid of any relatively modern technology, and a world not disgustingly male dominated, unlike most of actual human history in the real world.

Initially, it seems to be a grounded world with many secrets, a world that’s bound by certain physical laws but also contains a well-thought-out system of magic, or in this case, “chakra”. Chakra is the key to everything, and through it you can begin to understand how jutsu, hand signs, walking on water, and etcetera work. It’s explained through the guise of ninja teachers teaching ninja students, and with diagrams it doesn’t come off as such an egregious exposition dump most of the time…well, some of the time. The point is, it all makes enough sense to get behind and doesn’t seem like writers are just pulling shit out of their ass early in the story.

In fact, most of the story early on seems to be very promising in that it appears to be very much thought through. Naruto (the anime, not the character) shows that it has an idea of where it’s going, giving plenty of hints that all tie into itself later on. One example would be Sasuke having a secret grudge, and also an ability called Sharingan that only his bloodline can possess, yet his sensei Kakashi appears to also have it, who is not part of his clan. It’s actually something quite worthy of marveling at when you think about just how interconnected these characters are. To prove my point, here’s a quick rant:

Naruto is originally a disciple of Kakashi, who was a disciple of the fourth Hokage, who was a disciple of Jiraiya of the legendary Sannin, who in turn was a disciple of the third Hokage. The third Hokage taught the legendary threesome: Jiraiya, Tsunade, and Orochimaru. These three eventually split up, with one of them (Orochimaru) becoming evil. Many years later they end up becoming the sort of mentors for Kakashi’s Team 7. Jiraiya trains Naruto, Tsunade takes on Sakura, and Orochimaru gets his hands on Sasuke. But before any of that happens, we must take a look at the other teams in Naruto’s generation. There’s Kakashi’s long-time rival, Might Guy, who goes on to train Neji, Lee, and Tenten. Neji is part of the Hyuga Clan, and he has a whole backstory of being born on the lesser, subjugated part of the clan. Meanwhile, his cousin Hinata becomes the princess despite having considerably less skills than him. She belongs to Team 8 with Kiba and his dog Akamaru, and Shino. She’s also secretly in love with Naruto. Their sensei is Kurenai, who happens to be in love (and eventually has a baby) with Asuma-sensei, leader of Team 8. He’s also the son of the third Hokage. His team consists of the Ino-Shika-Cho trio, a.k.a. Ino, Shikamaru, and Choji. Every character is from their own respective clans, and this team’s clan have a lineage of working together. Clans pass down their own unique types of jutsu and techniques, and a lot of them are given an incredibly detailed history. Not that that history necessarily gets in the way of the primary narrative, rather it usually becomes a much-welcomed tangent in this epic tale of how Naruto becomes Hokage. Oh! Oh! And then there’s Iruka-sensei, who was Naruto’s first teacher to care about him. Iruka’s parents were killed by the nine-tailed fox, and the fox was eventually sealed away in a child by the fourth hokage. That child was Naruto Uzumaki, and because the town knew about this terrible demon inside of him, Naruto was shunned his entire childhood. So Iruka also had a lot of resentment and…yada, yada, yada. 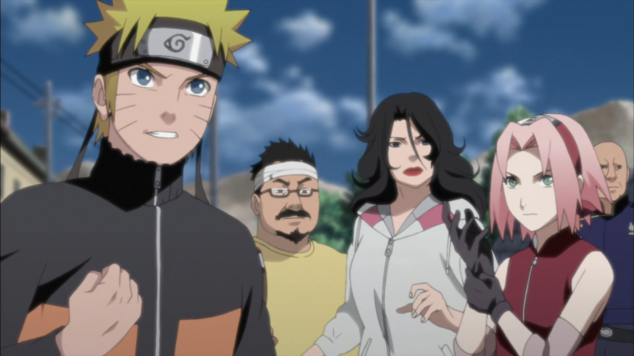 And that’s not even the tip of this admittedly obnoxious-long spear. The village hidden in the leaves, the town of which all these characters I just mentioned now or at one time resided, is just one ninja village of many. There’s still the villages hidden in the sand, mist, sound, stones, clouds, and more, but I think you already see my point in that there’s a lot of it. If I’m being honest though, I would’ve cut the lore off at the sound village. From there I’d say it starts to become completely out of control, but I’ll get to that later. At the point in the story of which I’m referencing (still young Naruto, not Shippuden), the lore was dense but contained, and didn’t feel excessive to the point where the author was just clearly felating themselves. If anything, it felt almost entirely integral to understanding this world, and took almost, if not as much, IF NOT MORE significance than the protagonist himself.

Anyway, the lore itself isn’t the only thing I loved about Naruto. Like many other angst-y, teenage boys back in the day, I was drawn in by the action. Naruto was actually the first anime I’ve seen to depict some gruesome violence. Looking back, it obviously wasn’t so dire, but at the time I was pretty surprised to see blood and stabbing and characters that were truly out to kill each other. These were kid ninjas using blades and shuriken and acupuncture needles to fight bloody battles. Their lives were always on the line, and in a more than a few moments you could see a fear of death. Now of course, the show hadn’t gone so far as to ever really kill major characters off, at least not to prove a point. I’ve seen plenty of shows that have used death to convey a sense of danger, and typically it comes off as a cop out. Naruto was able to build a sense of danger and dread without doing so, and in hindsight I find that quite impressive. Team 7 is first introduced with Kakahashi telling his students to come at him with intent to kill, and that’s all that was needed to establish a general feeling of life and death. There are stakes and Naruto didn’t have to kill anyone to prove that.

As for the action itself, the show pulled of some incredibly inspired, thoroughly thought out, and expertly choreographed fight scenes. A lot of the fights in Naruto, end in very clever, very practical ways. While the show obviously doesn’t hide the fact that it carries “the power of will” as one of its major themes, characters don’t win fights simply by trying harder (there are exceptions of course). Using Naruto vs Neji as an example, Naruto finds the way around Neji’s “all-seeing eyes” and comes out victorious. Part of this victory comes from Neji’s hubris and lack of metaphorical sight when it comes to destiny, but the other half comes from Naruto’s ability to physically (physical in the context of their world) find a work around to his Byakugan. Naruto slyly made his way underground and caught Neji with an uppercut from below his feet.

What’s even cooler is that later on, Shikamaru makes use of the hole Naruto left in the arena in his own very methodical battle plan.

Then of course, there’s the animation. When it wants to, Naruto can pull off some really awesome action sequences. But don’t just take my word for it.

Of course, the show wasn’t always that spectacular, nor would I say it was that great looking most of the time.

Somewhere during Shippuden though, Naruto stopped looking great even half of the time. Now, most of what I’ve said so far regarding what I loved about the show only really pertains to the first half of Naruto, the original series. After Sasuke leaves the village, the series becomes nothing but filler, in every sense of the word. Naruto Shippuden however, feels like we picked up where we should’ve left off and feels more like the Naruto I know and love. Then Pain comes in and ruins everything.

The fall of the leaf village is where everything goes to shit, both literally in the narrative and figuratively in the quality of the show overall. Now, I know some people who have problems with that arc from start to finish, but I find that the ending and what came next are what really got the show rolling down a hill and straight off a cliff. As a brief summary for those reading who haven’t seen this: Pain is a guy that strolls into town with a bunch of other guys he controls. They are also named Pain. They destroy the city and kill a handful of important main characters. Then Naruto shows up and saves the day, but not before Hinata, the girl who has had a crush on him since the original series, confesses to him and then gets murdered by Pain. Naruto goes ballistic, manages to control himself in the end when the nine-tails is almost completely loose, then goes off to have a private chat with Pain and gets him to return the souls of all the people that he just killed.

And as if pulling off the cheap “you thought they were dead but now they’re back” trick with a handful of beloved characters all at once wasn’t enough, the season to follow this mess is nothing but fruitless flashbacks to the original series. Never-before-seen stories that don’t impact the current narrative arc whatsoever are all you get for like 10 weeks, when one would be dying to know just what happened after such a fatal, traumatic experience. Plus, there was a confession! What the fuck happens to that? They don’t fucking talk about it at all, I dropped out at 288 and still don’t know.

And to be honest, I don’t care anymore. They stopped trying with this series, and clearly milked it for all its worth. The animation quality went down the shitter too, as plenty of episodes became crammed with CG. I said they had a season of nothing but flashbacks, but it doesn’t end there either. Sometimes they would make flashback episodes to key moments in the original series that any self-respecting fan would remember, but then they would make it shittier by adding CG to it, and lines that were never spoken before? I can’t continue to watch this show, because it’s clearly become something I hate, and it honestly disgusts me that there’s still no end in sight. And that’s why I dropped it.

4 thoughts on “Why I Dropped Naruto (Shippuden)”