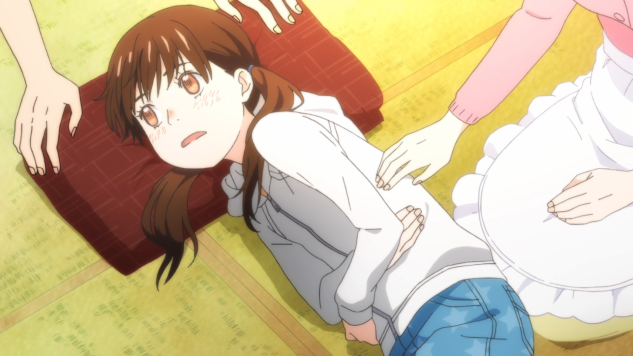 I’m very much enjoying how connected this entire cast continues to become. Nikkaidou’s already met Rei’s “family”. So has Kyouko. And now Rei’s teacher is being thrown into the mix as he reacts furiously to news of Hinata’s predicament. His rage is offset by the show’s usual brand of comedic relief—whenever things get serious, the show becomes quite cartoony and overdone. And whenever things get REALLY serious, the show stops underplaying itself to ensure the deeper, somber moments REALLY strike chords in the audience.

Nikkaidou’s hospitalization, for example: the scene where Rei calls upon Nikkaidou’s brother for answers. The way the moment is executed, there are no lighthearted background changes, people inconspicuously growing horns to emphasize their rage, or any other kind of non-diegetic insert that could be considered remotely funny or cheerful. Instead, we’re met with the tonally dark setting of the near empty shogi hall about to close for the night, moving out to the dimly lit streets as Shimada and the director (I think he’s the director of the shogi hall?) try to walk away.

There’s a lot of detail put into the lighting of this scene, shot in low-key (or high-contrast) for dramatic effect, with extra attention given to the directional manipulation of light sources onto the subjects. There’s a lot of close-up inserts on their faces, particularly on their eyes and mouths. Shimada defensibly grins as he speaks to Rei of the tragic development. In these close-ups, we notice the lighting upon their heads changed in relation to the diegetic fixtures of light within the scene. Their faces move in and out of the shadows as the characters turn toward and away from the light—the light being positioned in relation to where Rei stands, so as to imply that facing the light, facing the truth, and facing Rei are all one in the same.

Finally, we’re regaled with the valiant, heartbreaking tale of Nikkaidou: A child with a desire for greatness, hacked off at the knees by a debilitating illness. His unchangeable physical weakness led him on a journey for intellectual strength in its place. Climbing the shogi ladder has been his goal ever since youth, but even a board game can sometimes require a level of stamina that Nikaidou just can’t reach. Worse part is, he’s filthy rich! That might sound like a plus, though the truth is that his affluent upbringing only causes him to be more of an outcast, unable to garner sympathy or respect from commoners. 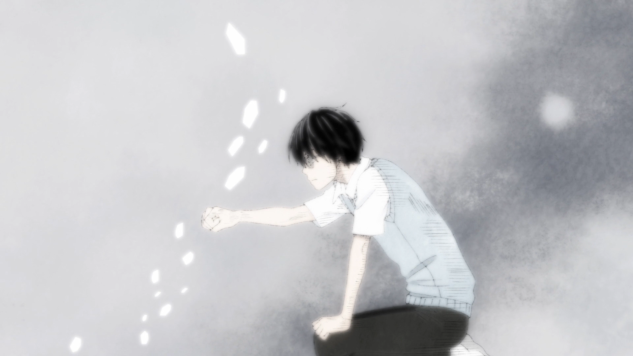 It’s a sad, sad tale, and once Rei hears of it, he can’t help but feel enraged by the person who defeated Nikkaidou simply by outlasting him to the point of fainting. They promised to meet each other in the championship match, but now it’s up to Rei to rise up and avenge (but not really) his dear friend. During the final battle, Rei begs a question of war: Must one fight nobly? Or should one do whatever it takes to win?

Swept up in fury, Rei comes to the conclusion that it is pathetic to win not by overcoming one’s own weakness, but by exploiting the weakness in others. Still enraged, Rei nearly throws the game by recklessly going on the offensive until a voice chimes in and stops Rei from making a terrible mistake. The voice of Nikkaidou, reminding Rei what shogi is truly about, and returning him to the calm state of mind necessary for succeeding in a game of wits.

And then Rei wins! But what happens next? Surely everyone but I already knows, because I am soooooo far behind. Sorry for the break in posting again, I know it’s been a bit of a reoccurring thing with me lately. I’m actually vacationing in another state right now, and I snuck away from my friends just to write this because it’s been too long, and I really just want to start writing on a regular basis again! Hopefully that can start soon, but until then, thanks for reading.