Fireworks is…a bit of a mess, and most people are probably going to rightfully point that out. Taken at a basic level—the level of which general audiences will most likely perceive—the plot, dialogue, and acting are at least weird, if not completely stupid, nonsensical, and hopelessly romantic. The way characters act and engage with each other doesn’t entirely make sense. It’s like watching an alternative world that looks almost exactly like our own, with the only differences being the way fireworks look, and the way human nature is portrayed. Sometimes it’s as simple as the feeling of wanting something only when you can no longer have it—which is completely relatable. At other times, it’s as if characters act without any conscious whatsoever, saying idiotic things and committing obscenely asshole-ish acts.

One thing about myself that you might like to know is that I instinctively tilt my head whenever I witness something that doesn’t really work but was attempted nonetheless. I noticed myself doing that a lot in the theater when I watched this film, because quite frankly, there was some absolutely silly shit going on there. The most ridiculous moment for me had to be when one of the characters comments on his teacher’s breast in the middle of class, and then stands on his desk and starts jumping around class like he’s playing the “the floor is lava”. He gets off completely un-reprimanded, which is just…unspeakable and ludicrous. It just doesn’t make any sense whatsoever, so much so that I find it difficult to even comprehend, and impossible to articulate how I feel about it. That last sentence really sums up most of what I felt for this movie. From a story perspective, I just don’t see the point, so I’m going to go ahead and ignore it going forward in this post.

SHAFT is well known for two things: head tilts and rapid sequences of cuts and jump cuts. I’m a fan of editing when done with precision or at least some semblance of purpose. Hell, I can enjoy this style of editing even if there’s no clear purpose. What SHAFT has done so well in their history, they didn’t seem to repeat however. The usual flashy, discontinuous editing style they implement functions to make what’s on the screen constantly feel fresh and lively, even when blowing through still frames. This was certainly in Fireworks, but it wasn’t as pronounced, and utilized in slower and seemingly amateurish fashion. It’s utterly mind-boggling that the film contains such heinously ugly CGI of characters riding bikes, and even more stupid was the fact that they couldn’t or wouldn’t even try to hide it at all. If the cut was fast enough, audiences probably have enough time to pick up on the N64-looking character models currently on screen. Instead, it’s as if the animation was created by a child and passed through by a blind editor, worthless producers, and a completely uninterested director. The fact that this movie was released in such a state is a travesty, and is basically throwing mud on the face of a studio that has, at least recently, had an absolutely pristine track record. 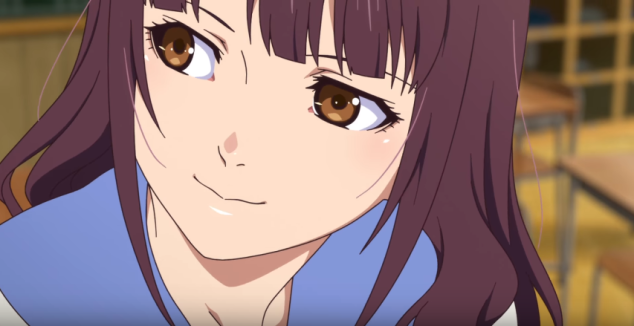 The movie contains some of the hallmarks of SHAFT that I love. I fell in love with their “Avant Garde for the sake of Avant Garde” quite a while ago, and at least managed to enjoy that out of Fireworks. Their environment CG and background art was also gorgeous and distinctively “SHAFT”—being noticeably 3D, but in a very smooth and un-intrusive way. Certain shots definitely reminded me of Kizumonogatari, and therefore worthy of praise. A lot of the animation was also impressive, and the character designs were godly—as to be expected from Akio Watanabe.

What it really comes down to when I think about Fireworks is one’s capacity to ignore story and just enjoy visual spectacle. I happen to really like just watching for animation, editing, framing, and so on. Honestly, this movie might’ve been better had I not listened to any of the dialogue at all. The sound design was also hit or miss, with random emotional swells in music playing when nothing of significance was on screen to correspond to. I even tried to look deeper into the imagery and find meaning through symbolism…but sadly, I just don’t know if there’s any meaning to be dissected from this film. I find myself hovering between fascination and stupidity when it comes to thinking about this movie, and weirdly enough, I kinda want to watch it again.

Perhaps this could be a good “From Bad Anime Comes Good Inspiration” post in the future. For now, I’m still a bit unsure…though if I had to praise Fireworks for one thing, I’d recognize it as the anime to leave me the most befuddled. Such a strange and seemingly mediocre film…thanks for reading?