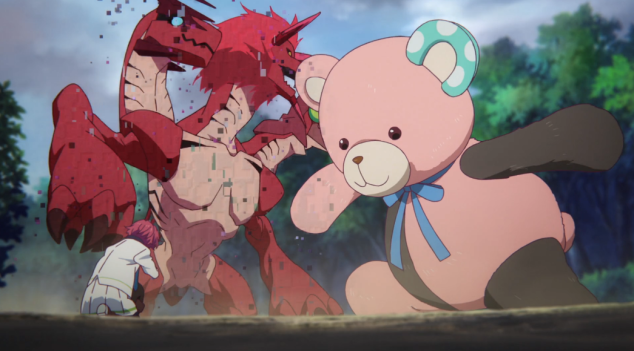 Alright, I’m going to stop complaining about the same minor things every week. I’ll just sum it up right here, and then if it doesn’t change I’ll refer you to this post, to tell you the bad part of Myriad Colors Phantom World. Or rather, just the things that I don’t like. I don’t like the intro sequences, not to be confused with the OP, I actually think that it’s pretty alright. I decided not to let Ruru get on my nerves anymore, it takes two for annoyance to exist: One to annoy and the other to be annoyed. She’s okay, and I’ll leave it at that. As for the whole chanting process, can we just stop? We get it, it’s magic. You don’t need to waste more time reciting the same boring chant over and over again.  Finally, and the biggest problem I have over all with this show is that there’s far too much exposition. It was really bad in the first few episodes and it’s gotten mildly better in the last couple.

Well, now that I got that out of the way, let’s talk about these new characters! Holy fucking shit, she has a giant fighting teddy bear! How fucking cool is that? I am referring to Kurumi, of course, the little admirer of Mai with lavender hair and an adorable voice. She’s very cute and seems to interact well with the others. Also, the show hints that there’s more to her than just being moe for moe’s sake, and I’m sure we’ll see more of her in the future.

Now on to the character of the week, um, what’s her name? Oh yeah, it’s Minase. Basically, she’s a loner and a phantom hunter. She has a little backstory that makes sense of her resentment toward phantoms. It works just fine, but I feel the added touch of the phantom that started it all being the one they faced in the episode was unneeded, like the show was just making a connection for the sake of making a connection. Of course in the end it turns out that it wasn’t the actual phantom from her childhood, so the real thing’s still out there, somewhere…whatever.

I am glad that we got to see a little emotion out of her at the end, because up until that point she only had one face, a blank stare. Now she has two! A blank stare and blank stare – blushing cheeks version.

Now we finally have an idea of who these characters are and what powers they have. Here’s my run down:

Haruhiko Ichijou (a.k.a. Human Encylopedia) – He’s a know-it-all that can summon a dog and seal things with his drawings.

Mai Kawakami (a.k.a. Mayonaise-sama) – I wish I could say I noticed the Mai onee-sama thing earlier, but it actually flew right above my head until recently. Anyway, she has considerable physical strength and combat experience, plus she can sensually rub herself up to control the elements.

Reina Izumi (a.k.a. Best Girl) – She’s very cute and has a wonderful voice. Also, she’s the real deal that seals and heals, ya feel?

Kurumi Kumamakura (a.k.a. That Girl) – She has a giant, ass-kicking teddy bear.

Koito Minase (a.k.a. Loner Chick) – She can sing and seal things. Why do they have so many sealers?

+ The band’s finally together?