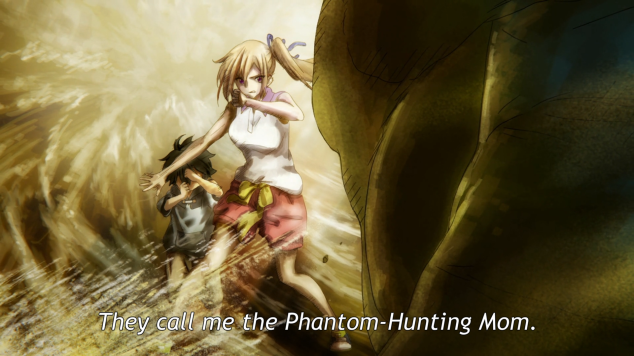 It happened. IT FINALLY HAPPENED! No more terrible intros where The Human Encyclopedia tries to teach us fairly commonly known concepts that loosely relate to the episode at hand while Ruru grasps for any joke she can because Haruhiko is just too boring without it. Instead, we get this ^ sick shot and awesome line that leaves me excited and wanting more. “Phantom-Hunting Mom”? What could be cooler? Nothing.

But before we get to the good stuff, let’s take a moment to highlight the bad. Koito Minase. I still feel like this character hasn’t been properly established, at least not well enough to be part of the gang. Like zoinks, did I miss something? Cause they’re all apparently good friends now, and I’m not entirely sure why. I know they had their run-ins and worked together multiple times to take down the Phantom of the Week, but what actually made her decide to stop being a loner? (Comment below if you know why)

So the whole story really begins when Haruhiko heads home and finds a little piece of his past: A letter that he wrote for his class as an elementary school student. This triggers a flashback of him reading it to the class with melancholy music to accompany. There is, however, no dialogue in this scene and so what really happens here is left ambiguous…for now.

Haruhiko then wakes up the next morning as a child. Young, confused, and running late, he gets dressed and heads for school. What’s interesting here is that he has the mindset of his young self and does not remember anything from his older years. Now here’s the clumsy part of the setup. Kurumi finds Haruhiko sitting outside, baffled by the fact that he didn’t recognize anyone in his class and that they didn’t seem to know him either. The worst part of this is that it takes way longer than it should have for Kurumi to put two and two together. This boy looks like Haruhiko. This boy talks like Haruhiko. This boy then introduces himself as “Ichijou, Haruhiko”. Come on, Kurumi! You’re not this dumb, and this shouldn’t be something so difficult to grasp considering the reality they live in. It would’ve been simpler to just notice what was up right off the bat and bring him to the clubroom. But I digress.

While the group considers how to approach this new development, The Little Human Encyclopedia shows just how annoying he can be. But this time it’s different, because he’s not being annoying to the audience like he usually is. Now he’s being annoying to the others, in the way that children often are. Then Ruru does the funniest thing I’ve ever seen throughout the entire series.

When you’re being a prude. pic.twitter.com/X8ldvaJOZk

After that, Mai is decided to be his caretaker, for some reason, and she has to suddenly learn how to be a single mother. And it’s adorable. She takes him shopping and he does the cliché child thing where he fills up the shopping cart with whatever he wants. Time passes and now Mai has a part-time job to support Haruhiko and is under an incredible amount of stress due to just making ends meet. They have their sweet bonding moments, like Mai comforting him during a thunderstorm, or playing at the park the next day.

Then a cat pisses on a Phantom sandbox and ruins everything. Mai is suddenly in trouble and Haruhiko conveniently reverts back because the situation calls for it. He saves the day and everything returns to normal. They go back to his place and Mai reads Haruhiko’s letter from the beginning of the episode, revealing what was actually written and bringing the whole episode full circle, wrapped up with a neat little bow.

I wish this whole show was just lighthearted drama about Mai trying to be a single mother. pic.twitter.com/tD8tecOO8O

A truly fantastic episode, arguably the best in the series so far, Myriad Colors Phantom Worlds delivered something I didn’t think it was capable of, and I loved it. I wish the whole series was just watching Mai stepping into the role of a single mother, as it’s been more compelling than anything else shown so far.

+ Hilarious, off the wall moments

+ Heartwarming, down to earth moments