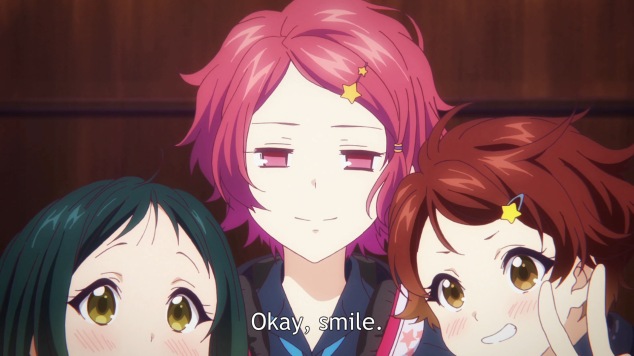 Well, the intro is back. *sigh*

But I kinda liked it this time. They started getting into Phantoms and aspects of our personalities and shadows (personas) and stuff and it was super enlightening and then they ended on a joke that seemed to foreshadow what was coming next. The last line of the intro: “Folktales aren’t copyrighted, so we’re in the clear!” A comedic nod at using folktales because they’re easy and free, only to be completely ignored. Well, I guess that lady was a vampire-thingy, so that’s kind of a folktale? Or perhaps there’s some sort of Japanese folktale that’s gone completely over my head, and if that’s the case please tell me in the comments below.

So we move on from the intro to find our spunky protagonists once again fighting some Phantoms on school property, just like the very first episode. Except now there are more members, and apparently they are on the top of the school hierarchy. Yes, they started from the bottom and now they are here, and everyone admires them and life is great and even Minase has a fan club, for some reason. Then there was a call back to the device thingy in episode two that was never explained, only to not be used in this episode either.

Now onto a tie in from a previous episode that actually means something: The Human Encyclopedia’s mother who abandoned him is suddenly back! That’s not suspicious at all! Haruhiko gets all emotional and they start to mend their relationship and Haruhiko doesn’t have to be alone anymore and they have a blast spending time together and going shopping together and doing mother and son things TOGETHER and it’s great. Then they have this moment where all the girls come to the table and it’s brilliant/awful/whatever you want to call it.

Now, I’m of the belief that just because there’s one male protagonist and a group of female protagonists, a harem isn’t a forgone conclusion. I’m not saying I don’t like harems or that this show would necessarily suffer just by having one…but *deep breathe* WHAT THE F@#$! I really don’t know how to feel about this. On one hand, there is a reason for each of these girls to like him, as realized by all of the characters in that awkward dinner conversation when Momma drops the “which one of you is going to f@#$ my son?” bomb. Okay, I may be paraphrasing. But on the other hand, Haruhiko sucks! He plain sucks, specifically, the life out of the room whenever he goes full encyclopedia and explains something everyone already knows. And by everyone, I mean the characters. Obviously he is an exposition device and exists to inform less educated viewers, which in it’s own right is perfectly fine. But damn does it feel patronizing to more informed viewers, as well as the other characters. And this, plus his almost complete lack of any other defining characteristics beside “kind of nice” and “good at drawing” makes him not a suitable partner for my Izumi. Back off my waifu, Haruhiko! You don’t deserve her! You don’t even deserve Minase.

Erhm, also there’s this convenient phone call that pops up and provides the shocking revelation as to what’s really going on. Then the villain reveals herself and her plan doesn’t really make sense at all considering her end goal but whatever just go with it and Haruhiko kisses his mom in the moonlight and Ruru steals the attention even though there are currently three people unconscious right now. And then the predictable cliffhanger to lead into the final episode.

So come back next week to find out what I think about that.

I really should tweet my predictions or something, because I totally knew the last two episodes would be connected through a conflict that just appears to serve what will probably be a big, action-y and emotional climax. Or something.