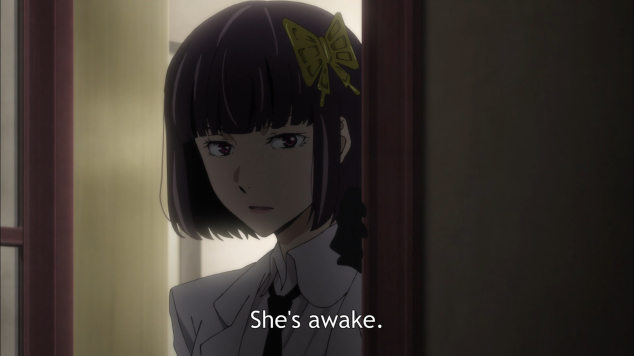 This week’s episode, in a word, was…unpleasant. To be honest, I’m just sitting here trying to come up with something good to say about it, and I…I just can’t. It seems like Bungo Stray Dogs has just been getting worse and worse now, and to me it has been such a disappointment, considering I actually thought this show had promise. The show is terrible when it comes to setup, its tone is completely off balance and every once in a while it’s just completely voids itself of logic and reasoning. But my hang-ups aside, let’s get into what made this episode in particular such a miserable waste of time.

There are two major wastes of time in this episode aside from the cool, mysterious things happening to Dazai. Waste of time #1 was the date. Atsushi takes Kyouka on a date and nothing happens. It’s just a cute, fun, montage-worthy time, lacking in any substance or reasons for me to give a care. This might’ve at least been a good time for Kyouka and Atsushi to bond in some way. Instead they play a crane game and ride ferris wheel. Because that’s never been done before (sarcasm, because I actually have seen it been done before, so much so that it’s kinda cliché). Oh, and I forgot to mention that this all started with Atsushi taking her to the police station. He decides not to though, but they end up there anyway. And then the mafia shows up in broad daylight to capture Atsushi. In front of a police station.

Okay. I’m not even going to question it anymore. The mafia is the most one-dimensional, blunt opposing force ever, and I guess I just have to accept that. Mafia equals bad. Not clever or interesting. Just bad.

Onto waste of time #2: That part where the agency squabbles over whether or not they should’ve even bother to save their comrade, Atsushi. If this was a video review, this would be where I pause to express my skepticism and discontent. Although, I probably would’ve paused for that broad daylight thing too, and maybe two skeptic pauses is too much for one video, especially back to back-okay look, this is stupid. It’s episode 9, and now’s the time you decide to think over the value of a teammates life? Just shut up and go get him. But no, instead it takes them much longer to even leave their office space. Some sort of convoluted process goes down in efforts to locate Atsushi, there’s an office full of dead people (for some reason), and then finally the one-shot, ass-wipe detective Ranpo solves the mystery in a matter of seconds (like, he wasn’t even doing anything and yet they used him as a last resort).

Why even waste our time with all of that if you’re just going to use a simple solution in the end to move the plot forward? Can’t you find a better use with your screen time than this bullshit? I want to learn about Akiko and Kyouka and Dazai and maybe even Atsushi, so long as it stays away from the same recurring orphan flashbacks. If this show isn’t going for the intellectual, well thought out route, why not at least give us more action? Or sex? Or comedy? Or something even remotely entertaining?

But instead we get this. Here are the three major points to take away from this episode: Atsushi is captured, the Agency is coming after him, and Dazai is doing something on the side. Here are some minor points: Kyouka probably feels bad about it and Ranpo’s a dick. Outside of these things, I can’t really find anything worthwhile about this episode. Almost no entertainment value whatsoever.

Well, that’s just my opinion. I just couldn’t enjoy myself with this week’s episode. But props to you if you could, and feel free to tell me why in the comments below. Or just tell me I’m right and this episode was a total shit-show. Or maybe something in-between. Maybe I’m just in a sour mood.

Thanks for reading, I hope next week is one thousand times better.