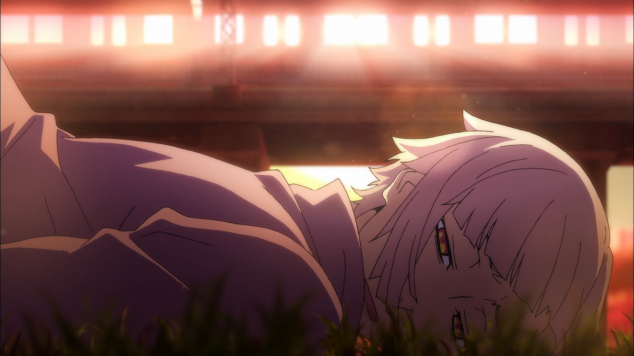 Bungo Stray Dogs is about a detective agency made up of “gifted” and eccentric individuals. Most members of the Agency wield their own unique, supernatural ability, and together they make a mighty force to combat the mafia. Also, only one of them is an actual detective.

Now that I’ve filled you in on the basic plot of the show, let’s get right to the heart of the matter. Bungo Stray Dogs is, at times, a mess. Through a series of awful setups that only lead to decent and sometimes good payoffs, Bungo Stray Dogs shows its inability to make a plausible plot with understandable or compelling villains. Its tone is completely unbalanced, the motivations of its protagonists are often over-explained while still remaining nonsensical, and to top it off, its main character is a total Mary Sue. Whatever there is to like about this show melts away by the time the season reaches its halfway point, and only somewhat returns to form for its finale.

The plotting of individual arcs in this show have been utterly atrocious. While the payoffs are enjoyable, consisting of clever twists and decent one-liners, the setups for these aforementioned payoffs range from pathetic to completely ludicrous. A fine example would be from an early episode, when a client leads some of the Agency into an alleyway. That’s it. They followed a woman into an alleyway and it turned out to be a trap. Not even like a pitfall trap or something. She just pulls out a submachine gun and starts blasting away. And it doesn’t really get better than that. 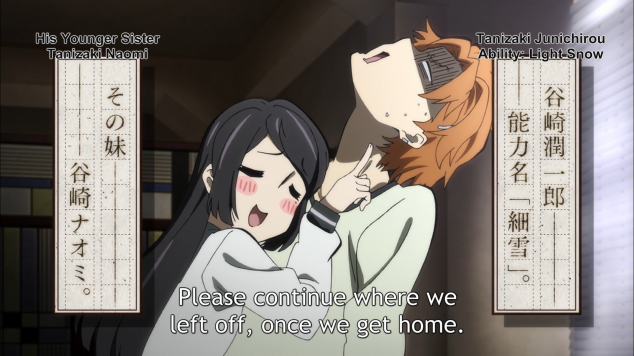 Tonally, Bungo Stray Dogs seemed to have its footing for a brief second before slipping on a banana peel and falling off a cliff. The wit and comedic timing seen in the first few episode completely evaporates and leaves us with silly chibi faces for no good reason at times not fit for any comedic relief. It’s almost as if the show is desperately trying to make sure it’s not taking itself too seriously, and by doing so only makes it harder for me to enjoy watching. There is a time for humor and there is a time for being toned down and real, and Bungo Stray Dogs has a hard time differentiating between the two.

Villains can be likeable. I’d argue that on some level, they should be likeable/relatable. Without that, we just have an object that only exists to be detested. In Bungo Stray Dogs, that object is Port Mafia. A heinous and ostentatious group of delinquents with quite a heavy reliance on brute force and explosives. Their main goal is to capture the Blue Tiger for reasons completely undenounced to the audience. Other than that, they just do evil things on a daily basis for no apparent reason. They’re as one-dimensional as it gets, and the good guys aren’t much better.

What is the Agency? What do they stand for? How do they and Port Mafia both exist without one destroying the other? All of these questions and more aren’t answered very well, if at all. Their motivation should be simple: To protect and serve. You know, just like the normal law enforcement. Instead they find themselves looking for motivation on trivial things such as: Why should they rescue their kidnapped teammate, and so on. Every moment spent in their office feels like a waste of time, something to fill up the episode’s timeslot before they get to the actual point. Every character in the Agency seems to have a lackadaisical approach when it comes to their job, as if the greater good isn’t enough to motivate them. In this regard, they’re actually somewhat more unlikeable than the villains.

Onto the main character, Atsushi is an orphan. You would know that by watching any single episode in the entire series. It’s apparently integral to his very being, something not to be overlooked, and so there’s a flashback of Atsushi in an orphanage that reoccurs throughout the whole season. It never changes or adds anything new to his character aside from the very first time it is shown. He is an orphan, he has been told he is a waste of space, and he kind of believes it himself. I guess it could be argued that it is an important part of his character, but even so it’s not nearly important enough to bear such incessant repeating. Oh, and as I said early, Atsushi is a Mary Sue. Somewhere along the lines he masters his uncontrollable powers. There’s no episode to explain this, nor is there even a quick training montage. Atsushi goes from having absolutely no control to holding his own in a 1v1 with the most dangerous villain introduced so far.

At its best, Bungo Stray Dogs is a fun action series that had a strong start and seemingly interesting characters. It managed to pull off some nicely timed twists and one-liners, despite the basic setups that hold it back in the long run. The characters also have some neat historical context for fans of Japanese literature.

At its worst, Bungo Stray Dogs is a poorly cobbled together setup for its second season, of which I am not excited for. The cast seems interesting and enjoyable when first introduced, but that fades away with every second spent with them. The villains are un-relatable garbage people with no redeeming qualities whatsoever, and the heroes are not much better. The amount of time wasted on the protagonists acting silly and squabbling in their generic office setting would have been better spent filling in the plot holes and leaps in logic that are all too abundant in this series. 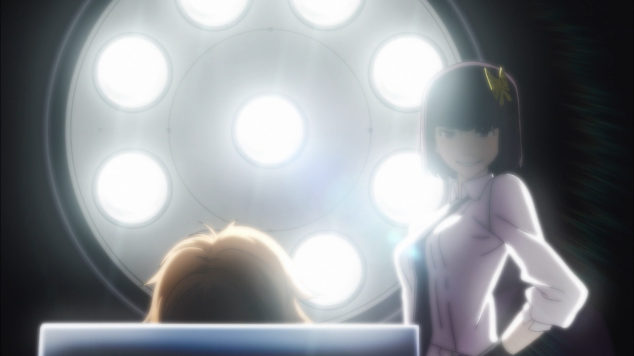 And that’s what I think about that. Maybe I was a little harsh on it, but what did you think about the season overall? And do you think you’ll be coming back next season? I’d love to hear your thoughts in the comments, and I’d also love for you to come back next week to read more about what I thought of this spring anime season. Thanks for reading!

2 thoughts on “All Bite, No Bark?- A Bungo Stray Dogs Review”