Hanasaku Iroha is a great anime that does a lot of peculiar things to set itself apart from the genres it’s tied to. Be it slice of life, comedy, romance, or drama, this show knows when to avoid classic tropes, and when to playfully indulge in them. The movie arc is a clear example of the evasion of narrative tropes, taking a somewhat familiar setup and giving it a much more subtle and unexpected conclusion instead of a simple but contrived ending.

It starts with Enishi’s plan to get Kissuiso (the name of the inn that they run) more publicity and bring in more customers. An innocent and fairly clever idea, Enishi has the best intentions when proposing a movie to be made with the inn as its primary setting. What’s surprising is how Madam Manager actually goes along with it. The entire time leading up to this point, she’s been the kind of person that’s not willing to take risks, especially when it comes to her son. She is a traditional person with a traditional mindset that runs her traditional Japanese inn as traditionally as possible, and isn’t fazed by the advancements of the world around her or the scathing reviews that criticize her business for being behind the times.

And yet, here she is, believing in her son for what seems like the very first time on a huge endeavor that, if successful, could result in massive change for Kissuiso. This is the first incredibly glaring sign that something about her is different. But that goes beyond just these two episodes, as this is just the beginning of what I assume will be resolved in the finale (I haven’t watched it yet, please no spoilers). We don’t learn exactly what’s going with Madam Manager by the end of this arc, because the arc isn’t really about her; it’s about Enishi.

Enishi is trying to accomplish multiple things with this movie plan of his: 1) Prove to his mother (and to himself) that he’s worthy of inheriting the inn 2) Relive/recreate a moment from his youth 3) Bring in more customers, because he does have good intentions and wants the inn to be successful.

At the end of episode 16 an ominous phone call is made. It rings while Enishi is gazing out the window and the girls are playing around in an empty pool as they take a break from washing it. The music changes to signify the foreboding nature of this call, but I think it would’ve been more portentous if the phone had caller ID, revealing that the person calling was none other than Enishi’s sister. This important not only because she is the infamous, far removed member of the family, but also because she’s long been thought to be the most suited to run the inn once their mother passes away. It’s clear that’s how Madam Manager felt, and it did not go unnoticed by Enishi who feels inadequate when compared to her. The dichotomy of the family is illustrated through the reoccurring flashback within the story arc. In this flashback, Satsuki and Enishi are in the pool as children. As Satsuki leaves the pool, she stands between Enishi and the sun, leaving Enishi with a view of her silhouette against the blinding light. He is literally in her shadow, and so that memory has stuck with him ever since. Although to him, it doesn’t seem like a painful reminder so much as an innocuous memory of what he once was. But back to the ominous phone call, Madam Manger is the one who answers it.

Satsuki calls to warn them about the movie, that something is not on the up and up and that they should cancel before they go too far. Madam Manager decides to not adhere to her warning, and she doesn’t pass the warning onto Enishi either. Then she asks what Satsuki would think about inheriting the inn, but quickly cuts her off before hearing an answer, reassuring herself that Enishi will be taking over once she’s gone. While Madam Manager’s reasoning for all of this is not explained (yet, I haven’t finished the series), it seems like this whole arc was a test for Enishi. And also seems like he failed.

The director Enishi was working with turns out to be a con man and the whole movie project was a scam. This is where Hanasaku Iroha diverges from what I would expect from the plot. There are, in my mind, at least two easy ways out for this story arc. The scam was somewhat of a curveball, but there was still a way to give it a cliché, albeit happy ending. Before that however, let’s talk about what I expected from just the setup alone. Oh, they’re filming a movie, I thought. Surely this will end with the staff of Kissuiso gathered around watching the finished product, and of course there would be a few hiccups and drama before they got there. Nope. Didn’t happen. The show even cleverly leads on to it with characters saying that this will be a summer to remember.

But now we know it’s a summer to be remembered for a different reason. The summer Kissuiso lost a lot of money investing in a sham. And while this was somewhat unexpected, Hanasaku Iroha could’ve gone the route of immediately trying to get their money back. We’ve seen Ohana run out and try to accomplish something on her own before, so why should now be any different? Well, these characters have grown up, and they know nothing good has ever come from acting rash before. Instead of having feelings of revenge or hopelessness, Hanasaku Iroha finds itself in a reasonable middle. Enishi panics like any normal human being would, but then is able to admit he made a mistake and move on with his life. This of course is met with a little resistance from Takako, whose gut reaction is to place the blame solely on Enishi. She of course knows that part of this was indeed her fault, and it seems her plan was to go out and catch the con artist before Enishi stopped her in the lobby.

The show didn’t need to end in a quest to bring Kissuiso back to where it started before this mess. The reveal of the scam itself wasn’t even a quick shock, but a slow burn. It was a delayed surprise, because something like this doesn’t just come out of the blue to turn your life upside down, or if it did it wouldn’t be very fun. First there are rumors, then there are facts, and then you have to recuperate your losses and try to bounce back. This arc is about Enishi’s struggle to finally step out of his sister’s shadow and be his own person, someone worthy of succeeding Kissuiso. He knows he’s a clumsy and sometimes foolish person, and that’s just something he’ll never be able to change. What he can do however, is learn how to pick himself up. 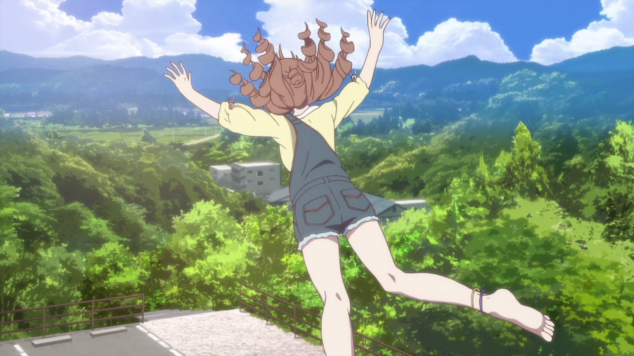 And I think he does that quite nicely, as he seems to be the voice of reason for Takako in the lobby. This is where Hanasaku Iroha indulges in tropes. Through character building, Takako is developed as this character whose quirk is randomly speaking English because she thinks it’s impressive or cool. And so when Enishi and Takako engage in a heated confrontation, Enishi does the good old switcheroo and throws in some random English, to which Takako responds that spouting random English lines doesn’t make you cool. It was a cheeky gag, but one I enjoyed all the same.

That last paragraph didn’t really need to be there as the one before it seemed to wrap things up nicely, but I really wanted to bring attention to that joke. I love dumb tropes like that, and I love Hanasaku Iroha. But what did you think? Have you seen Hanasaku Iroha? If so, tell me your favorite character, favorite OP/ED, or anything else you want to say about it in the comments below. If you haven’t seen it, tell me if I did a good job of selling you on the show because it’s definitely a much-watch if you love slice of life rom-coms like I do. Thanks for reading!