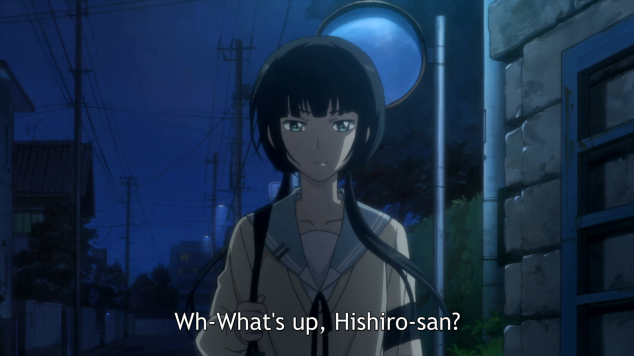 Within every episode so far, there has been a reminder that Kaizaki is old. Usually in the form of a half-baked joke, ReLIFE can’t seem to get away from just outright telling you that this guy is actually a 27 year old man that looks like a high school student. Now, considering this is the entire premise of the show, and that we’re already on episode 5, you’d think we’d be past the unsubtle explanations. Things like his actions and the way he talks should be enough to illustrate the point. I just don’t want to see the same lame joke anymore of someone acknowledging he’s like an adult only for his inner monologue to have that gut check moment of wondering if they’re on to him. No one’s on to you, Kaizaki. Now let’s move on.

The stolen bag felt like a weird plot point. It wasn’t nonsensical or “bad” in anyway. But it definitely felt strange. A frustrated girl steals the school bag of her rival in a malicious attempt to get back at her. Then she runs into the rival’s sort of boyfriend only to fall down the stairs but not before the guy catches her so they share the fall. Finally, the rival walks down to investigate the noise she heard only to these two at the bottom of the stairwell, in some sort of embrace. I don’t know, to me it just sounds too comical when read out loud. But it worked, and the story progressed to the point where Chizuru and Kariu become friends. 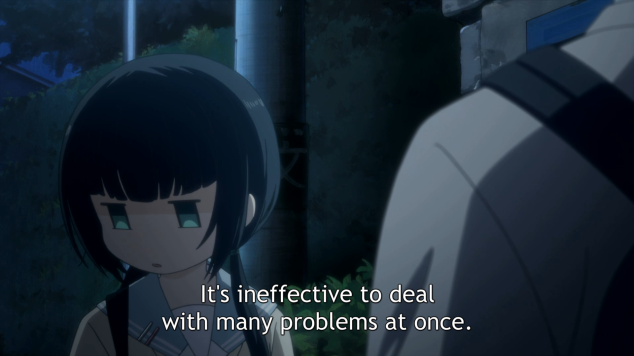 Before all that however, Kaizaki and Kariu have a meaningful discussion in the nurse’s office after waking up from the fall they suffered. This is when ReLIFE subtly shows Kaizaki’s adulthood, with the lecture he gave her coming from previous adult experiences in his life. I can’t help but feel the flashbacks used to manifest his knowledge are all too convenient though, drawing from a random memory to help the situation he’s in today without any prior setup. It would’ve been much more impressive if it didn’t feel so out of nowhere. Perhaps if the flashbacks were shown much earlier, or later, it wouldn’t feel like such a tack on.

And then there are flashbacks to just previous moments in the show, be it things from an episode or two ago to as close as 10 FUCKING MINUTES AGO. While a reminder of Kaizaki explaining to Kariu that Chizuru was trying for a friendly smile and not an evil smirk from episode 3 might be appropriate, a flashback to Kaizaki telling her to ask Chizuru to smile from 10 minutes ago isn’t. If anything, it’s a little insulting that the show assumes its audience’s attention span is so short.

Then we move on to the best part, Chizuru saying “…after all, we’re friends” and giving Kariu a real smile for the first time. Adorable, albeit a tad too on the nose. Still, I liked it, and really liked what we learned next. Apparently the way Kaizaki affects those around him will stick with them even when their memory of him is no longer there. The lessons they learn will be with them forever, and that puts the stakes of the show in a very different place. Kaizaki now has a reason for being there aside from his own self-satisfaction. He has the knowledge to truly help these students, and now that he knows he can create positive change for these people, he’s going to try harder. I mean, he probably would’ve anyway considering he’s sort of the token nice guy, but now there’s proof that it’s not all going to be for nothing.

So Kaizaki showed Kariu that trying to pull someone down rather than raise yourself up is essentially admitting defeat. Kaizaki also learned that sometimes you have to let things play out instead of trying to make everything go smoothly, although that was more a reminder from a previous episode that ended up resonating with him in the certain situation. Also, Chizuru is officially in love with Kaizaki thanks to that cheeky little thought in her head that she didn’t express out loud to him. Seeing him holding Kariu at the bottom of the stairwell, she wonders why she felt a pang? COME ON!