Before we get into the surprising (and exciting) narrative developments within the final episode of the first (and probably not intended last) season of ReLIFE, let’s first give a little attention its overall animation quality. ReLIFE hasn’t really been much of a visual spectacle in all of the episodes leading up to this point. It was clear that the show had somewhat of a low budget from the get-go, and a lack the ingenuity to still make something extraordinary within its confinements. Now, I wouldn’t characterize the visual art of the show as anything less than pleasing, but it’s certainly nowhere near the top dogs of the industry in terms of creating immersive and awe-inspiring scenery and sequences.

The only thing ReLIFE seems to be particularly competent at in terms of visuals is character design, and even then the show often relies on comical still frames and chibi faces rather than putting in the effort to portray actual facial expressions and emotion. At first it comes off as a cute and charming goof, but through overuse the sight of something like Chizuru’s blank stare in exaggerated chibi form can become a bit tiresome. Aside from the overused visual gags, at least ReLIFE is good at creating visually distinct and memorable characters. This normally isn’t very hard, as you could just give every character a different hair color, but this show went a bit beyond that to give each of them unique styles and facial features like that mole on Chizuru’s neck or Honoka’s weird, pencil-lines eyebrows. 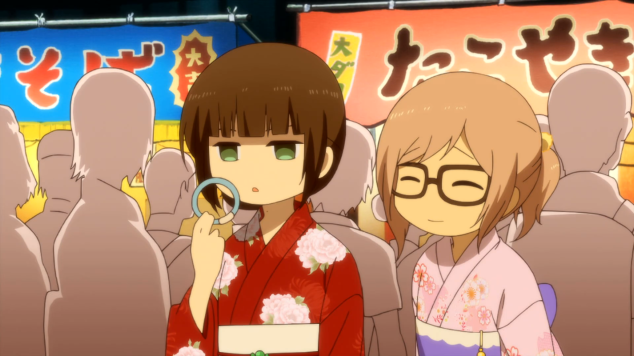 But back to the overall animation quality of the episode at hand, I’d say it was pretty subpar minus the fireworks show. Festivals are meant to feel lively, but sadly that doesn’t come across well when the crowd around the main characters aren’t given much (if any) animations. Still frames that are supposed to depict the living can turn out to have the opposite effect, making the show and the world that revolves around these core characters appear lifeless and unreal. Throughout most of this final episode, background characters are given almost no movement, which is a major problem when trying create the feeling of a bustling festival. One particularly standout frame that I caught near the beginning was one of a panning overview of the crowded festival paths. The frame was actually used twice in almost rapid succession, and it just stood out like a sore thumb. Animating crowds is a daunting tasks, but there are clever workarounds that ReLIFE fails to utilize. (Ooh, another good idea for a feature: Crowds in anime)

As for the narrative, let’s go in the order of events transpired. Oga and Kariu’s confession happens much sooner than I had expected, wrapping up at around the 7-minute mark. This obviously goes to show that their moment was just the setup for something much more important. But before we get to that, let’s look at how it all shook down for Kariu and Oga. While not the grand confession scene that I probably would’ve come up with, the moment they share is done in an appropriately quirky way, in regards to their characters specifically. It’s by no means an intimate moment, as Oga just blurts out his feeling while they both are leaning on the ledge of a bridge with plenty of passerby behind them. At first I was surprised by this approach, but soon after I found that I actually was kind of delighted by this clear evasion of clichés. The episode wasn’t a series of misunderstandings and obstacles that get in the way of the eventual isolation and confession of these two. Instead, ReLIFE goes for something much more real and true to its characters/style. ReLIFE’s never been about grandiose schemes and completely misfortunate characters, so it makes total sense for Oga and Kariu to end up like this, and it was still quite pleasing to behold.

Moving on, there are a couple demonstrations of flashbacks in this episode that need to be addressed. One is executed in a really clever way, whereas the other is the kind of flashback I absolutely abhor. It’s one of those flashbacks that I talked about in a previous post, the kind of flashbacks that act as reminders and nothing else. Well, this episode had the most egregious example I have ever seen. Chizuru simply states to Kaizaki that she was glad she met him. Then that moment with a close up on her lips replays ONE FUCKING MINUTE LATER! AS IF I COULDN’T REMEMBER THAT! But that’s simply worth a mention because of how stupid it was.

Now onto a flashback sequence that’s not so stupid. If anything, it was downright brilliant. Chizuru has a great moment while talking to Kaizaki where she recalls everything that’s happened in her mind (not aloud). In reverse countdown fashion, Chizuru goes through the entire season through flashes within her memory, but it’s not clear that it’s her own memory until the very end because the moments she remembers all have Kaizaki in it, and so perhaps could be seen as his own recollection. This leads to a great reveal, one where the camera pans up from the legs of a person in a business suit, in an alley, where we remember it Kaizaki first get approached by Ryou. 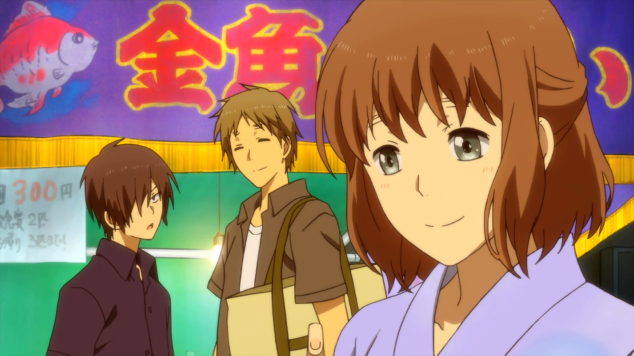 Except it’s not Kaizaki. It’s Chizuru. This. Is. Good. Perhaps even great. Needless to say, I was awfully impressed. The show had a plan after all, and a very clever workaround to the deadline narrative it had set for itself. Now it doesn’t necessarily need to break its own rules to give Kaizaki and Chizuru a happy ending, because surprise-surprise, they’re both adults. They don’t know it however, so the idea that it might be “wrong” for an older person to date a high schooler is still in effect as well as the understanding that each other isn’t going to remember them. And there’s plenty of tension between the two because of this.

Then there’s the fireworks show that this great realization was somewhat paired with. Not only that, but Chizuru telling Kaizaki she was glad she had met him caused him to think about his own timeline and how his ReLIFE was going to come to an end. It’s deliciously ironic because her comment actually came from her own realization of the end and how everyone she’ll lose everyone she’s befriended when her ReLIFE is over. They will have each other when all is said and done, but they don’t know they’ll have each other, and so it’s an incredible secret that the audience gets to be let in on while the two protagonists come to terms with their realities. It’s like an assured hope masked by a feeling of dread and mournfulness. 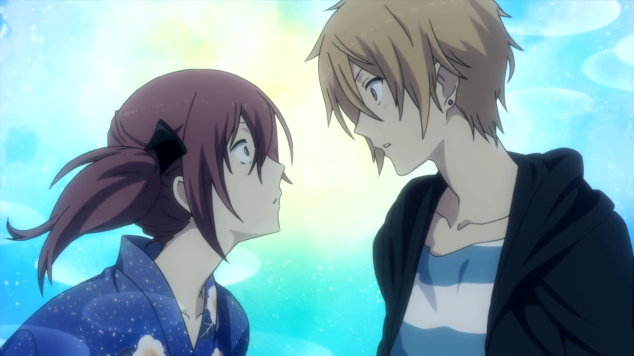 Man, this finale really brought this series together in a way that I didn’t expect (and barely thought was possibly). While the animations weren’t the strongest, the plotting and execution still managed to leave me grinning ear to ear. I’m not sure how they could make another full season of this (because it seems so close to the end), but if they do I will gladly watch. Though I think an OVA or feature length film might suffice, and if that does indeed happen, I hope the story can afford the quality animation it deserves.