Before we get into this episode, I’m going to break it down into two simple parts: Pool, and not pool. The pool part of this episode is the pretty much the obligatory pool episode that finds its way into seemingly every modern anime out there. I obviously hyperbolize, but it does feel like a majority of high school slice of life series have a pool or beach outing in at least one episode. Now, I know some consider this to be pandering and “fanservice”, and for the most part I’d agree it usually is. However, a lot of people tend to dismiss these kinds of moments because, in a very simplified way, it’s needless sexualization.

And while maybe it is, I wouldn’t necessarily deem it unworthy of existence. I’d say that if you’re the kind of person that would actually advocate for the removal of such “smut”, you might want to extend that same courtesy to violence, vulgarity, and anything else that makes you uncomfortable for personal and/or illogical reasons. You see, the removal of everything unnecessary to a plot would most likely be the undoing of the entertainment itself, because you can extend that process to everything that doesn’t get “Point A” to “Point B”. Pieces of dialogue, extra characters and visuals, music, multiple camera angles, and really anything that doesn’t have a purely objective reason behind it you can remove, but your show/film/story/whatever is probably going to suffer because of it. 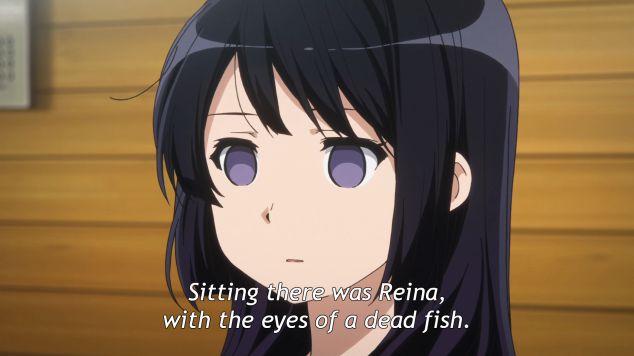 I have plenty more thoughts on fanservice, but I’m going to save it for now so I can actually talk about this episode of Sound! Euphonium 2. The first part takes place in a pool, and we get to see all the girls in their bathing suits playing around, enjoying their short vacation, and coming to realize of their physical developments. While this is done through close-ups of Reina’s swimsuit body and comments made by her friends of how she “really fills it out” (paraphrasing), I find it worthy to point out that this moment seems to have an objective (aside from the obvious one). Reina growing out of her swimsuit and Kumiko giving notice is a subtle way of foreshadowing change. This is especially important for Reina, as she seems to the one going through the most of it, both physically and mentally. She’s already quite different from the Reina we came to know from the first season, as she’s much more comfortable now when it comes to expressing her emotions (particularly in front of Kumiko). Reina seems like a more open character now, and I don’t think that’ll be the end of her changing as a person by the time this season is over.

Another important moment at the pool was the talk Kumiko had with Nozomi (the girl that quit). Through this conversation, Kumiko begins to truly see her side of the story, and actually offers to help by the time she’s done explaining herself. Not that Nozomi’s trying to use her to get her back in the band, Kumiko’s more of the one that’s prying. Or so it may seem. But it’s apparent that Nozomi still has a love for band, and even though she understands and accepts that this is punishment for when she left Asuka, she still can’t help but want to rejoin. In a way it makes Asuka look like she’s being too harsh, and it seems Kumiko sees it that way as well. She’s offers to ask Asuka herself and Nozomi humbly declines, but Kumiko’s probably going to do it anyway.

Moving on from the pool, we follow Kumiko as she has a chat with Mizore (the one that plays the oboe) in the middle of the night. The two can’t sleep, and as Kumiko takes a walk outside the sleeping quarters she finds Mizore quirkily playing a rhythm game on her phone without the sound. Anyway, these two have a lovely conversation underneath the stars, and through it we learn some very significant details about Mizore. She hates competition, even though she’s in a school band that’s trying to make it to nationals. Nozomi and other reminders of what happened (like the song played at the competition before Nozomi left) have been troubling her, and it appears things aren’t about to get better. Mizore doesn’t even know why she’s still in the band, as the promise she made with Nozomi is already broken. But she keeps on playing, and because Kumiko hasn’t seemed to fully caught on to Mizore’s inner struggles, it might not be long before she finally breaks.

Finally, my personal highlight of the episode (that’s right, it’s not Reina in a swimsuit): The moment Kumiko and Reina share in bed next to each other. Not only extremely adorable, this is yet another moment of Kumiko and Reina showing how far they’ve come. Whether they turn out to be gay or not, I don’t really care. I just truly admire their wonderful friendship, and I hope I never have to see it end. So, as they lay on their separate floor mattresses in a room of sleeping bandmates, they scooch together so that they can whisper to each other. Reina expresses her concerns over the attractive new woodwinds instructor and how she might take Taki-sensei away from her. By confiding in Kumiko, she can come to relax about it a bit. And of course, Kumiko had already noticed that Reina was distraught over this a while ago, as she’s become much more in tune to what Reina’s feeling at a given moment. One benefit of their friendship is that we get to understand Reina better through Kumiko. And that’s great, because if you’ve read my review on season one, you know that Reina is my absolute favorite.

And that’s what I thought about episode 2 (mostly). If you’d like to hear me discuss more about my thoughts on fanservice, say so in the comments below! Or just tell me what you thought about this latest episode. Either way, thanks for reading.