We start this episode with a strange confession from the woodwinds instructor. Niiyama-sensei apologizes to Mizore, admitting she was wrong about something she said to her earlier, that she “convinced herself there was a limit to Mizore’s potential”. It seems pretty odd that an instructor would give up on a student like that, but it gives Mizore a chance to prove her wrong, which she does but not seemingly in response to her sensei’s words. While the idea of having one’s limits is brought up by the teacher, it seemed to be just a way to show how far Mizore has come and the skills she’s developed through mindless devotion. Wouldn’t want to cram too many thematic elements into this show, after all.

Onto the meat of the episode, Nozomi finally comes face to face with Mizore. There’s a little tension built up by if and how long will it take to reach her in the episode, but when she does it’s brutal (as well as a bit melodramatic). Mizore takes off, Nozomi is not really sure why but can clearly tell something is wrong, Yuuko confronts Nozomi, and then she takes off with Kumiko to search for Mizore. Kumiko finds her first, accompanied with a cool three-dimensional pan shot going around the corner of a desk to find Mizore curled behind it. It was like something from a horror movie, and while I didn’t really think there was any grand meaning behind that shot, it did serve as an exceptional use of merging 3D without feeling shitty like most CG in anime.

Anyway, it’s from there that we begin to have all the missing details of the relationship between Mizore and Nozomi filled in. You see, Mizore’s personality is not one suitable for making friends. She’s quiet, straightforward, and doesn’t know how to reach out to others (like me in real life). So when Nozomi casually broke through to her, it came off as to Mizore as much more than just exchanging pleasantries. To Mizore, she was everything, but to Nozomi, Mizore was just one friend of many. They joined band together, and then one day Nozomi decided to quit without saying a word. Mizore wasn’t even offered an explanation, yet she continued on with band despite the hole left in her heart and her passion all but annihilated.

Back to the present, she finally realizes the reason she keeps playing: because it feels like the only thing left that connects her to Nozomi. And Yuuko’s just like “what I am, chop liver?”. The important thing is that Mizore is touching on a very important theme right now: something to play for. These characters all must have a reason for wanting to be in band, working to improve themselves, and yearning to become champions, and now Kumiko understands from Mizore that everyone has something personal that fuels them. Putting that realization on the backburner for a little bit, Nozomi makes her entrance and gives Mizore what to be honest is a pretty shitty explanation as to why she didn’t tell her. It was because she saw how hard Mizore worked and didn’t want her to quit alongside. Could’ve just told her that in the first place, but at least now Mizore finally has closure and her arc can come to an end.

But that’s not the end of the episode. Oh no, no, no, we still have to get the great and malevolent Asuka’s thoughts on the matter. After all, it was Asuka’s plan to just keep these two separated until finals, for the good of the band she supposed. Asuka didn’t have the foresight, or perhaps just plain optimism to see that these Mizore is not going to overcome her problem without facing the trouble head on. This shows the lack of faith Asuka may have for her bandmates, and perhaps how little she actually cares about them. She brings up the fact that both Nozomi and Mizore were, in at least some respect, both being selfish, which may turn out to be incredibly ironic as she’s starting to appear like the selfish one herself. The reason she’s able to throw out these remarks so casually may actually be because underneath that sharp, comedic exterior is actually quite the self-aware narcissist.

Kumiko appears to be catching on though, as she grips her fist when Asuka lets a couple of abrasive comments out about everything Mizore went through just now. What’s immensely fascinating on a personal level for me is how much I can connect to Asuka, especially after this melodramatic episode. While I did feel for the characters and all they were going through, I couldn’t help but think in the back of my mind how they might be overdoing it. The running, the crying; it all felt a little too much like a cavalcade of contrived emotional triggers. But then here comes Asuka ready to trivialize the emotions of her classmates in a couple sentences or less, and in doing so made me question both her and my own perceptions. You know, like when you see someone acting like a jerk and then you realize you’ve done that exact same thing once before, making you feel like quite the asshat. 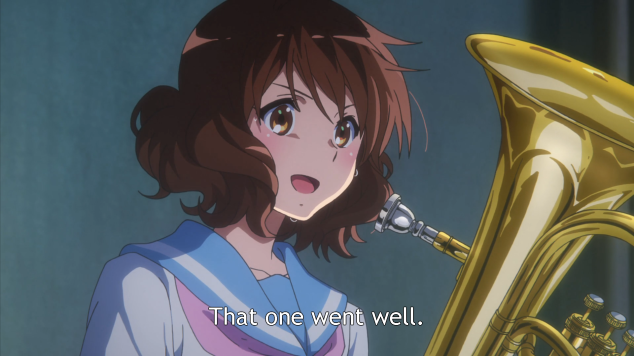 And that’s it. With the story arc finally finished, we can already imagine what might come next as the end of Mizore’s troubles seem to be only the beginning to us understanding Asuka…and I’m shivering with excitement.