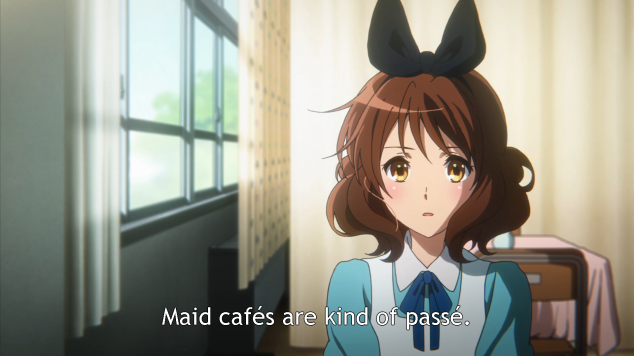 First things first: the opening theme of this season changed. It used to be all black and white and now they’ve finally adopted color. As to why this was transformed, I’m going on the assumption that it’s supposed to signify how the band is starting to feel like the idea of winning Nationals has become even more of a reality after their recent victory. You know, cause black and white isn’t what real life looks like, and so the transition to color means…well, you get the picture.

Anyway, it’s school festival time and the livin’s easy. It’s all fun and games, plus we get to see plenty of beloved characters in their maid café uniform. And we’re talking some crazy adorable stuff here. Kumiko, Sapphire, and Hazuki trying to make ends meet with their quirky Alice in Wonderland style café, then there’s Mizore and Nozomi working in a different café and Mizore’s really not cut out to be a waitress but it’s cute to see her try. I wasn’t really up on the whole “Mizore and Nozomi suddenly back to being best friends” thing at first, but after seeing them together like this, in maid outfits like this, I can’t help but melt in the face of yet another beautiful relationship in this show. 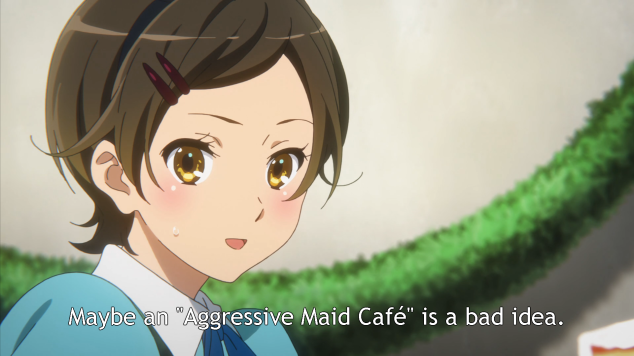 Aside from gawking at maid outfits, most of the time spent on the school festival part of the episode was basically just staying up to date with the characters and their relationships. As I said earlier, Mizore and Nozomi are going strong, then there’s Yuuko and Natsuki having sort of a friendly rivalry thing, and finally we get a glimpse at whatever the hell might be between Kumiko and Shuuichi. At this point, I really hope they never become a couple. Not because I “ship” Kumiko and Reina or anything, it’s just that Kumiko has really shown no interest in him and it’s not like she needs him for anything. Kumiko don’t need no man, she’s a strong, independent euphonium player.

The festival ends up being the calm before the literal storm, as a typhoon rolls into town and school is cancelled for a day. It’s during this time that Kumiko has a bit of a falling out with her older sister, who came home after quitting college. Kumiko remembered that she once berated her for wasting her time on band and not studying to get into a good college, so she calls her out as a hypocrite and the sister walks out of the room. I don’t know if this drama is really going to go much further however, as it mostly seems to be just a plot device for getting Kumiko to go for a walk outside in the rain. 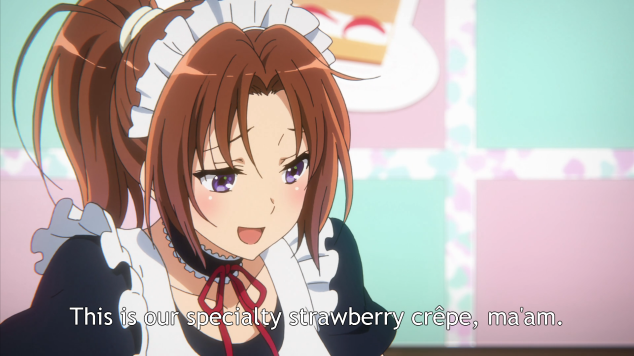 During this walk, Kumiko runs into Taki-sensei at a flower shop that for some reason is open in the middle of a typhoon. They talk, he picks up his flowers, and then drives Kumiko home when her umbrella breaks from a powerful gust of wind. In the car they have quite the interesting conversation. Kumiko pries a bit, as seeing a photo of Taki in his youth with some woman and noticing his wedding ring from earlier on brings her to a point where it would almost be wrong not to ask. So Taki fills her in with some backstory. The woman was his wife and she went to Kitauji just like him when they were growing up. She was apparently more into band than he was, and wanted desperately to take home the gold while she was still there. After that dream failed to become a reality, she always wanted to go back to her school as a teacher and lead the following generation to victory. Sadly, she died, leaving Taki to fulfill her wish.

It’s not exactly clear whether or not Taki’s motivation to instruct is completely reliant on the unreached dreams of his late wife. Right now it serves as an apparent motivation, but it’ll be interesting to see in due time if he himself actually has a passion for music and teaching, instead of just a passion for his lost beloved. 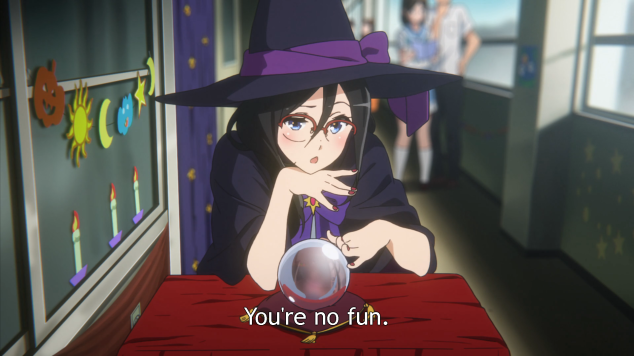 Just a few more things before I wrap up here, I’d like to point out something about Kumiko that I really enjoy. Her narration throughout the season has been delightful. I love the eloquence and meticulousness in her thoughts, it often feels like I’m reading the inner monologue of a great visual novel protagonist. The writing is exact, and it shows an acute understanding of the world around her that I probably wouldn’t have guess she had if not for the narration.

Then there was the meaning behind the flowers Taki picked from the shop, which would have been a cool easter egg had the show not gone and explained it in the end. That being said, it would’ve totally gone over my head as I’m not even close to the most amateur of floral enthusiasts.

Finally, we get the tip of the spear for what’s coming next. A mention of third-years retiring and an ominous shot of a woman coming to knock on Asuka’s door. Hopefully this is the Asuka arc I’ve been waiting for.

One thought on “Sound! Euphonium 2, Episode 6”