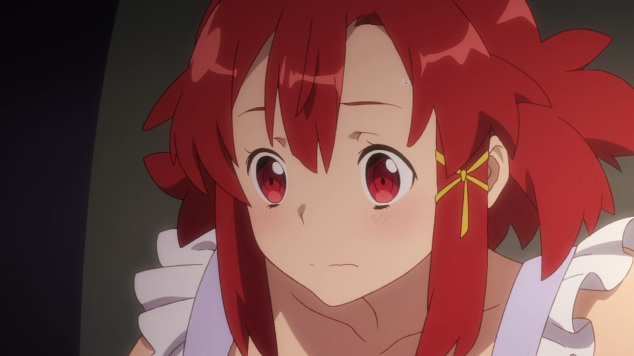 If you’re new to this blog, let enlighten you as to what exactly is this series of posts. Every so often I come across anime that I deem to be “bad”. Usually I’ll drop a show right away if I see nothing of value in it, but more often than not shows that tend to be “bad” aren’t inherently irredeemable. For the most part, anime that prove to be unlikeable turn out that way because of incompetent execution, rather than a lack of a compelling concept. So, when I find myself sitting down and watching anime like this, feeling a bit disappointed in all the storytelling choices made since that intriguing first episode, I can’t help but wonder what could’ve been. That’s why I created this series: To express what I think could make some not-so-great anime live up to the potential that I saw in them. So without further ado…

If you read my blog regularly then you know exactly what my problems are with this show. But for the sake of any newcomers, I’ll happily list them off again. Izetta: The Last Witch does not understand or care about what realistic war entails. It thinks that a witch that rides a rifle like a magic broom whilst dogfighting German warbirds somehow relieves all the death and despair in the battlefield below her. Still, Izetta manages to be a symbol of hope for the soldiers, but in a way that’s reminiscent of the worst kind of Superman stories. Her weaknesses are arbitrary and she can do no wrong despite all the people she kills. Also much like Superman, she’s completely overpowered. The abilities she wields do not appear to have limits, and while she doesn’t seem to be invincible, the show hasn’t shown her remotely close to death either. At the most, Izetta seems to suffer from very mild exhaustion when fighting and her clothes manage to get beaten up even though she never been hit by anything. Aside from all that, the last thing about the show that got on my nerves was its terrible character establishment, or rather, the abundant amount of characters being established that ultimately were of no significance. The show gave brief focus on so many characters that all it really managed to do was detract from the two that actually matter.

So here is how I would change that: First off, Izetta needs to lose some power. What can stay is flight and telekinesis, but the telekinesis needs to have limits of how many things she can carry at once as well as how heavy. At the very least, she shouldn’t be able to lift tanks with ease. Secondly, I want her to not be concerned with the politics of war at all. In the show, she’s friends with a princess who is now the leader of a nation, and so the princess needs to think about how to utilize a magical entity within industrial warfare. It would take a lot to make a plausible plot out of this, as it deals with the repercussions of imposing magic on a war of technological enhancement. Basically, a premise like this could easily turn into “the witch stopped all the bullets and defeated all the bad guys and saved the day the end”.

I certainly wouldn’t be up to the task of writing this story from that specific point of view. However, Izetta: The Last Witch tried anyway, and failed miserably. When executing missions that include Izetta as a crucial role, the show just ends up looking extremely naïve in terms of its understanding of what war is. What I would do instead is simply change the perspective of the diplomat to one of a soldier on the front lines. I want Izetta to be close friends with a soldier, not some princess in a castle. I want her to see the horrors of war first hand, and only concern herself with the wellbeing of her friends and allies, rather than be motivated by an out-of-the-blue devotion to a nation. Through this perspective she can learn so many things from her comrades, such as: the horrors of war, the power of camaraderie, being a pawn in something greater, and so on. This, I feel, would be a far more compelling story than what the show is so far.

Damn, I really had my hopes up for this show. While I wouldn’t actually classify Magical Girl Raising Project as “bad”, I certainly wouldn’t consider it great either. The problem with Magical Girl Raising Project is one that I thought it wasn’t going to have at first: It’s just a death game. At first it pretended like it wasn’t, with it’s strange arbitrary rules that stated it was just trimming down the amount of magical girls in a region. The fact that the girls die once they lose only came as an unpleasant surprise later. Not once were they told or pressured into killing each other, but eventually that was all it became. Calamity Mary pretty much embodies every issue I have with this show. She is “mindless destruction” incarnate, which is inherently something I’m usually not interested in. “Thoughtful chaos” is something far more intriguing to me, as having a method to one’s madness is far more enjoyable than just killing for no reason. Villains should be relatable on some level. If they’re not, they simply become a very simple problem with a very simple answer. In the end, the villain will die, but there will be no compelling reason to keep watching to that point because the audience already knows there is only one suitable outcome.

In my version of the show, I would make sure that the original course I thought this show was on wouldn’t change. It would be a show about magical girls coping with living at the cost of the lives of others. There would be much more focus on characters rather than action, and every death would not be at the hands of another, but simply from time running out. I want a weekly tribunal as if it were a reality show with a contestant to kick off every week, and I want to follow those losers until their final moments. I think Magical Girl Raising Project was at its best when it was like this, first the dreamer magical girl and then Ruler. Ruler’s demise was especially entertaining because it involved deception rather than any sort of brute force. It would be interesting how the game would evolve without characters like Calamity Mary and Cranberry, who are far too quick to resort to murder. Furthermore, I wish the secret of magical girls dying once they lose was kept that way for longer, as I think that information could prove to have some quite fascinating effects when only a select few learn it at first.

Oh, and one more thing I would change would be the avatar for Love-pon. It’s so obvious just from looking at him that things would go wrong in this anime. Perhaps a design that doesn’t scream “contrived half-innocent half-malicious god creature” might make the show feel less generic and offer more of a shock when that big revelation comes around.