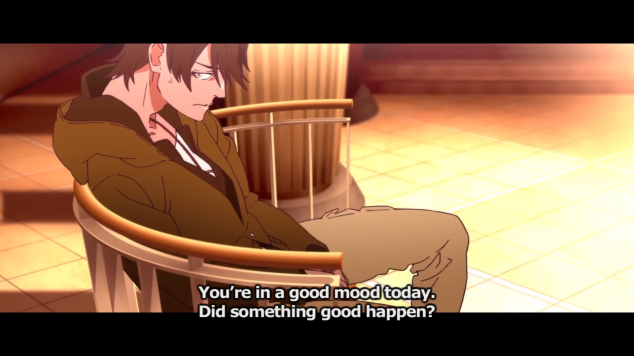 Author’s note: What you’re about to read is my final paper for my film studies class. In it, I dissect the editing style of the film as well as what it means to the larger narrative. I’m glad I got to choose whatever film I wanted, as that meant I could immediately gravitate towards any anime movie I wanted. Naturally, Kizumonogatari was what I decided upon. Anyway, because this was meant as a final project, I wrote this paper in a way that explains the film and characters to those who wouldn’t have seen the movie beforehand. I expect all my readers to have seen this glorious masterpiece already, so you can just kindly ignore parts like that. I mean, of course you know who Kissshot Acerolaorion Heartunderblade, because who wouldn’t? Haha! On a serious note however, I’d like to thank you all for giving my work the time of day. Never would I have expected the amount acknowledgement I have received for this blog, in only its first year! I probably would’ve tried to keep writing on a weekly basis even if no one read my work at all, but I must say it’s been pretty damn invigorating to know that people care. Thank you so much, I hope you all have a wonderful holiday and a great time watching anime alone in your room, or whatever it is people do during the break. Oh, and feedback for this paper would be much appreciated. Bye!

Editing, when not used solely to establish continuity and seamlessness between shots, can greatly add to a film’s narrative and sense of characters. What a character is thinking/feeling could largely be conveyed by editing alone, with eyeline matches and cuts from different camera distances for example. Kizumonogatari utilizes discontinuous editing to communicate a number of ideas, and the scene I’ll be analyzing today has two in particular: fear and anxiety. 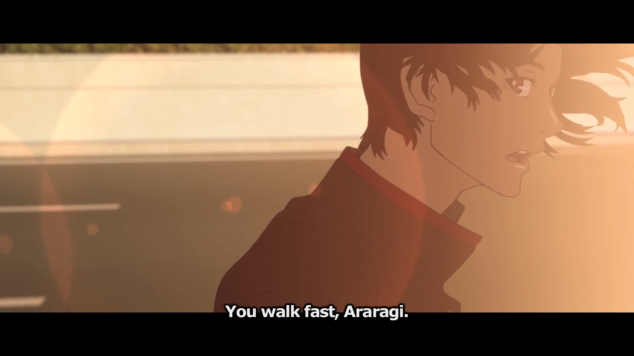 As a brief summary, this part of the film takes place in the subway station where the main protagonist Araragi stumbles upon a trail of blood and follows it down to where the trains arrive, finding a woman vampire with freshly severed limbs laying helplessly alone in a pool of her own blood. He approaches her and through a short conversation comes to the realization that to save her he would need to give the entirety of his blood. That is the point at which I will start this analysis.

Once Araragi learns what he would have to do, the sequence of shots becomes faster and less continuous. Shots go from close-ups of him sweating and breathing heavily to medium shots of him running away in slow motion, extreme close-ups of his pupil bouncing in every direction to a shaky POV shot focusing in and out on the escalator to escape on, then to a medium shot of him standing and shaking, seemingly still in the place the sequence had started, even though there had been a shot of him running away. Shots like these keep rapidly cutting back and forth, emphasizing how frantic Araragi’s mind is when looking for a way out.

Then when he’s finally made the decision in his head, the editing frenzy stops. The time between cuts slows down as the vampire (her name is Kissshot Acerolaorion Heartunderblade by the way) comes to the harsh realization that this human is not going to help her. She screams, cries, and flails what’s left of her limbs, splashing blood everywhere. As Araragi backs away she continues to weep and beg, and we get one POV shot of her swaying view of Araragi, the camera focusing in and out. The sound of a baby crying plays over scene and continues to as he runs away, insinuating that he will come back because a baby crying is an almost universal symbol for something that cannot be ignored. (I know, I’m not supposed to be analyzing sound design, I just couldn’t ignore it either).

One important thing to take away from this is that Kissshot doesn’t receive a similar editing treatment as Araragi. There is not as much editing put into emphasizing what’s going through her mind, and that’s something that goes for every other character introduced in the film as well. Kizumonogatari stresses the individual, and so the discontinuous editing is used to add solely to Araragi’s sense of character, transmitting his thought process without, or sometimes in addition to, an inner monologue. Furthermore, this adds to the concept of him as a human, establishing a starting point for him as a person that will change throughout the story, tying into one of the film’s major themes: losing one’s humanity. 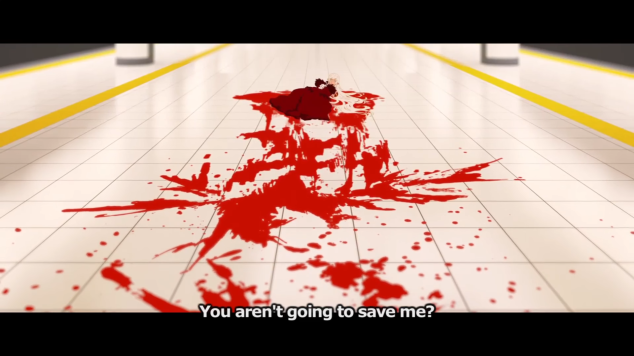 Aside from that, the editing tends to express the acceptance of the absurdity of human existence. There is no instance in this film where the editing, or any other aspects of film form, attempt to suspend the viewer’s disbelief. In the example scene, there are a few moments between shots where completely non-diegetic imagery is added in. When Araragi starts to run away, a depiction of a woman’s eyes zooms in for a brief second. At the start of this example the film actually cuts to a red screen with white letters in the center that just say “ROUGE”. Many times throughout the movie there are similar black screens with the word “NOIR” in the middle. The film is always reminding the audience that it is indeed a film, and even in its darkest moments it can’t but add a tinge of silliness. This goes alongside the animations in the mise en scene, which are always range from a little to extremely exaggerated.

Whether it be fear, anxiety, or humor, editing can portray it all, as proven by Kizumonogatari. When utilized correctly, discontinuous editing can help create a much stronger sense of feeling. It can also come as a welcomed reminder that what we’re watching is indeed a film, rather than something that just breaks audience immersion.