The first season of Sound! Euphonium was “utterly fantastic” (quoting myself from my review of season one). It took me by surprise and delivered something thoroughly thought provoking. Characters were handled flawlessly, hackneyed themes were dodged with grace, and not a moment of my time felt wasted as I embraced its concepts of what it means to be a part of something, and what it means to be special. It was undoubtedly a brilliant season, and unfortunately for KyoAni, the sequel would have to be held to those standards. So that begs the question: Did KyoAni reach or surpass the heights it set for itself with season one?

Short answer: No. Long answer? Well, it all starts with the character arcs. Sound! Euphonium 2’s first arc focuses on a character that’s been in the band all along, but hasn’t gotten a single spotlight up until this point. Mizore is an introverted oboe player with a lot of potential despite the deep misery that weighs her down. Without getting too into the details, I found myself actually liking this character a lot, despite how minimal her relevance to the overarching plot may be. At the very least, her story put a couple of important dynamics and themes into play, ones that easily resonate through the rest of the season. It’s during this arc that we begin to see the relationship between Natsuki and Yuuko (which will be important later on), as well as our first closer look into Asuka. The themes are a little more thinly veiled in this arc, as it pretty clearly introduces the ideas of “what people play music for” and “loving or hating competition”.

Between the two main story arcs of the season is an interesting and seemingly out of nowhere look at Kumiko’s older sister, Mamiko. The general themes that surround her are ones of regret and misunderstanding adulthood. These of course are conveniently in Kumiko’s mind as she confronts a similar issue with Asuka, who finds herself stuck between the wishes of her overbearing/abusive mother and her own desires. While I’m certainly not a fan of typical ham-fisted attempts at emotional resonance through the introduction of broken homes and public displays of abuse (slap to the face), Asuka’s stupid mother manages to not be visually around long enough to irritate the crap out of me. She only actually appears for one episode, although the presence of her ideals last for far longer.

Those ideals happened to be the same ones that deluded Mamiko into thinking that giving up her dreams for studying and the safer bet of a financially stable future through education was the best course of action, only to leave her with nothing but regret. The idea of adult responsibilities and expectations, and how those thoughts can scare and bully people into not taking a chance. Asuka’s mother forces her ideals on her daughter, driven by this delusion as well as an implied spite of Asuka’s father, who actually did obtain the life he wanted as a musician. Luckily, the whole situation is handled without the terrible mother, in a way that stresses Asuka as the only person that can choose for herself, because that’s what it truly means to be an adult (at least, that’s what I inferred). I also like how Asuka understands her relationship with her mother. She hates her but also sees that she’s provided for her, which is enough for Asuka to have some respect for her. It’s certainly better than ignoring the flaws in one’s family. 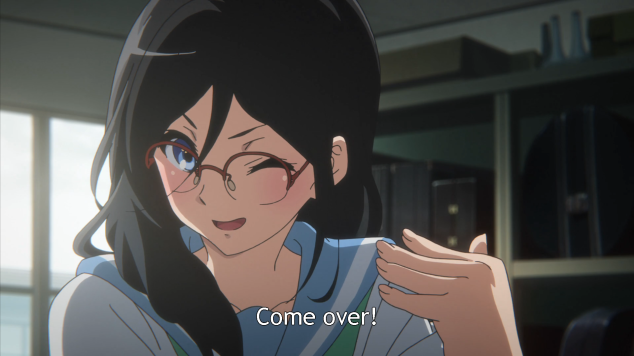 And really, that’s just another part of Asuka’s character. She’s usually so keen on seeing things for what they truly are, but after a while, arrogance keeps her from being able to take a good look at herself. That’s where Kumiko comes in. Kumiko is the shoulder we get ride on as she snoops and stumbles upon every conflict within the band. She’s more of a witness than an active participant in the first half of the season, and while people find themselves more open to talk to her, she doesn’t act the same way back. In the first season, Reina’s determination and attitude inspires her to become a less “go with the flow” kind of gal. In this season, she finds out she’s just as wishy-washy as she’s ever been. Even when she’s alone with Reina, she’s only able to give off a basic idea of what’s on her mind. It’s only when Asuka challenges her that Kumiko finally learns to be open and honest with herself.

Reina has some great moments too, dispersed throughout the two main bulks of the season’s narrative. Mostly, her spotlights are to show how close she’s getting to either Kumiko or Taki-sensei. Even so, her presence is done right, which is more than I can say for most of the show’s other “supporting characters”. Midori and Hazuki feel like nothing but comic relief in this season, which is disappointing since Hazuki had such a great OVA. Now it seems they’re just around to remind us of their existence, and to have a quick gag every now and then. Shuichi’s in a similar situation, but it’s not for the sake of comedy. Honestly, I don’t know what he’s there for. Nothing about his relationship with Kumiko is romantic, no matter what seemingly romantic situation they’re thrown into. Kumiko doesn’t even blush at the gift he gives her, and nothing about her thoughts or focus indicate that she has any real interest in him. The only side characters that really come into prominence this season are Yuuko and Natsuki, and that’s for reasons I don’t really want to spoil. I’m beginning to like Yuuko though, she’s much less annoying than when she was first introduced last season.

Characters and their plots aside, season two is still about as good as the first in a lot of ways. The animation is fantastic as always, with such an excellent control over body language and subtle physical comedy. Instead of relying on cheap still frames of chibi faces with exaggerated emotion for comedic effect, KyoAni actually goes through the trouble of animating their character’s reactions in excruciating detail. From the direction their eyes race to the way their skirts flap as they turn, it’s totally unnecessary, but a joy to behold.

Another aspect carried over from the first season is the totally superfluous sound design. It’s honestly absurd if you think about it, but KyoAni really went out of their way to make their settings feel realistic through sound. They actually gave detail to the reverberation, and you can tell through the way voice and music travel in different scenes. Conversations in a stairwell or an empty room echo, and that’s totally fucking unnecessary, but really cool nonetheless.

In terms of moments, I think this season did reach new heights for the series. On the other side however, I believe the show hit some new low points as well. Specifically, I can’t help but feel the show didn’t do a great job of maintaining the relevance of its characters. Or rather, it tried to keep characters relevant when it didn’t need to, and only made them seem like they’re worth a couple of cheap gags rather than feel like meaningful friends and integral roles in the plot of the season. If they didn’t need to be there, they might as well have taken a back seat. And then there’s the new instructors that did almost nothing, which left me questioning why they even bothered to introduce them in the first place. Kumiko, Asuka, Reina, Natsuki, Yuuko, Mizore, Mamiko, and Taki-sensei; These are the only characters that hold any sort of significance in the season’s narrative, and even Mizore kinda just becomes another one of those side characters after her arc is over.

If it weren’t for this sad underuse of characters, Sound! Euphonium 2 could easily be considered as good (if not better) as season one. Everything else is still there, be it the development of core characters, touchingly real themes, ridiculously impressive animation and sound design, and a beautiful OST. They even took some opportunities for creative shots (like the scene where they found Mizore behind a desk). It’s too bad the show had problems being stuck between having characters stay relevant and keeping them out of the way, because I would’ve otherwise considered it a fantastic season that ends on a sharp, but wonderful note.