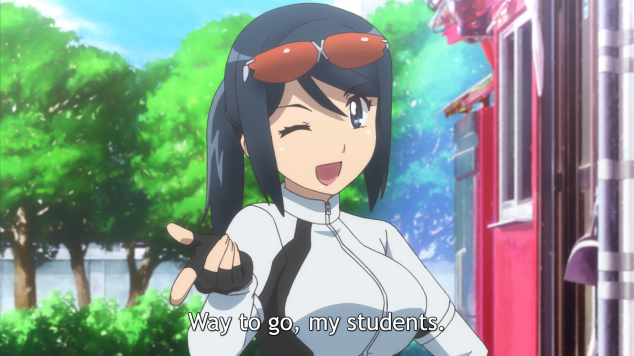 This week on Girls Gone Bike we’ve gotten through the initial introduction and are now being gradually introduced to the full cast. I like the speed at which this is going so far, and I’m happy the show still hasn’t given up its delightful slice of life aspects. The girls, primarily Hiromi, manage to get into silly predicaments that resolve fairly peacefully. Four of the five girls in the bike club have already been discovered, and while their motivations aren’t particularly strong, the way they’re drawn to cycling isn’t what needs to be compelling. The show builds itself up to be more about discovering the joy of cycling rather than jumping in to the professional level. It’s a sports anime that takes a much more laid back path, not relying on more commonplace “high stakes, high drama” approaches. And as a novice, I really like that a lot.

In this episode, there are multiple plot lines that converge to the same point. Hiromi, Tomoe, and Shiki sensei end up exploring the town on their bikes.  Through a montage we’re shown the girls rolling through the pretty streets and forested trails of the area, indulging in gorgeous scenery and eventually making it to a shrine where they can take a break. This montage is yet another perfect example of the show wanting to bring attention to its splendid background art, which consistently look like lovely oil paintings. Anyway, Shiki-sensei falls asleep at the shrine and so Hiromi decides to try out Tomoe’s new bicycle. Unlike her own, this bike has a variety of speed adjustments, and so it was appealing for Hiromi to try it out.

With Tomoe’s permission, she goes out for a test ride, but before long Hiromi realizes she’s lost. It’s at this point that I’d like to bring attention to how the humor in Girls Gone Bike seems to be executed. There are a lot of anime that tend to have their characters overreact to comedic mishaps and situations. I’m glad this show managed to keep itself from falling down that slippery slope, handling Hiromi’s blunder subtly, without over dramatizing the consequences of her actions or going too far in emphasizing her personality (clumsy, airheaded, carefree). Hiromi merely notices that she’s lost her way and takes practical steps like asking someone for directions to help her find the way back.

On to the other lines of story in this episode, we meet the rich, bird watching girl and the currently ambiguous cyclist girl, both of which happen to meet at a bakery/café place(?). The lady who works there had previously gotten a call from Shiki-sensei, who happens to be her sister, asking her to help with the search for Hiromi. She asks three bicyclist boys to go out and look for her, to which they happily do her the favor out of a sense of admiration and attraction, plus the promise of free treats. When they do eventually find Hiromi, it looks like three strange and semi-crazed men coming at a lone girl, which is a humorously precarious scene given the context we have. Luckily, the scene stops there rather than become a drawn out chase montage or a hasty, overdone “clear the air” conversation. I like where they stopped, because once Hiromi meets the others at the café, the narrative jump is a very clear and inconsequential one. It needed no explanation, so they didn’t give it one. 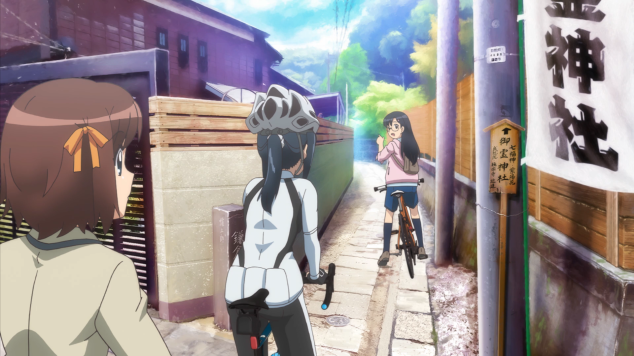 All the girls meet and introduce themselves to each other, and Shiki-sensei comes up with the idea to all go on a journey to Enoshima. That’s where the episode ends, but there are some things that I can’t forget to mention before I end this particular post. Natsumi, the ambiguous cyclist girl, seems to hint that her parents have some sort of history in cycling, so perhaps she’s the daughter of a professional. The rich, bird watching girl, Fuyune, has a butler and apparently a lot of time to go capture the sights. So far, the characters this show has to offer are at the very least pleasant, and while I don’t expect anything deeply thought-provoking to come from their identities, I hope they can bring fun, unique dynamics to the table. One more thing I like is that the show’s setting is a real place. I just find it very neat and business savvy to promote tourism in anime. Of course, not if the ulterior motive comes at the cost of the narrative, but that doesn’t seem to be a problem here so far. Girls Gone Bike has been fun, pretty, and educational, so I hope it keeps that up and doesn’t turn its back on the foundation it has set right now. That isn’t to say I don’t want characters, relationships, and plot to develop. Rather, I just don’t want it to do a Flip Flappers on me, where it just changes its narrative style and delivery on a whim later on. All we can do is wait and see.