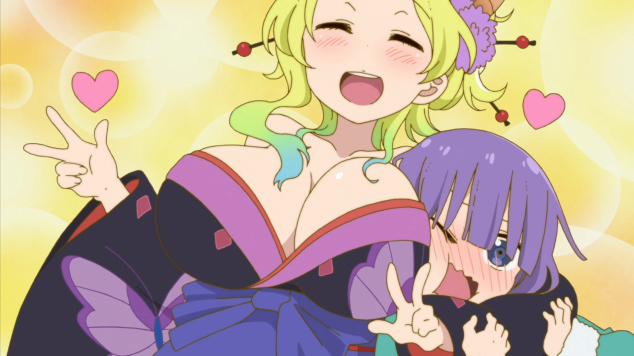 Last week I wrote about embarrassment comedy and how I think a lot of it has become annoyingly stagnant. In that piece, I mentioned Miss Kobayashi’s Dragon Maid, with the point being that even great shows can fall victim to the tired, old gag. I also noted, however, that it was one gripe in an otherwise fantastic anime. Most importantly, I claimed the show to have “delightfully shameless” characters, and so I think now is as good a time as any to elaborate on what I meant by that.

Miss Kobayashi’s Dragon Maid is a stupendously funny show that goes off in a variety of directions with its comedy, directions that play off each other in smart and subtle ways. It’s starts with the fish-out-of-water scenario of dragons in the human world, playing with the perspective of the dragons to give comical and sometimes even insightful observations of humanity. Comedy stems from these misconceptions as well as some of the innocent yet sharp criticisms of society that this cast of outsiders so graciously provides. 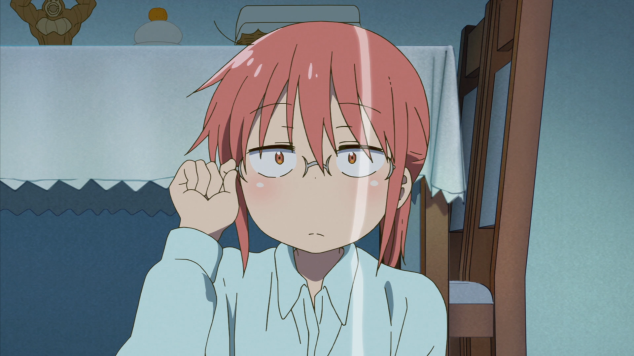 Their innocence is part of their charm, and it allows for moments of whimsy and curiosity, touching upon a humor in endearment. An example of this would be Kanna and Tohru bending spoons. They watched a magician on television bend a spoon like it was nothing, and in turn tried to do it themselves, unaware that it was just a mere trick. It’s a cute joke, akin to watching a cat chase a laser pointer.

Destruction is another area of humor within the show, one that pairs nicely with innocence in the sense that it adds levity to something that otherwise should be at contrast with the feelings these two things provoke. When we watch a pretty maid dragon go from gently strolling through a peaceful shopping district, to smashing a robber through pavement with earth shattering force, there’s humor to be had in that sudden escalation.

Of course, the jokes hit even harder thanks to the fantastic spectacle that is the animation. It’s a silly comedy, yet it has these intense bursts of action that could rival some of the best fantasy thrillers out there. Of course, during it’s less action-packed moments (which is a majority of the time), Miss Kobayashi’s Dragon Maid still manages to show off just how much care and effort is put into it. Characters are given an incredible amount of expression and movement that make scenes more dynamic, and individual frames more enticing. The amount of expression given to certain characters, namely Tohru, also emphasizes a charming lack of expression from characters like Kanna.

And there’s plenty more diversity in comedy to be had, stemming from things like the pairings of the characters…but I could go on all day just talking about everything funny in Miss Kobayashi’s Dragon Maid if I don’t stop myself. Now that I’ve given you an idea of what the comedy of this show entails, it’s time to explain how shamelessness makes it all flow together smoothly. You see, the steady stream of humor in this show is only made possible by the carefree attitude of its characters. Their ability to freely do whatever they please opens up all kinds of possibilities for adventures and scenarios.

This is important because while Dragon Maid does offer a variety of comedy, almost all of it falls under the category of “situational”. In a quick flowing sitcom such as this, feelings of embarrassment and nervous contemplation would only slow things down. Because the characters have little to no shame, interactions flow better, faster. When we don’t have to hear the inner monologue of a protagonist overthinking a situation, there’s more room for jokes. Not that I have anything against hyper contemplative characters, I could listen to the thoughts of Hikigaya Hachiman or Araragi Koyomi all day long and never get bored.

But that’s just not the style of the Dragon Maid, nor does it fit the kind of screw ball comedy sub-genre that the show finds itself in. Miss Kobayashi’s Dragon Maid is all about not sweating the small stuff and having fun. The characters have the magic abilities to clean up all their messes, no matter how catastrophic, so even the craziest situations can be remedied quickly. The show isn’t about breaking out of one’s shell or dealing with the consequences of one’s actions. From what I can tell, it’s more about finding one’s place and enjoying one’s time here while still possible. Of course, they’re all fine themes to work with, but I do think some lend themselves better to the type of comedy in this particular show.

The shamelessness of the characters is one of my favorite things about Dragon Maid, especially when it comes to Kobayashi, our main protagonist. She seems very content with who she is as a person, and while she is in no way perfect, she doesn’t let herself get down over such trivial matters. Maybe it’s because I’ve practically been trained to expect protagonists to have some sort of insecurity, that I find Kobayashi to be so refreshing.

Not every character in the show is as refreshing as Kobayashi, however. There is one character that I find to be legitimately pointless, but I’ll save that for later as it would be getting a little too far off from what this post is for. Lucoa is, of course, the queen of shamelessness, so it would be wrong of me not to give her a shout out before ending this post.

Shame in storytelling can be utilized in interesting ways, though in lighthearted comedies, I think I prefer a total lack of it. Embarrassment becomes an unfunny waste of time when used in a contrived manner and can detract from more important things, like explosive dragon girl brawls and adorable field day events at school. While it might not be realistic, I just like it when characters have nothing to hide.

But what do you think? And more importantly, who’s your favorite character in Miss Kobayashi’s Dragon Maid and why? I hope to see you in the comments below, but if not, let me at least thank you for reading.

One thought on “Kobayashi and the Joy of Shamelessness”