I’ve already gone in-depth about how I believe the characters of Eromanga Sensei do not earn their titles of “published authors”, mainly because barely a sliver of their writing is shown to the audience for which they can use to judge for themselves. I’m not going to know you’re a “good” writer by simply someone telling me so, and that sentiment has been the heaviest stress on my suspension of disbelief from start to finish of this anime. That all being said, Izumi and the others not truly displaying their writerly skills while expecting the audience to accept their status as “published authors” isn’t the only thing Eromanga Sensei failed to earn.

Funny enough, the most undeserved thing in this romantic comedy series is the love between the characters. Every infatuation is utterly unearned, with maybe one exception by episode 11. Elf falls for him out of sheer proximity because through the power of miraculous coincidences, these two competing authors end up living next door to each other. Of course, the show somewhat insinuates that the attraction starts around when she reads and is impressed by Izumi’s heartfelt draft about his little sister, plus there’s the part where he compliments her cooking. By the time she confesses, she’s spurred by overhearing him say nice things about her while he bathed with her brother. That being said, he goes on and on about how he’s in love with someone else throughout the entirety of the series, which one might think would be a deterrent.

Muramasa fell in love with Izumi because she happened to read his writing (that again, the audience hasn’t been able to read) a while ago, and it became her inspiration for becoming a writer herself. She surpassed him fairly quickly in terms of sales and critical acclaim, yet still she looks up to him as some sort of master of the art. He also gave her an encouraging talk once, and that’s about as deep as their relationship goes. As for the other girls, they don’t even deserve their own individual sentences explaining why they like Izumi. Their reason for even existing in the story so far is unbeknownst to me, so I’m just going to move right on to the main couple.

Sagiri loves Izumi, and Izumi loves Sagiri. Why? Who the fuck knows! At least until episode 11, no one does, as a pointless mystery is drawn out throughout the season, only to partially revealed the answer to a question that wasn’t even clearly asked. Sagiri’s a shut-in and we don’t know why, and it seems to be a much more important part of her character than the show leads us to believe for a good portion of it. It comes off as more of a playful quirk than a painful condition, as Izumi doesn’t even hint to her that it might be a good thing to leave her room once in a while. Does she have trauma? Is there something in the outside world that she fears?

It’s strange because it’s not presented as a problem, and most of the characters don’t care one way or the other about it. Sagiri’s shut-in behavior doesn’t seem like a big deal until it’s convenient, as at the end of the season she finally leaves her room to welcome Izumi home after a successful release of their novel. This is undoubtedly meant to be seen as a grand gesture, yet almost no one pushed her to do this, not even herself, during the entire season. But when Izumi mentions that he’d love to go to the beach with her one day, that’s apparently enough for her to walk outside her room. Just a poorly setup attempt at a grand emotional climax, it would’ve been much more meaningful to me if the show ever actually spent time making me feel like what she was experiencing was indeed a struggle, but I digress.

Back to the romantics of it all, Sagiri loves Izumi based on some bullshit that’s ten times more ludicrously coincidental than Muramasa and Elf’s infatuations combined. Of course, this would be major spoilers, so I won’t get into details, but know that it’s fucking ridiculous, and that all you need to do is watch episode 11 to see what I mean. And then, that only explains her love for him. We still don’t know why she’s a shut in, or why Izumi loves her so much, and what’s really frustrating is that we could easily know what Izumi, if we could just read his fucking book! 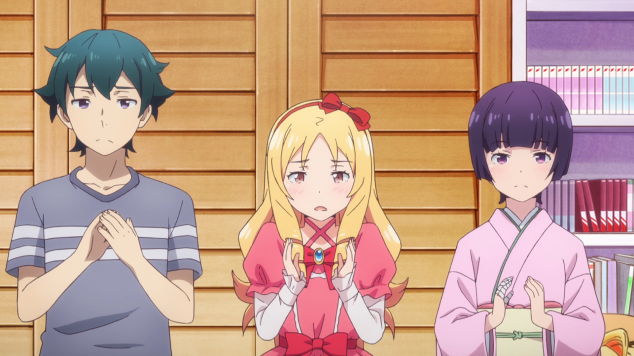 Anyway, that was just something that’s been on my mind, something I wanted to get out so that I don’t have to think about Eromanga Sensei ever again…or at least until season 2. Elf Yamada is best girl, thanks for reading.

One thought on “One More Thing Eromanga Sensei Doesn’t Earn”