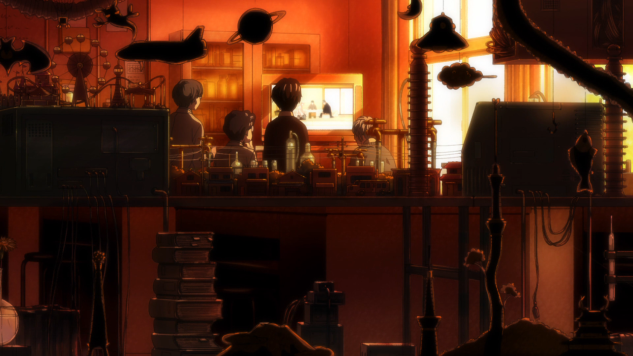 Ah, yes…it feels good to be back. March Comes in Like a Lion season 2 is finally here, and I could not be more delighted about it. While I’m always excited about everything SHAFT studio produces, this one show in particular is something I’ve been eagerly waiting for ever since the end of its previous season, and the reason for that is probably because it’s a combination of two of my favorite things: March Comes in Like a Lion is a special creation that seems to come from SHAFT’s avantgarde style being toned down and fitted to slice of life.

The comedy and the darkness of the show are strong in contrast, and end up being emphasized by SHAFT’s peculiar style of editing, reminiscent of French New Wave among anything else. Through unconventional editing techniques, March Comes in Like a Lion gives more to the distinctive feeling each scene and each character imposes. One of many, MANY examples of this is in this first episode of season two, where Rei unwittingly shows off his professional side to his fellow “Science Shogi Club”-mates. When teaching them a harsh lesson about failure, Rei comes off as overly robotic and uncompassionate. This moment is comedically composed with a non-diegetic insert of a close-up of Rei with a background of nothing but a flashing pattern of square lights. As he speaks of how failure only becomes more frustrating the stronger you become, the scene cuts to even closer shots of his face, with the similar sleek, repetitive patterns behind him—simply put, he’s shown to be as intimidating and computerized as the other characters in the scene see him to be.

Anyway, this is an important moment because it leads to the other characters asking this:

“Do you have fun when you play shogi?” A simple question, yet also a decisive commentary on professional play; Rei finds himself broken by these words, as it may have never occurred to him that he hasn’t been enjoying himself for at least some part of his career. He comedically falls back, and not much more light is shined on this issue, though surely, the theme will resurface later on.

After that they watch a professional shogi match on TV, and the novice scientists (as well as us, the audience), learn about shogi players care for their own brains as they consume handfuls of glucose (or sugar) to fuel themselves, and this leads the club to making their own little ramune candies using science. It’s a fun time, but ultimately, I don’t think that’s what sugar does. I looked it up and there seems to be an overwhelming majority of people in the health-science community that believe sugar is pretty much “not good” for your body. Oh well.

In the end, the episode is a nice welcome back with a few sprinkled hints of themes to be elaborated on and plot points to come. Before the credits roll, Rei comes back to his (symbolic) home, with ramune candy share! We (both Rei and us, the audience) are met with the glowing warmth that is the Kawamoto family. Their home is one of the very few place Rei can be caught smiling, though he finds his world of happiness opening up more as each day passes. As seen in this episode particularly, when Rei’s having fun and can actually acknowledge that he is indeed enjoying himself with his clubmates. Rei’s moving farther away from that darkness that bound him before, and it’ll be interesting to see how far he’ll be able to push himself forward through the rest of this season.