Sorry I’m so late on this one. A couple weekends ago, I was so taken away by the brilliance that is Koe no Katachi, that I guess I just didn’t have it in me to write about anything else. In all seriousness though, I’ll try to get these episode reviews caught up soon. Until then, let’s talk about what I’ve started noticing in March Comes in Like a Lion that I didn’t give much attention to, or just plain couldn’t comprehend in season 1.

Lighting is very important indicator of mood within a scene. In March Comes in Like a Lion, the mood of every moment is of the utmost significance, and so it has been taken upon SHAFT to be very peculiar in regard to the lighting of each shot. As a grand theme of the show deals with the stark contrast between Rei’s life in solitude vs his life surrounded by others, lighting is key in providing what are sometimes overly clear depictions of his mental state. When he’s with his “family” (the girls, not his past foster home), the scene is met with plenty of light, and plenty of warmth in color, especially when they’re in the physical home. When’s he’s alone, or just surrounded by people that that don’t give him any sense of comfort, the setting is dark and full of cold colors, like blue. His apartment room is the most obvious showcase of this.

In this episode, however, we’re met with a different setting, following characters other than Rei. Gotou, a.k.a. that main antagonist sorta looking guy, is apparently more than just an abusive asshole/shogi warmonger. We another glimpse into his past altercation with Rei, as well as a much-appreciated view of his current daily life. I say appreciated, because up until now he’s been nothing but 1-dimensional, a wall of pretty much evil and ill intention that Rei will maybe overcome one day?

And as a short aside, that’s something I really like about this series. “Rei will maybe overcome one day?”—it’s a question, obviously, and it implies that victory is not a certainty. I haven’t seen anything up to this point that would suggest such a conclusion, at least. This story might not be about Rei becoming the best in the world. If anything, the theme of dealing with failure seems much more prevalent currently. Whatever the end will be, however, I do find myself enjoying the anti-shounen nature of the show, where I’m not necessarily egged on to cheer for anyone, let alone the main character. 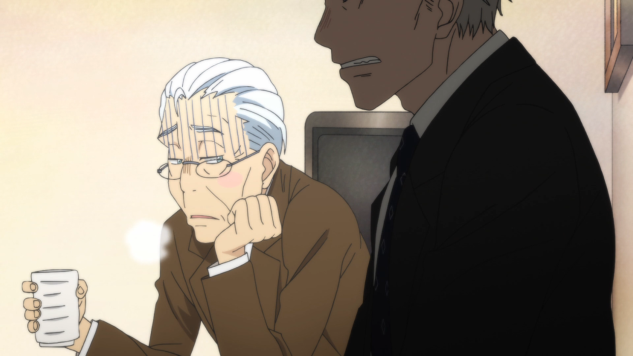 Anyway, back to Gotou, much like Rei, he is typically shrouded in darkness and seen as a literally, physically shady guy. He is drawn to have his figure be shaded in quite a bit, likely to emphasize the darkness within himself and give an extra aura to his generally unwelcoming personality. Also like Rei, Gotou has an escape: Kyouko. When he’s with her, colors become a bit warmer, lights begin to shimmer, and he becomes a nicer person to her than he would to anyone else on the planet. Well, anyone besides his newly revealed comatose wife, the plot point that can finally start to explain why this dude is such a dick, and what perhaps caused him to spiral into the menacing ball of rage and resentment we see now. Unless of course she was still “alive” when he started seeing Kyouko, which would mean a completely different story. There’s still a lot here that needs to be filled in before we can comprehend the big picture, but I’m glad pieces of the mystery are still gradually being pieced in.

The other half of the episode was focused on the theme of frustration, applied to the highest levels of play as Rei and the others in the room (I won’t bother naming them due to lack of memorability—probably on my part) watch a professional match on television, one of which Souya, the child prodigy and current zenith of the shogi world, is a participant. He blows away the entire crowd watching as the opponent surrenders far sooner than almost every level of shogi player can comprehend. If a wall wasn’t clearly established from last season, it is undoubtedly erected now (though I think it was, but this moment had a nice impact to it). His opponent stays calm in defeat, but later destroys a wall in his hotel room to let out his true and immense frustration.

One more aside, I actually learned how to play shogi after watching this show’s first season, and I must say it does make the battles more interesting watch. They’re skipped through fast enough so that non-players don’t have to sit through something they could not possibly comprehend. Now, I’m only a novice, but knowing the rules and movement of the game does seem to leave me feeling a little more engaged to the “action” on screen.

I really need to catch up on this show, as well as give some thoughts about other enjoyable shows this season. Hopefully I’ll have time to do that and write more blog posts, what with the holidays coming up, and then dreaded finals (I’m a college student, btw). Until then, thanks for reading!