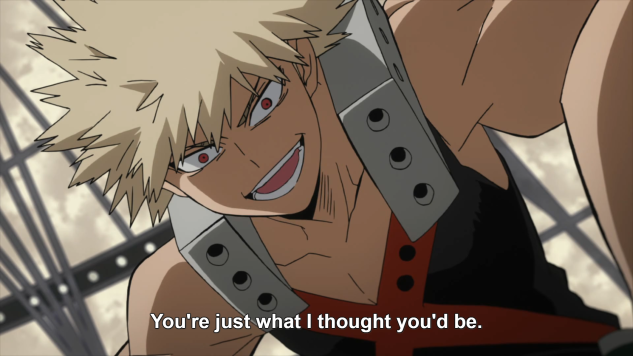 At risk of seeming like I’ve just been fluctuating between positivity and negativity these past few feature week posts, here’s my newest “hot take” on a show that a lot of people seem to like: My Hero Academia is frustratingly pedestrian when it comes to the way it’s paced. It’s honestly been quite a surprise to me as to why I even like it so much, despite it doing most everything that I’ve come to hate about the shounen genre.

Number one: The show verbally explains everything. Whether it’s Bakugo elaborating on how he knew where to target the mist guy during the villain invasion in the first season, or the tremendous amount of talking in the Hero killer fight, My Hero Academia can’t help but constantly slow down to satiate its core demographic of children, whose miniscule brains couldn’t possibly comprehend the gravity or mechanics of a situation by the look of the characters and their actions alone. Yes, it’s important to know that his quirk reacts differently to different blood types, but that can be explained later! An enemy isn’t going to let you work out a strategy in the heat of battle, especially when that enemy is the swift and voracious Stain!

Number two: The obnoxious amount of cliffhangers. While almost all television series are designed to make viewers want to return week after week, shounens are the worst when it comes to abusing their audience’s natural desire to complete a story they’ve started. Every damn episode needs to cut you off in the middle of some sort of plot point, and consider it a treat if an important fight actually concludes itself within a single timeslot.

Both of these things are super annoying…but honestly, I could get past them. There’s more egregious things in the world of anime than excess clarification and the feeling of always wanting to come back for more. When it comes right down to it, the thing that really bothers me about this series is this unsettling feeling of perpetuity—of shounen stories that lose sight of where they wanted to go, and take hundreds of episodes before they get back to that end goal.

My Hero Academia is the story about Deku becoming the greatest hero. Deku LITERALLY says, “this is the story of how I became the greatest hero”. The expectation is planted with this seed; This will be a tale of becoming who you want to be. It’s a common theme, but a nice one at that, and is introduced with such gut-wrenching sincerity that I couldn’t help but be intrigued. Fast-forward to this last season, and it already feels like we’ve forgotten about that.

Deku is the main protagonist, and his story is obviously supposed to be the one that matters most. We follow him first through his fight against a crushing reality, then we continue watching as he finally grasps that glimmer of hope he’s been keeping alive for all these years, and after a training montage we get to see Deku struggle again, this time through the rigors of hero academy! After that, the seams of Deku’s emotionally gripping journey begin to slowly unravel as the classmates start to share the spotlight.

I get that this anime has a lot of cool characters that it wants to show off, but straying too far from the thing that ties story together just isn’t a wise move. Yeah, a side story about Froppy’s internship adventures would be cool for an OVA, but does it really have a place in the main storyline? No! The answer is no. I’m sorry Froppy, you’re real cute, and I’ve seen you do some pretty amazing things with that tongue in some fan arts…but you’re a side character. That means you belong on the side. Unless you become incredibly close with Midoriya, or do something that has a profound effect on him and helps him grow as a character, there’s really no reason why you should be taking up so much screen time in what should just be the central narrative.

And I hate being the one to say this about Froppy, too, but she’s the easiest example, what with having an entire episode to herself that had nothing to do with anything. In an effort to not leave her alone, I will say that Ida and Momo also get a lot of screen time they don’t deserve. Their character arcs are actually both incredibly banal. Momo felt inadequate ever since she woefully underperformed in the tournament. When comparing herself to Todoroki, she realizes she completely lacks decision-making skills when caught in the heat of the moment. Then, through one partnered exam with Todoroki, she overcomes the self-doubt that was holding her back. End of that trivial setback.

Onto Ida, he just goes on a generic of revenge quest. We see all his hackneyed reactions in anger and resentment, and watch him inevitably fall due to his own mistakes. If only this part was glossed over, we could’ve seen more of Deku’s perspective. He could’ve used this as a less cliché learning moment, in failing to recognize the emotional turmoil of a friend and acting before it’s too late. Instead, Ida almost dies, but doesn’t, they capture the Hero Killer, and everything takes at least an episode longer than it should’ve, thanks to all of Ida’s flashbacks.

All these examples barely teach Midoriya anything, nor help him grow very much as a character. (And I’m not talking about the Hero Killer fight in general, just the revenge part. The Hero Killer fight is fucking awesome.) And because Midoriya is already smart enough to know that revenge is bad and acting in one’s own self-interest isn’t what being a hero is about, he doesn’t learn anything from Ida’s stupid mistake. Ida’s stupid mistake only exists to move the plot to this point, and so should’ve been portrayed as such—simple emotions creating simple actions. No need for so many monologues and melodramatic flashbacks.

My Hero Academia just spends too much time on this kind of fluff, exploiting characters and emotions to merely pad out the season. I just really wish we could stick with the main cast and be mostly tied to Deku, because Deku’s the reason we’re all fucking watching in the first place! Those first three episodes got everyone hooked because they had a strong vision behind it, and established a destination we all want to see reached. I want to see Midoriya become the world’s greatest hero, and while I like the other characters too, if they don’t have any significant effect on the narrative that is Midoriya’s life, then they shouldn’t have such prominent places in this fucking story.

Oof, does that feel nice to get off my chest. I’ll probably keep watching for now, and I’m completely caught up on the manga. Maybe if I pray hard enough, this won’t end up being another Naruto. Only time will tell, I guess. Thanks for reading.