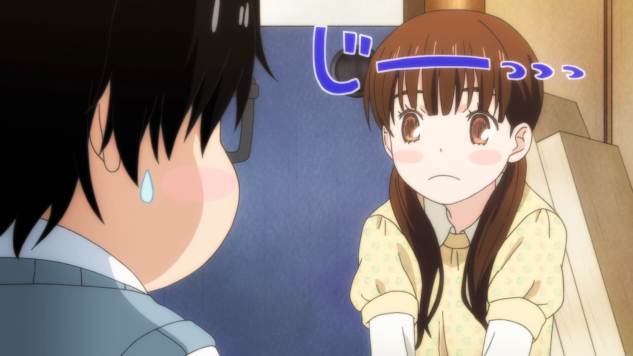 There has been a lot of themes and issues addressed in March Comes in Like a Lion, from these past few episodes alone…and I’m not certain how I feel about it, to be honest. It’s been a bit of a hard turn, really, as we delve into the realm of bullying after an entire season of merely shogi, making friends, and hinting at Rei’s troubled familial past. To turn to the problems of schoolyard hierarchy and mentality, after all that season one was about, has me worried this is more of a side story rather than a pivotal point in Rei’s growth.

Not that I dislike it, mind you, but it could be a sign of fluff, or worse, a lack of direction—an end goal for Rei. And I guess I shouldn’t have said worse, I’m certainly not one to dictate how to tell a story, but, it’s hard to see how this experience will lead Rei to resolve the Kyouko conflict. To get to that point would be nice, as leaving a narrative loose end such as that probably wouldn’t bear much meaning behind it. It’s gripping to follow Hina and her tribulations, though it’s proving to also be a bit disconnected from the main protagonist. It’s not hard to understand what Hina is going through. As pointed out by the show, it’s a despicably common occurrence at school: To be mistreated, and to place responsibility on the mistreated, because it’s their fault the established order is shaking. Not only that, she’s a child, and children aren’t known for dealing with convoluted situations and complex emotions. It’s a pretty raw form, being at Hina’s age, and is shown simply by her first instinct being to act out in violence. Not to take away from the emotional impact, I certainly felt the hefty punch of Hina’s response to the sad predicament she finds herself in…but this story is about Rei, right?

How he’s affected by this is ultimately the most important thing to take away. And for the most part, he does display that he’s been unequivocally moved by Hina’s noble actions. It shows in his new-found passion for shogi. He says it himself: “For the first time, I feel the desire for something”. Rei wants to help Hina, and he thinks winning money in shogi is the best way to do it. Rei also has an amazing chat with Akari as she thinks about how to handle the confrontation with the school. Some brilliant imagery comes to her mind, illustrating the merciless demons within her family that she could unleash on the miserable excuse of a teacher that turned a blind eye to Hina. Monster Grandpa was a particularly brilliant piece of animation to show off. 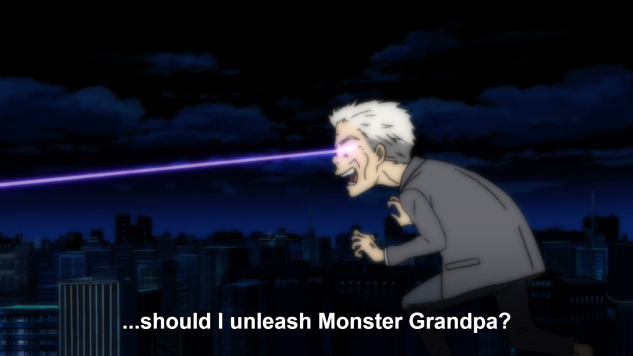 Meanwhile, Rei feels more of what it’s like to care deeply for someone else: the cliché theme of anger manifestation in the wake of a loved one’s suffering. It hurts more than when it’s happening to yourself, is the general interpretation. And I don’t mean “cliché” in a derogatory sense, just merely stating that’s it’s clearly not an original thought—used so often one might consider it a universal truth. Anyway, I loved when Rei shouted to Akari that he could also be relied on. perhaps he may have to be.

On to the shogi aspects of episode, I must mention what an interesting scene it was when Rei faced off against the noisy guy. You know, the dude that was tapping and scratching and growling a lot? I can’t be bothered to remember his name, but his actions proved to be memorable enough. There was a lot of great sound design in the end, there, with practically rhythmic timing of incessant noises of an impatient shogi player. And it was funny that the other members of the shogi congregation were mad that Rei hadn’t shut him up sooner (by winning). 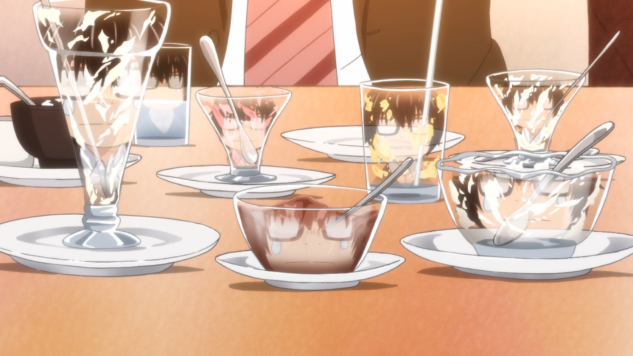 Despite all I said in the beginning, I really enjoyed these episodes. It’s very interesting to follow the developments in Hina’s school drama, especially when the cute baseball boy showed up to help her out! So good! Even if it’s starting to feel like a side story. I just hope the series doesn’t take too many detours. Thanks for reading.