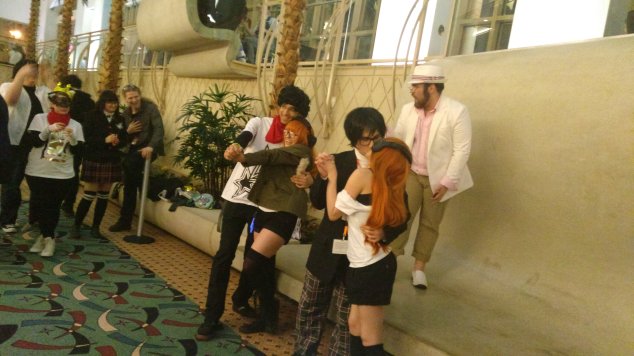 So, it’s been a while since my last post because I was at and preparing for Anime Milwaukee 2018. Though I don’t typically do this, I’ve decided I’m going to dedicate a post to sharing a bit about my real-life experiences, rather than the usual anime analysis or slightly erotic fan fic. [By the way, did you see that Danmachi announced its second season! I couldn’t be less excited!] Last weekend was my second time ever at an anime convention, and I’ve taken away from it far more than I had from my first. It’s been on my mind all week, while I desperately completed a handful of assignments at the last minute because I had neglected them to go to anime raves and play rhythm games instead—and so now, I think, is the time for me to elaborate on my new understanding and appreciation of panel hosting and cosplaying, as well as just the great time I had being among hordes of fellow anime nerds for three days straight.

Firstly, as I’m sure you’re all dying to know, I had my Your Name Would Work Better on TV panel, and it wasn’t a total train wreck! I can’t honestly say it was my greatest performance, but it definitely could’ve been worse. The conditions weren’t great to begin with—my power point was ill-prepared, I was almost late, and I forgot to record it for posterity: all these things were on me. What wasn’t my fault, however, was the lack of people that showed up due to the earliest, first-day timeslot I was given. Add to that the hours(plural)-long registration line that held most of my friends from coming, and you have a recipe for a very small crowd. 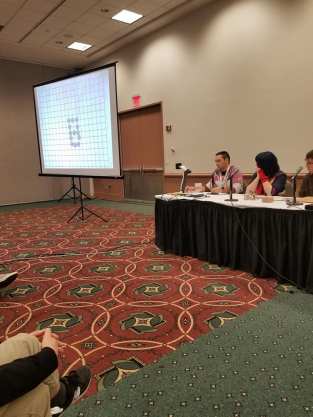 Props to anyone who 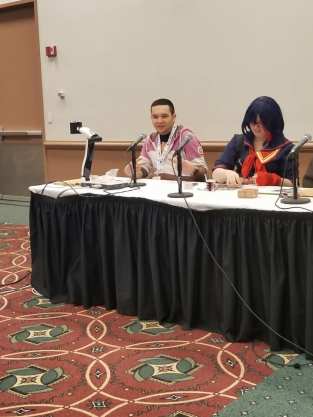 knows what the neopolitan hoodie is from

But at least there was a crowd, which was nice. Of course, I was limited by time because the convention also cut into my panel time by half an hour, leaving me with a one-hour timeslot…one that I wasn’t prepared for because my argument was a bit too long. In the presentation, I had planned to go through some history of director Makoto Shinkai, as well as watch and pick apart the Zen Zen Zense montage in the film. Instead, my presentation ended in a bit of an awkward stumble as I raced to get to my conclusion before the upcoming One Piece panel would start.

Still, I learned a lot of useful information from this adventure. For one thing, my argument needs refining, because, at least to me, it sort of came off as if I was doing nothing but shitting on this movie. And that just kinda happens when you nitpick at plot holes, but it was not my intent to imply that this is a bad film. Quite frankly, I think it’s a great film despite its massive flaws, but I think the way I presented my argument clearly focused more on the bad than the good. Eventually, I’ll reformat and revise the argument so you can see it here on my blog, and hopefully give me feedback. 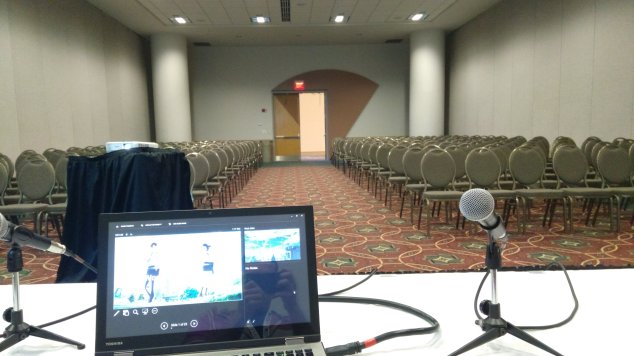 One other important thing I learned about panels is that hosting them by yourself is hard! And just simply sitting next to someone while you’re up in front of a crowd makes it so much easier! You see, I ended up “hosting” 3 panels that weekend, because I volunteered for the Japanese department at my university. They host panels every year at AMKE to hopefully create interest in the local youth, to urge them to apply for college and enter the Japanese program. This year, among other events, they had two traditional Japanese games panels, and they needed people who knew how to play shogi, go, and hanafuda. I can play all three, but because I was the only one that understood go, that made me the defacto “expert”.

And when the panel started, the other “experts” looked to me to introduce the whole thing. I graciously stepped into the leading role, and soon realized that it was far less nerve-racking than my first panel the morning before. I was far less prepared for this one, yet I performed much more naturally. As it turned out, just having someone next to you while speaking publicly is far easier than having no one. It was comforting to know I had someone to pass the mic off to, even if I didn’t need to. Even more than that, I think just having people share the spotlight, rather than the entirety of the room fixating on you alone, is a heavy weight off one’s shoulders. So, I’m glad that went well.

Then there’s all the money I spent. Luckily, volunteering netted me a free badge and hotel room, and it was also my birthday a couple weeks ago—meaning some of my generous family members gave me money—so I didn’t end up bankrupting myself. I learned that food downtown is expensive, and so are maid cafés. But my greatest expenses, of course, were at the artists’ alley. Here’s my haul:

The artists I bought from were very nice, and I definitely should’ve asked for their social media so I could’ve followed and also credited them in this post. Whoops. Also, charms are expensive! But I couldn’t resist this Nanachi charm, so I forked over the cash:

Finally, let’s talk about my first cosplay experience. I went as Dojima from Persona 4, as it was a relatively easy cosplay for me to put together. I already had the gray dress shirt, black pants, shoes, beard, red necktie, watch, and a piece of paper I rolled up to look like a cigarette—so all I needed was the blazer to hold over my shoulder and then I would be set. I was afraid no one would know who I was cosplaying, though, because I could just as easily be taken as a casual business man with his sleeves rolled up after a long day of work. Luckily, those worries quickly went away once I made it to the Persona cosplay meetup.

But before I get into that, I have a confession to make. Up until this point, I had never really understood cosplay, and kinda looked down on it from afar. I’ve never been a costume-person—Halloween has always been my least favorite holiday. Honestly, cosplay seemed to me to be a less valid way of showing one’s “fanhood”, compared to my own ways of showing appreciation. My way of appreciating anime has been delving into the work itself, as well as the people that make it and the things that inspired it. Dressing up as a character I liked just seemed impractical, and not worth much. 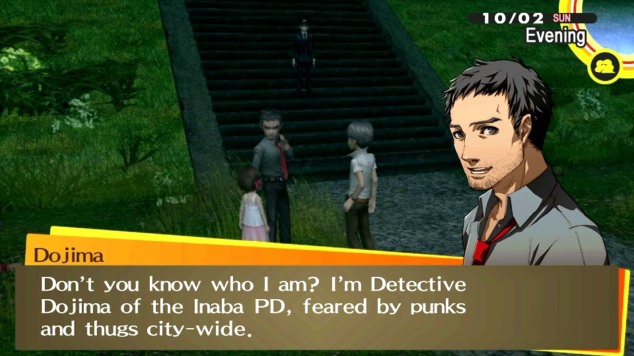 In some sense, I was right. Cosplaying is certainly impractical. But in the end, I was completely wrong about the value in doing it. Cosplaying is absolutely worth it, and measuring your appreciation for something through doing so isn’t even worth thinking about. Art isn’t a competition, and neither is expressing one’s admiration for it. When you get right down to it, cosplaying is about wearing what you love on your sleeve and projecting that to the world around you. It’s like wearing a graphic t-shirt but amplified, and done in an environment where everyone feels more comfortable walking up and asking for a photo, engaging in conversation, cracking inside jokes that only fans of the series will get, and so on.

I finally realized that, once I came to the Persona cosplay meetup. I was surrounded by fans of the series, and while an overwhelming majority of them were young, Persona 5 fans, there were some Persona 4 and 3 cosplayers as well. I was incredibly amused by them the small group of P4 cosplayers, as they seemed slightly jaded about the series being “hijacked” by this new wave of P5 fans. Sure, it was likely that a lot of them hadn’t played the original, but I couldn’t possibly be bothered by their slight negativity. I was having too much fun, and found this crowd to be a hilariously accurate representation of the fanbase: the old-guard SMT/P3&4 elitists and the rebellious, new-wave phantom thieves.

The photoshoot was amazingly nerdy, as we grouped up in a number of ways referential to the series, such as by Arcana, romantic ships, recreating P5’s Valentine’s Day fiasco, and my personal favorite: gathering around Akechi, on our knees worshipping as he lifted up his hoodie to reveal a shirt with delicious pancakes on it. Plus, I got to take pictures with my fellow Persona dad, Sojiro! Too bad Nanako wasn’t there…I really shouldn’t keep leaving her home alone.

Anyway, I’m so glad I cosplayed and went to this, and afterwards made friends with a bunch of them on Instagram. The whole experience left me hyped to do more cosplay in the future, and even reinvigorated me to go play all the Persona games I’ve missed…which is everything except 4 and 5. Yes, I’m one of those filthy new-wave fans!

In the end, I had a fantastic anime con experience, and I figured this would be worth writing out, as it would allow me to segue into asking those of you reading this some questions. What I’d simply like to know is:

I’m still very new to this sub-culture of anime fandom, so I’d love to hear your thoughts! Also, I’ll be back to normal, analytical anime posts soon—and of course, I still have a ton of March Comes In… to catch up on. Until then, thanks for reading!