It’s been years since the last time I wrote about Oshino Meme, one of my favorite characters in all of fiction. Back then I wasn’t as concise about why I admired the character so much, and that was due to the fact that I myself didn’t have much of a grasp on what it was about that him I found so incredible. Sure, he has the chillest attitude and impeccable fashion sense, but that doesn’t really account for why I found myself so deeply fascinated in his persona. Once I started building up my knowledge of philosophy, I started to see Oshino for what he really is: A supreme being of balance and an absurd, realist ideal of how we should direct ourselves in the world.

Starting chronologically within the Monogatari series fiction, let’s begin by looking at Kizumonogatari. In the (annoyingly) three-part film, Oshino shows his strength and his allegiances. The story of Kizumonogatari is a battle between the sides of humans and vampires. Being supposedly human himself, it would make sense for Oshino to work with his species’ best interests in mind. However, that does not turn out to not be the case, as the only side Oshino seems to swear by is the side of balance. He acts as a mediator, arranging the duels between Araragi and the three individual vampire slayers. Before this arrangement is made, Oshino steps in and stops the three highly trained assassins from ambushing Araragi, blocking three killing blows at once within the blink of an eye.

This is a display of Oshino’s hidden strength, something he only uses when necessary, and never for his own gain. Mild *SPOILERS* for the film, it is revealed that Oshino used his skills to even steal the heart of the most dangerous aberration in existence—Kiss-Shot Acerola-Orion Heart-Under-Blade—so to even the playing field for the three vampire hunters. Oshino’s power cannot be understated, and it goes to represent his supreme morality as a character. There’s a saying about what makes a person “good”. It isn’t just that they don’t do bad things. There are plenty of weak people that cannot do bad things because they don’t have the capacity to, but that doesn’t make them good. That just makes them weak. A good person must have the power to do selfish, destructive, evil-minded things—and then choose not to. Oshino Meme clearly demonstrates that power in a seemingly effortless fashion within the first arc of the entire Monogatari series, and his character only becomes deeper as the series continues.

In Hitagi Crab, the first arc of Bakemonogatari, Araragi takes Senjougahara to visit Oshino in the abandoned cram school, in hopes that his expertise in the occult could help her with her weightless conundrum. She walks up and says to him “I was told that you’d save me”, to which Oshino quickly rejects the notion and retorts “All you can do is save yourself on your own”. As she explains her situation, Oshino coldly responds with “I don’t care for the way you’re playing the victim, young miss”. This is actually a very harsh but important lesson to learn about dealing with personal trauma. In psychotherapy, a typical method for dealing with traumatic memories is going back and accessing them, finding out where the victim may have failed. Some consider this to be “blaming the victim”, but actually it is tremendously helpful in reconstructing a person’s view of themselves and the world. It’s important that one faces the terrible realities of their past in order to grow stronger and ensure that they’ll never have to see themselves as a victim ever again. You never want to see yourself as helpless, and moving past that is just a stage in your recovery—and I think that’s the meaning behind Oshino’s ostensibly cold observation.

Back to his first words about people saving themselves however, I think this is yet another piece of sage wisdom from the Hawaiian-shirted genius. While he does recognize that there are multiple solutions to deal with Senjougahara’s trauma like destroying the divine crab (symbolizing the weight of her emotions), this seems to be his little hint at the best outcome—the path of greatest personal growth. “If I go ahead and crush it, then on the surface, the problem will be solved”, Oshino says with his foot pressed firmly on the crab’s shell. Hitagi’s relationship with her mother will never be mended anyway, so burying it deep could be a reasonable solution. “In the end, stuff like this is all about your state of mind…”. How Senjougahara’s going to live with herself is her decision alone, because ultimately, it’s up to you to save yourself.

Finally, let’s look at the end of Nisemonogatari, the conclusion to Tsukihi Phoenix. Oshino is not in this arc, nor any arc after Bakemonogatari, but that doesn’t stop his presence in even the slightest. After meeting Kaiki and then Kagenui, Araragi learns of the three specialists’ relation to each other. They used to be University classmates, and members of the Occult Research club. In their eccentric club, they ended up conversing about profound philosophical questions as if it were mere, everyday small talk. One question Kagenui brings up to thematically tie together the arc about fakes is this: “Given the real thing and an indistinguishable fake, which is worth more?”. Kagenui would answer that the real thing is worth more. Kaiki thought the fake as of greater value, quoting that “in it’s deliberate attempt to be real, it’s more real than the real thing”. This leaves Oshino with the middle answer: that both the real and the fake have equal value. 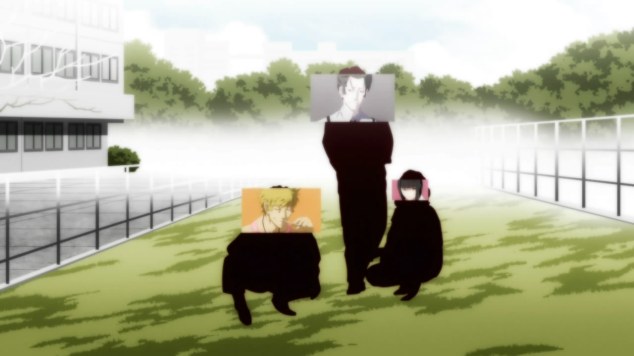 While the meaning behind his rationality isn’t elaborated on, the point that I’m trying to get out of this is that Oshino always finds himself at the center of two extremes. With Kagenui being a divine punisher and Kaiki being a dreadfully brilliant conman, Oshino finds his place as the comfortable balance between the two living embodiments of order and chaos. There are many religions and philosophies that preach a similar outlook on life, but because they came up with the best illustration for it, I’m going to give credit to the Daoists. Daoism is, in a very brief inaccurate explanation, the belief that one should tread the path between order and chaos to achieve inner harmony. The symbol of Yin and Yang is a powerful symbol because it illustrates the light, the dark, and the thin line between them.

That tricky balance is where I believe Oshino Meme treads. Creating balance between human and aberration like he did with Kiss-Shot. Taking no sides and merely creating an even playing field like with Araragi. Helping people without taking away their ability to save themselves like with Senjougahara. Oshino has strength and skills, and knows the appropriate time to use them. He exists as a humble, passive middleman between two peers that let their ideals (or lack thereof) run rampant. His seemingly vast knowledge helps him face reality as openly and honestly as possible, and can’t help but have a positive effect on the world. And because of all that, I considered Oshino Meme to be the man we should all strive to be. Also, because he rocks that pink Hawaiian shirt.

One thought on “Oshino Meme: The Man We All Should Strive to Be”