I love watching anime openings (OP). Call me old fashion, but I almost never skip them to get directly into the story. It’s rare that I ever find one OP that I dislike, so much so that I would skip past it. To me, OPs are very much part of the experience, something that’s feels essential to the way I enjoy anime. Truth be told, I feel a little empty inside whenever an episode starts without it, usually due to picking up where a very important cliff hanger left off.

Openings can be used for so many things, whether just being a cool animated music video or being implemented a little more practically, each complementing the show in their own ways. Openings can set the mood, or purposefully do the opposite. Not only that, they work great for marketing and publicity. Just as one music video might convince you to check out the entire album, one anime OP could sway you to try out the series.

Anime OPs can be absolutely wonderful, and here are some fantastic examples:

Anything from the Monogatari Series

If you couldn’t tell by Araragi being my avatar for every account I’ve ever made, I’m a huge fan of the Monogatari Series. It’s my favorite series of all time, and quite possibly my favorite thing to ever exist in this world. So obviously, I’m incredibly biased. That being said, everything about Monogatari is positively perfect, and their OPs are no exception. SHAFT shows off their mastery of animation and cinematics to delivery stunning visuals and sequences, queued expertly to catchy and sometimes hauntingly beautiful music tracks. What’s even better is that the OPs are crafted to individual characters during their story arcs, leaving much more to be enjoyed than just the standard “one OP per season” approach.

Erased has a truly well-made OP, one that brings back an awesome song to accompany a darker setting. It also does some cool little things that make it that much more admirable, such as placing these three in front of a projector, with the film actually being projected onto their bodies. Just something nifty that was brought to my attention. 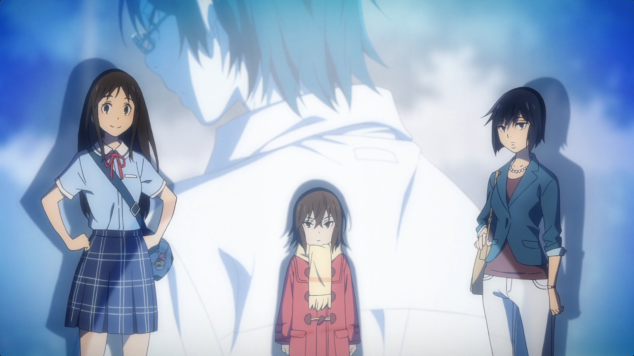 Durarara!! gives a little more than just a catchy tune and exciting visuals. In fact, there’s actually a practical use to the show (and to the audience) that might not be immediately apparent. Well, two practical uses. Firstly, the recap tucked into every OP. A simple implementation, but nonetheless useful to an audience member that doesn’t quite remember exactly what was going on, and for Durarara!!, that’s incredibly important considering the amount of stuff going on in its plot. To further lighten that burden, the Opening gives a still frame with a name tag to every key character in the show. There are a lot of characters to keep track of in this show, and I probably wouldn’t have remembered half their names had it not been for this frequent reminder. These are aspects that could be easily overlooked by binge watchers, but for weekly consumption it’s nice that the show offers a helping hand.

I could probably write an entire series of novels about the anime Opening I like, but when it comes to OPs I dislike…well, none really come to mind. Even the worst shows I’ve watched seem to have semi-redeemable OPs. Or perhaps I’m just too lenient. Still, there are some things I find in OPs that mildly irk me. So here are some examples of anime OPs that did something they shouldn’t have:

The song is catchy, but the visuals were pretty lackluster. What disappointed me the most about this Opening was the re-use of clips from the actual show. While I am not against re-using assets, I felt Dagashi Kashi relied on them entirely too much, leaving little originality and ultimately accomplishing nothing remotely unique or interesting. But then again, the song is catchy.

I actually found both of these OPs to be very entertaining, and I was lucky enough not to notice the problem they had while watching the show. For the sake of spoilers, here is your warning. *SPOILERS ABOUT POTENTIAL SPOILERS, SKIP THIS PARAGRAPH* Well now that that’s out of the way, here’s the problem that both these Openings have. The lyrics spoil the plot/plot twists of the show. Thanks to the auto-tuning and weird pronunciation during the song, it’s hard to notice that the lyrics are actually in English. Similar to how Hollywood trailers often spoil entire movies, these OPs literally read off what happens in the show, and that’s kinda not a good thing.

Well, I’m glad I got to talk about anime OPs this week, because I love them so gosh darn much. But how do you feel about Openings? What are your favorite anime OPs? Are you one of those monsters that skips past them every time? Tell me in the comments or tweet @crispyn64, then come back next week for my post about anime EDs. Thanks for reading, have a wonderful day!

4 thoughts on “The Joy of Anime Openings”