This was a weird episode. Yes, even for its own standards. I won’t knock it for being fanservice-y, but I will laugh at it. A lot. But first, let’s start from the beginning.

One minute and forty-five seconds. That’s how long this week’s intro took. I’m getting really tired of these classroom lectures at the beginning of every show. And I learn almost nothing from them. But I’ve rambled on about these intros before, so all I’ll say is that they suck and I’d be happier if they just cut down the runtime of the show altogether rather than include these wastes of time.

So they introduced the Phantom through a supernatural occurrence at school. Again. But this time’s a little better because they get right into the problem. There’s a monkey hot springs that’s overheating the entire school, and nothing can be done for some reason until the Phantom is gone. I actually like this setup because it leads the entire student body to try and fight it, one at a time with hilarious results. 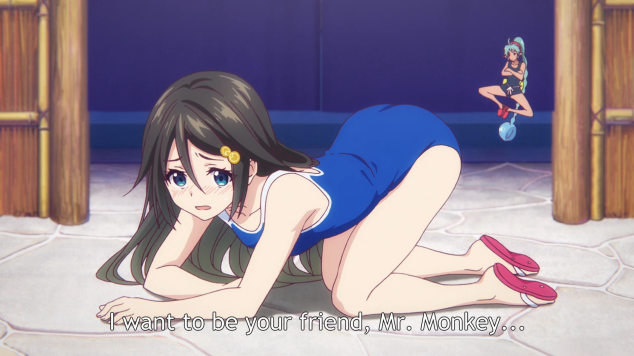 Then our protagonists step up to the challenge, and in the best way that I never thought possible. The plan is to seduce the monkey and make it come out of the water so the Human Encyclopedia can fully see it and capture the image onto his sealing book thing. Of course, due to a number of mishaps, that doesn’t work out, and so he summons a Phantom to save the day. And although he probably could’ve just did that in the first place, I’ll ignore it because I got to see Mai’s ass get painted.

All in all, it was a fun episode, but it severely lacked in any sense of importance or meaning. And perhaps that’s just exactly where Myriad Colors Phantom World wants to go. I’ll be baffled if this show decides to end a note that’s anything but silly and hopeful.

Oh, and I was completely satisfied with this end, in hopes that the Human Encyclopedia actually does marry Mr. Monkey and never returns. All I’m saying is, it better be canon.

+ Not the hot springs episode I was expecting