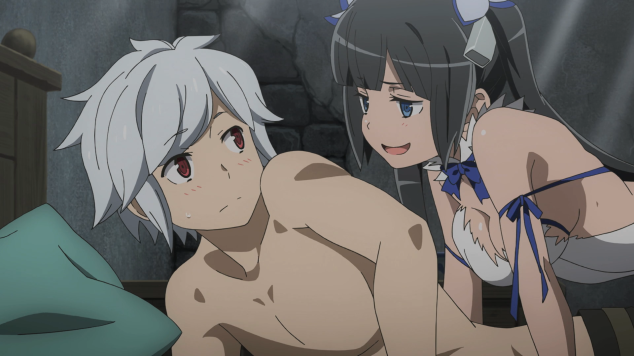 As a creative writer, I sometimes find that poorly written work is more inspirational than something exceptional. Now, I’m not talking about watching straight garbage in hopes of it being some sort of learning experience. It’s more helpful to watch shows that try something and fail. Maybe the dialogue isn’t great or the plot moves along a little slowly, or perhaps the show just went in a direction that you yourself would’ve rather steered clear from. And so what I like to do is take the things you like and cut out the bullshit. What helps even more is when the show in question is overrated. So many people love this thing even though you can clearly see its flaws, and you think to yourself I could write that a thousand times better. And then you do, because who doesn’t love a good story born from spite and envy? Anyway, here are some anime that I think I could improve with my ultimate creative writing prowess. I’ll also limit myself to only shows airing this season, plus I could always return to this topic with other shows sometime in the future.

Re:ZERO –Starting Life in Another World-

To explain how I would improve this show, I would have to first explain what’s wrong with it. Luckily, I already did that last week, but as a quick recap I will say that my number one issue with this show has been the protagonist. He’s a loudmouth, corny moron that I can’t seem to relate to on any level despite us both having the common ground of being Otaku. I like anime and RPGs. He likes anime and RPGs. But he’s also a fucking idiot. Hyperbole aside, I would much rather have a smart protagonist than a dumb one.

Another issue that I haven’t talked about yet is the whole mansion arc. It still hasn’t ended and I can’t see where it’s even trying to go. The setting feels confined and overwhelmingly stale, at least compared to the first arc. I mean, it’s a mansion. There’s nothing fantastical about it. The marketplace had a variety of different characters and a liveliness that the mansion sorely lacks, which would be fine if we didn’t have to spend so much damn time there. There’s two maids whose motivations I don’t understand, a cool and underappreciated lolita, a clown guy, and Emilia. And instead of at least learning about these characters and showing me why I should care about them, Subaru just runs his mouth off and has a bunch of empty, meaningless conversations with them and god I hate Subaru so much.

I did like the first arc a lot. I’d compare it to The Legend of Zelda: Majora’s Mask in the sense that you’re always restarting at the same point in time. If the main character was smarter, you’d be able to do much more with this plot, because then he might actually learn from his mistakes and formulate clever strategies for every new obstacle that knocks him back to the beginning. The pain from every death he suffers would most likely be emotionally taxing and little by little it would further his decent into madness. He could come across an enemy that he just can’t seem to defeat no matter how many times he tries, and it breaks him. At some point he decides that this isn’t a quest to save the princess or the world, but a quest to find a way to kill himself and end the cycle.

I also really liked that moment when they walked into that cabin the first time and got stabbed by some creature in the darkness. That was cool, and unexpected. So I’d keep that, plus I’d make the protagonist a girl because why not?

The problems with this show are many. First and foremost, there are too many characters. It’s hard to care about any of them in particular because they’re all kinda unlikable. The ones the show tries to flesh out are probably worse off, because their backstories are so absurd. Most of their problems deal with some sort of abuse they suffered, and they all probably could have been solved by reaching out to law enforcement. Correct me if I’m wrong, but I’m pretty sure they have that in Japan. So anyway, they came together on a bus to escape their inadequate lives and live off the grid in a mysterious ghost town. What could go wrong?

I like the idea of the seclusion, starting a colony in the woods with a handful of strangers. I don’t like the supernatural crap, and I find that horror stories seem to be more, uhh…more horror-y when they seem real. So what I would do instead is have a serial killer trick a small group of people into starting a new life with her. They find out what she’s up to and lock her up in a cell. Then they just live their lives together and the show becomes a drama. The thing is, there are two guys and three girls, and the two of the girls are gay. The two guys aren’t, and so sexual tensions reach an all-time high because the two guys are fighting over the one girl and it’s kinda cute and rom-com-y until she actually chooses one of them. The loser is now feeling a wide range of emotions: anger, jealousy, betrayal, etcetera, and becomes so desperate for sex that he turns to his last possible option: the serial killer. 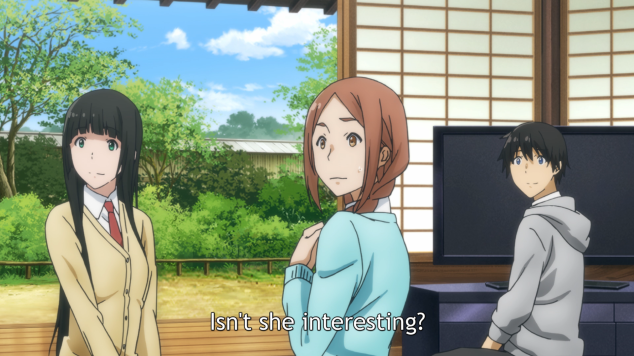 Man I wish this show was actually funny. I mean, comedy is subjective, so if you like this sort of thing then more power to you. But I just don’t find cutesy bullshit very humorous. I don’t follow CuteDogPhotos on Twitter and I don’t frequent adorable cat videos. I don’t hate cute things, but I typically don’t waste my time on such things either, and when I’m watching an anime I’m expecting there to be substance of some kind, other than just cutesy visuals and soft gags. The humor in this show is just plain weak and it doesn’t seem to do much in an attempt to make its audience laugh. Or at least, not me.

The characters of Flying Witch are just as un-relatable as Mayoiga’s, but in a different direction. These characters aren’t traumatized or “damaged”. They’re the exact opposite, being perfect little girls in their perfect little world. They’re too damn nice and it’s boring me. Nothing bad ever happens to them, there’s no real hardship or things to think about with this anime. It’s slice of life right down to its very core, and that would be fine so long as there’s something even remotely entertaining about it. These characters live a very average and uninteresting life (despite having witchcraft at their fingertips). There’s nothing interesting about its location either, it’s just some farmland in the middle of bumfuck nowhere. There’s no love interest, there’s no comedy, there’s no goal, and there’s no entertainment value as far as the eye can see. It’s just a boring show about nothing.

So how would I fix it? Easy. I’d give the characters some actual personality. As to what kind of personality, I’m not sure. It doesn’t have to be drastic, and they could all still be nice people, but they all need something that makes them bounce off each other in more entertaining ways. It’s this kind of a show that I think should take inspiration from something that’s actually good, like Tanaka-kun is Always Listless. That’s a show with all nice characters, and works perfectly. They’re all charming, but they all have something that makes them unique. Unlike Flying Witch, which is basically a show about standing around and being pleasant.

So there you have it folks, some of my utterly fantastic ideas for anime. I know, I know, I’m a genius. But I’d like to know what you think about crappy anime, or just stories in general. Have you been able to turn a story around and what are some of your ideas for a crappy anime that you thought had some nuggets of good ideas? Tell me about it in the comments below and I probably won’t steal your ideas for my own writing…probably.