Let’s start with the intro for a bit before jumping into the main two parts. It was…odd? I know Bungo Stray Dogs is no stranger to getting weird and comedic, but it’s starting to feel like it’s not on purpose any more. Early in the season this show would usually start with a joke that leads to the next part in the plot. The intro scene we saw this week serves only one purpose, which is to confirm that Kyouka is now part of the team. While that’s totally fine and a point that needed to be made, Bungo Stray Dogs had to turn a simple gesture into a poorly delivered dramatical punch to the crouch. The boss shows up and Kyouka asks to join them and brings up that Ryuunosuke said she was only useful for killing so she wanted to prove him wrong but oh no she’s killed 35 people, an arbitrary number that’s supposed to define just how much of a killer she is, but they were using her and it wasn’t her fault and now Atsushi is asking on her behalf as well because his word means something to the boss or whatever and then we get back and forth close-ups on the boss and Kyouka’s face and he says yes and that’s it. Quite an unnecessary mouthful, but there you have it. 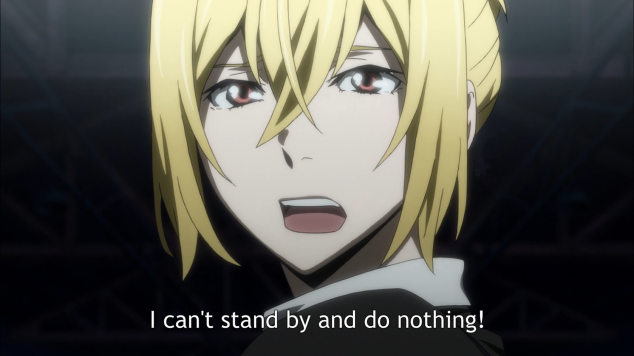 Okay, this could be an interesting plot development. The Mafia is divided or something. I’m actually not entirely sure what was going on here but the blonde evil chick and her lackeys are back, character’s we’ve spent literally one episode with. I don’t know them and I certainly don’t care what happens to them, and actually I was hoping the story was going in a different direction when it was revealed there was unrest in the ranks. Honestly, I was hoping for a reset, for the higher ups we haven’t met yet to just kill the enemies we’ve already come to sort of know. The only one even worth keeping is Ryuunosuke, because he’s has the most screen time, plus some sort of relationship to Dazai. But instead of a clean wipe, we get this: Blonde chick whose name I’m not going to bother looking up fights to save Ryuunosuke but fails in her attempt to run straight at a group of armed men and somehow defeat them, but it’s okay because just as we hear a gunshot and assume she’s dead it turns out to be the other dudes coming to save the day, hip-hip-hooray, and she gets to Ryuunosuke and cries all over him. Where they go from here is completely beyond me, but I hope they drop the melodrama and go right for the action.

So Atsushi and Kenji go out to investigate what’s up with some weird exploding car accident or something. As to why they aren’t using all their resources to take down the mafia that’s been tearing this city apart, who the fuck knows? Let’s focus on this piddling little crime even though it’s the second to last episode of the season. Starting with the character just introduced, even though it’s the second to last episode of the season (I know I said it twice), Kenji is an honest and gullible farm boy with a heart of gold to match his glowing exterior. His power is super strength, but only when he’s hungry. And that’s all you really need to know about him. They eventually find themselves surrounded by a gang who thinks they’re onto them when in reality Kenji wasn’t suspecting a thing. I guess that part was a little funny. Then Kenji goes all Shizuo from Durarara!! on their asses and that’s it.

And then after the credits we get a nice Dazai gag which I also thought was a little funny.

Come back next week for the final review, and then the overall review probably a few days later. Thanks for reading.

– ^The only nice thing I can say about this episode