Okay, I’m see my main issue with this arc now: it’s using the same character to illustrate a problem that’s already been solve once before. Kariu is being stubborn and taking her frustration out on others again. Her envy is fueled by the same self-loathing that any “hardworking dreamer” goes through when in the face of extreme talent. She did it with Chizuru, and now she’s going through it with Honoka, who is actually her friend at the time unlike in Chizuru’s case. You would think that Kariu would’ve learned from that experience, but apparently not because she’s still letting her emotions get the best of her.

This scenario is made different in a couple of ways, but I still have trouble with the fact that they’re retreading old ground, painting her out to be much more annoying and unintelligent than I think is necessary. It’s almost mean how dumb the show makes her look right now. Anyway, what differs from the first time she encountered these troubles really has nothing to do with her at all. The people around her have changed, and the point of view in this arc is more rested on Honoka than anybody else. This gives us more of a look at what it’s like to be on the receiving end, but ultimately it’s nothing fresh or unexpected.

Honoka talks about how she was always resented because of how she is just naturally better than everyone else, but we already knew that from previous episodes. Then she talks about how Kariu was the only one who accepted her for who she is, which we also already new from earlier. This time however, Kariu’s outside the door and listening in on the conversation. Chizuru shares some wise and compelling words that seem to have come from her experiences with Kaizaki. Kaizaki doesn’t say anything, instead he pats Chizuru on the back, giving her the strength to speak out. There’s no real insightful thoughts or words from him, he’s just there for emotional support. Chizuru even comments later that she was only able to help because he was there.

While that’s very sweet and all, I feel the lack of any sort of intellectualism really kept me from truly caring about anything to do with this conflict. It was a bit stupid, and not the good kind of stupid. You know, that beautiful stupid moment that you know is stupid but can’t help bursting into tears anyway and blathering like an idiot because it was so eloquently executed and relatable/believable? I don’t know, maybe that’s just me. Back to the topic at hand, the only one really able to take a good look at herself and try to obtain a meaningful comprehension was Chizuru. She even understood what her place was in the situation and that what she wanted was with good intentions, yet also selfish at the same time.

Even later when Chizuru has to confront Kariu, she explains that she’s not there to patronize her. Her selfish desire to have friends and sit at lunch together again were part of her driving force. And that’s okay, because it’s more real and honest than anything Kariu or any of the other characters have said or done so far. Kariu responds positively to it as well, and everything works out splendid as she comes to the volleyball match to play with Honoka after all.

Overall, I wasn’t too pleased with this episode. It was nice to see Chizuru have to step up for her friends, but the reason she needed to wasn’t quite as smart or interesting. It felt very melodramatic and while I was happy with the conclusion being that they’re all much closer friends now, the path leading us there was filled more with upsetting twists than interesting ones. Also, Kaizaki didn’t really have anything to do with this, other than being there for “emotional support” which to me just felt like a cop out. Sure, it’s comforting to have a friend by your side even if they don’t say anything, but it wasn’t necessary for this as I felt his emotional presence was far more important than his physical. He helped her, she knows that, and maybe just thinking of him helps get her through with what she needs to do next. 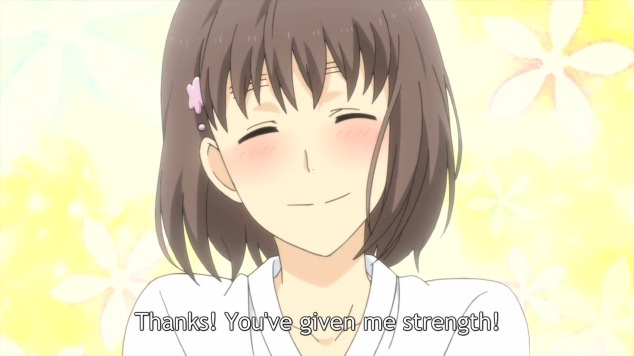 All I know is, this episode made me care a hell of a lot more about Chizuru…but also a lot less about Kaizaki and the others. Oh, and is An no longer pretending to be a classmate? If so, damnit, I really like her and Kaizaki’s rapport. Although with her out of the way, there doesn’t need to be a messy and unsatisfying romantic rivalling where one character will always end up the loser and it’ll be bittersweet and sad and- yeah, love triangles suck.