So I’m having mixed feeling about Sweetness & Lightning. On one hand, I totally understand the appeal of the show and also find Kouhei to be a total DILF. On the other hand, I really hate kids and find almost nothing cute or interesting about them. Another problem I have with the show is that I feel it’s just too pure and innocent. Now, I’m not saying Sweetness & Lightning needs a touch of sex, drugs, and violence to suit my fancy, but the way the characters have been acting so far has tasted a bit too sweet. I’m on episode 7 right now, and I have debating on whether or not I should drop this show since about episode 3. Still, I’m sticking with it, hoping that somewhere down the road this show has a pleasant surprise for me (although I’m almost certain now that there won’t be). And so, I thought I should write down the things I like and dislike about this show and share them. Enjoy.

The single-parenthood aspect of the show is appealing to me for a number of reasons. It’s interesting to see Kouhei struggle to raise a child on his own, to provide for the only family he has left and hopefully be enough for her as she grows to become her own person. His anxiety as a parent (and as an adult) only increases with the loss of his beloved, but he manages to keep his life together and hold a steady job as a teacher (I assume, as I haven’t seen the period of time directly after his wife died). It’s impressively real for a cooking show to have this kind of depth to a character. His reason for cooking isn’t to be the best chef there ever was, he just wants to provide great meals for his daughter. And it’s endearing to see his own joy that comes from pleasing Tsumugi with his cooking, happy with each reassurance that he’s enough for her. 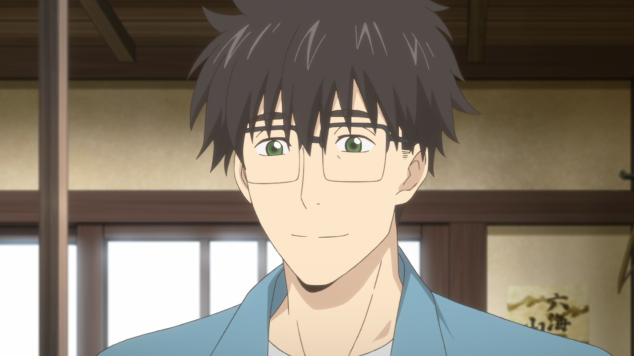 Another part of this show that I enjoy is Kotori and the restaurant. Not Kotori as a character, mind you, but the role she plays in the overall plot. She’s lonely because her parents are never around, and while they do own a cozy little restaurant, it’s rarely ever open. This allows for an interesting setting and a potential new family member for the Inuzuka’s. I meant like in a “your friends are your family” kind of way, but would also be open to Kouhei getting involved with a younger woman. Still, I would like the restaurant to serve more of a purpose than just being a place to cook, and with that I think it’s time to delve into the things I do not like in Sweetness & Lightning.

There’s no grand purpose for these characters, no end goal in sight. It’s like they’re only in it to enjoy their lives and cook delicious meals in their leisure, engaging in drama and hardships only when they arise and diffusing any difficult situation with a savory supper. Is the lesson to be learned here that food solves all your problems? I don’t have an issue with every episode ending with a preparing and enjoying a dish, but it’s not the dish that solves most of their troubles, and the show should be better at presenting that. It’s more the act of being and working together to create something that allows them to connect with each other and eventually open up.

But back to the part I said about having no purpose, these characters just make food for fun. That’s it. While that might be enough for some people, I want more compelling reasons in my narratives. The episodic goal is to create a certain dish, but what about the overarching objective? I would much rather have it be that Kotori was actually quite a decent chef that could teach Kouhei, and together they would run this old restaurant and bring it back to its former glory. I know Kouhei doesn’t need another purpose in life because Tsumugi already fills that role, but the aiming to make a successful restaurant would give the characters a target to shoot for. Raising a child is different from establishing a business, it’s essentially working at something vs. working towards something. A child doesn’t grow because you make it grow, it’ll just do that on its own (at least physically). While the end goal could be making a decent human being, it’s more of a matter of time than active progression. I just like to see that a story could go somewhere, and a child growing up is more of a foregone conclusion rather than something to strive for.

Now, I mentioned I hate kids earlier, so of course that’s going to be one of the things I dislike about this show. Children are dumb, and not in the good way that makes you laugh because of how dumb it is, or in a way that we call something dumb when we really mean absurd but are at a loss for words because of how dumb it is. No, children are just plain stupid and their problems are meaningless. I speak in a general sense which in a way might be seem problematic, but I don’t see a children’s rights movement going on anytime soon because they’re too busy eating their boogers and spending their parent’s money on in-app purchases when they frequently borrow their iPhones to play shitty, free-to-play mobile games. Where was I going with this? Oh yeah, let’s just say in a general sense that children suck, with maybe a few outliers here and there (I actually do like it when children are written with intelligence and are made much wittier and more mature than would normally be the expected). Childhood drama is the dumbest waste of time you could possibly subject me to. “He called me a thief even though I didn’t steal anything, yet I still cried about it” was an actual thing that happened in this show (I’m paraphrasing of course). The point is, children worry about the stupidest thing. I do like the parenthood aspect of the show, but I guess you can’t have that without a childhood parts as well.

Finally, my last gripe with this show (so far): Kotori is way too innocent. She’s in high school, hanging out with some handsome, distinguished, single, older man, and all she can think about is food? I call bullshit. Have a crush on the cute, nice assistant teacher. It’s the right thing to do. And even if you don’t, find something that makes you an individual. Sure, she likes cooking, but we don’t see her practicing her hobby except when she’s with the others. Her love of food is presented in a less than organic fashion when she comments on everything she eats; like the movie popcorn she ate during the intro to episode 5. If she’s thinking about food all the time then she might be obsessed, which would be fine if her thoughts matched her actions. She should be cooking whenever she can and be able to overcome her silly fear of kitchen knives. Instead, she’s lonely but not really as sad about it as she was from the first episode. Kotori has one friend, and she’s almost as dull. Look, just have an impure thought every once in a while. It won’t kill you.

I guess the cons kind of outweigh the pros, yet I’m still finding it hard to drop this show completely. At the very least, it gives me some nice recipe ideas. Well, what do you think about Sweetness & Lightning? Do you think I’m crazy for not loving it, or are you more or less in the same boat as I am? And most importantly, do you hate kids? Why or why not? Please leave your comments down below and thanks for reading.

3 thoughts on “A Mixed Bag – Thoughts On Sweetness & Lightning”