We’re finally getting an in depth look at the past of Kaizaki, and I must say I’m surprised, mainly because I was skeptical about his backstory being as dark as what was alluded to in previous episodes. Turns out crazy, traumatic shit happened to Kaizaki, and it affected him in a way that seemed to be appealing to the ReLIFE corporation. It broke Kaizaki as a person and left him completely inadequate for other hiring companies, leaving him to work a part-time job just to get by. At some point ReLIFE decided to swoop in and help him, both financially and as a form of unbeknownst rehabilitation.

While I was fine with the whole “let’s see what happens when you put a NEET back in high school” premise, this gives Kaizaki a reason for being a NEET in the first place. I don’t think the reason was necessarily needed, but it works out pretty well all the same. It also gives us a decent look at “black companies”, which are a real problem in Japan. I typically prefer problems that arise in a story to not be just some assholes being assholes however, and so this didn’t really satisfy me quite as much. We don’t learn anything about these harassers, other than they’re envy-filled scumbags. I like to like villains, at least on some level, and there is no level of which I could possibly like or relate to the soulless marionettes of this company. It’s a hollow dilemma that can be dealt with quite simply: With fire. Or, you know, just walk away like Kaizaki did, which in hindsight is probably the better solution. 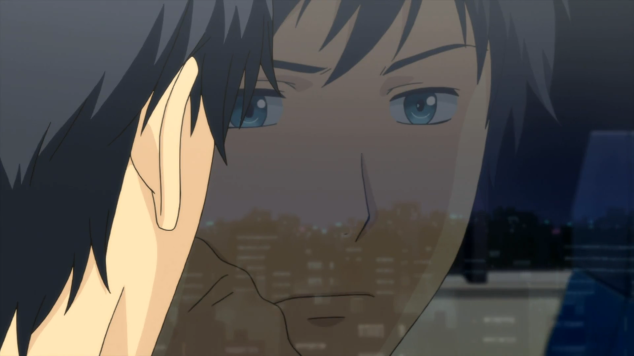 I felt this whole ordeal that Kaizaki had to go through was quite dark, and a bit off-tone from what this show really is: A rom-com. Was there really a need for us to know all this? It’s a nice story, but I don’t know if a background this tragic is necessary for Kaizaki to be who he is. Perhaps there’s still something missing about the ReLIFE program, maybe something pertaining to why Kaizaki was really chosen. I didn’t really need to think or know that Kaizaki was picked for a specific reason, I could easily accept that he was just a random NEET selected for a very special experiment. That being said, if this experience did in fact shape him a bit as a person, and his personality is important to the program because they’re not only studying the affects others have on him, but the effects he has on others, then I guess I could consider this an important plot point. Otherwise, it’s just sad.

Apologies for this post being so late, and kinda short compared to my usual writing. I’ll make sure to be quicker next week.

One thought on “ReLIFE, Episode 11”