Flip Flappers has been quite the “sleeper hit” for me personally this season. The only reason I even stumbled upon it was because it’s colorful promotional art caught my eye when I was browsing fall simulcasts. Thank goodness I did though, because the way it’s been shaping up so far has left me feeling that it could not only be my “Anime of the Year”, but also a lifelong favorite. Out of the many reasons as to why I feel this way, there is one that I believe stands above the rest: The absence of exposition.

Now, I will admit that my experience with the Action genre has been relatively short, but in that time I have come to notice a certain narrative structure that always tends to come off as lazy and a wee bit belittling. Generic action shows utilize a two-step sequence when it comes to basically all of its storytelling. Step 1: Set up the fight. Step 2: Show the fight. While there’s nothing inherently wrong a simple plot structure, the problem that tends to stem from this one, in this specific genre, is that there always seems be a heavy focus on the fight, leaving the set up neglected and generally unentertaining/contrived. 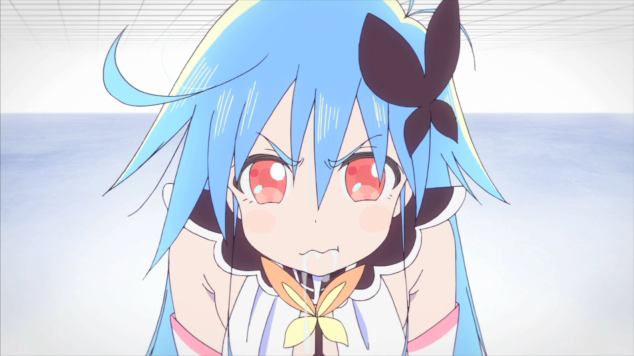 These action shows seem like they make a compromise in their own mind about how their stories will be consumed. Get through the boring first part and then you’ll receive a cool, fighting spectacle. Learn these characters, their motivations, and the stakes of the battle and you’ll be rewarded with a super-fantastic, action climax. We watch them build the bomb and light the fuse, then bask in the heat of the explosion. But is that really the only way we can enjoy a story?

One of the things I hate about a lot of shows that use this approach is that they never actually put the effort in to make the first half as entertaining as the second. The worst thing that can happen in these scenarios is the setup being almost completely covered by exposition. Either by longwinded voiceovers or blatantly unrealistic dialogue, the idea is that the plot NEEDS to be explained to the audience in order for them to appreciate what happens next.

Flip Flappers says nuts to that and flips the genre’s standards right on its head. Not only will Flip Flappers not be giving you copious amounts of exposition, you’ll barely receive any setup whatsoever. Instead, the show relies on you as a viewer to already have an understanding of its genre and the tropes it entails. It believes in you to already know what a magical girl is, why they transform and how their power is always somewhat tied to their emotional state. The show trusts you understand the accumulation structure, where characters both good and evil go around collecting things (gems for instance), and once they have enough something is bound to happen. And so on.

You have to know a few things in order to grasp what’s going on here, but even then the most genre savvy viewers would not be able to paint a clear and concise picture based on what has been shown so far. Flip Flappers is really, really vague, and to me that’s part of its charm. Taking the villainous cult in the show for example, we never actually learn what the name of their organization is or even get an idea of what their plans are. All we know is that they kinda look like the KKK and are ominous as fuck. The organization for the good guys is equally as un-descript, and all we know about them is that they have a scientist, some lady, a pervy robot, and the girls. The worlds of pure illusion are what they are, and aren’t explained any further than that. We know very little about Cocona and Papika other than their personalities of being “nervous and uptight” and “carefree and autistic”.

All we get are vague senses of the world, the characters, and the motivations, yet somehow it manages to keep me enthralled week after week. The show manages to carry itself with delicious action sequences, a heavy reliance on raw emotion, and a superb direction of avant garde mise en scene. That being said, I don’t think Flip Flappers is great because it succeeds so much in some areas that it makes up for failures in others. No, what I really believe is that the show knew the combination of these aspects would fit together perfectly.

It’s truly remarkable how attached I am to these characters despite how little details have been outright presented to me. I care for Cocona and Papika, and even Yayaka now because I’ve watched them, through observing them I’ve managed to connect with them on such a greater level than if I were just told their flaws, insecurities, mindsets, and etcetera.

Let’s use the latest episode as an example (episode 9). In it, we see a flashback of Yayaka and Cocona together as children in a hospital. This was the first time there’s ever been a real flashback in the series, and it manages to tell a lot without explaining anything overtly. It’s not explained as to why they’re in a hospital, except for a hint that Cocona has had some sort of testing done to her when speaks briefly about how “sticking those weird tubes” in her is a pain. After becoming friends through just playing around, Yayaka has a conversation with silhouetted men about how Yayaka needs to now stay close to her. From this we learn the ominous people were with Yayaka from the start and her relationship with Cocona was built on deception, but there may be a hint of something real in there. Using this we’re able to piece together the emotions behind her actions. What we still don’t know is why Yayaka was forced to do this or why Cocona’s important to that evil group. But that doesn’t matter in the end because all we need to know is that a motivation exists. What’s significant is the raw emotional impact being created, not through story structure but through direction and characters.

And there’s plenty more examples where that came from. But for now, I think it’s time to wrap up and save the rest of my thoughts for the final review. I love that there’s still plenty to piece together in this joyous and immensely creative show, and I’m glad it dodges genre conventions with such breathtaking elegance. As someone who has always found the “show not tell” approach to be vastly more appealing, this show is quite the treat. But I wonder if that certain approach isn’t as equally beloved by others. So that’s what I’d like to know from you. Do you prefer to be shown and not told? Please leave your comments below as well as any other thoughts on Flip Flappers, I’d love to hear what you think. Thanks for reading.

7 thoughts on “Show, Don’t Tell – Why Flip Flappers Is So Damn Good”