I thought I had already said all that I needed to say about this show, and yet here we are. Its flaws have been pointed out and my ideas for fixing said flaws are open for all to read in my latest “From Bad Anime…” post. Even so, as I watched the final episode of the lackluster series, I couldn’t help but feel there was something still left to say about it. Something important to take away from this experience. And while a lot of it is basically elaborating on my previous statements, I believe there is still enough left to justify me writing about Magical Girl Raising Project one more time.

Mahoiku started off started off strong, with an interesting premise and enough subtle twists to the death game formula that I thought it had the potential to be something truly unique. The way the first two deaths in the game were handle made me believe the show wasn’t going to be about physical fighting and gory murder at all. It seemed to shake down more like a psychological game, one where a player’s downfall would not come from another magical girl, but from the flaws in their own character. Nemurin (the dream girl) was the first to go, and the cause of her demise was her apathy and all around laziness. After that came Ruler’s death, brought down by her own hubris and failure to doubt her control over her subjects. These deaths were compelling to witness, and caused me to believe that this show was going to be about more than just arbitrary death and despair. 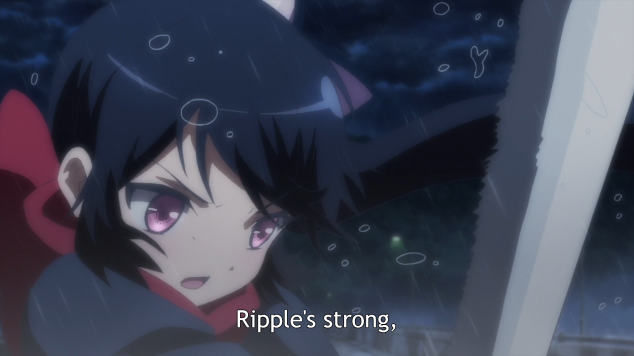 With a little insight and build up, watching Nemu and Ruler fall was emotionally striking and thought provoking. Death from mistakes hold far more meaning than just deaths for the sake of…well, for the sake of nothing really. For the most part, the characters that die end up not mattering at all. Other than Ripple needing a reason to take revenge, the cease of existence for any character has little to no effect on the plot or the other characters. Snow White becomes sad, and it doesn’t change a damn thing. Sister Nana hangs herself after the death of her lover and nobody really cares. It all comes to the same conclusion eventually, and while it might be preferred for every death to pose some sort of significance in the story, at the very least it would be nice to have them be of any worth to the viewer at all.

The death game’s convoluted rules served no purpose other than to get us to the last person standing, giving absolutely no reason as to why the show pretended to be anything else in the first place. And that’s really what bums me out the most, because if that’s what the show was going for, why didn’t it just say so? I’d be fine with it so long as the show was being intellectually honest with itself and its audience from the start, knowing that what it wanted to be all along was just a simple magical girl death game. Instead these arbitrary rules that can only be assumed to have some sort of greater consequences later on turn out to have almost no ramifications whatsoever, so it begs to question why the series was even introduced like this in the first place.

In the end, I just wanted something more thoughtful (in terms of underlying themes and motivations). They could’ve shown the weakness of human nature through the failures of these characters and had the victor be the truest of magical girls, defining a magical girl as a being who cannot and will not succumb to the flaws of humanity, such is a perfect entity. And then that would bring up the dilemma of living off the sacrifices of others, as how could a magical girl be considered pure when she stepped on the lives of others to get there?

But back to just the simple portrayals of destructive human behavior. Each character could’ve had a major theme behind their own undoing, all related to the flaws of humanity. I already see a few left fairly untapped in the show, such as Sister Nana’s blind optimism/idealism, Calamity Mary’s relentless pessimism, or Magacaloid’s good old fashion greed. I guess I’m just caught up in my own idea of Magical Girl Raising Project being better off when it was being true to what I mistook the original vision to be. For what it’s worth, I think the show had pretty creative plotting when it came to killing some of the characters (like what Tama did in episode 11, hope that isn’t too much of a spoiler). While I didn’t hate my time spent with this show, I’ll probably always have this feeling of what could’ve been weighing me down whenever I think about it.

I wish I could’ve liked it more, but it’s just not what I thought/wanted it to be. And even after that, I couldn’t find much to appreciate about what it turned out to be despite any idea of what should’ve been, as it offered barely a lesson to be learned nor anything fairly inventive in any aspects aside from its narrative. Oh well.