Oof, what an adorable robot. Like, before I delve into the story and themes and what not, I need to point out just how genuinely loveable this character is. Yumemi, the robot feature in all of the game’s promotional material and the only character model in the entire visual novel, is an amazing blend objective thinking, raw servant-kindness, and child-like innocence. Her astuteness and endearing productiveness know absolutely no bounds, and her rich dialogue/performance make her a character that I legitimately want to have a conversation with. She’s programmed to do her job as a gracious host of the planetarium, always admirably committed to her guests through the rain, shine, or apocalypse.

Sadly, Yumemi does receive that chance to prove her utmost dedication. The world as we know it has ended. A war birthed from all the issues of humanity (overpopulation, depletion of natural resources, etc.) has ravaged the planet and left very few inhabitants, people whose very last item on a list of necessities is “star gazing”. Chemical bombs devastated the land and caused many evacuations of once bustling cities. Certain sides of the war then decided to occupy what remained of these cities with giant, killer mechas. Long after those sides disappeared, their machines still remained. Still programmed with their same murderous directive, they continued to make the cities uninhabitable, and now only the craziest, most desperate people would enter these zones to scavenge for valuables of a lost era.

(Oh, it’s also important to note that the war originally broke out right after a failed attempt at space colonization. I’ll explain later. ) 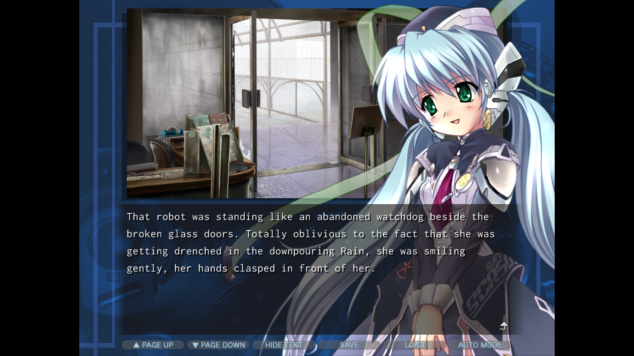 Our main character (you) is one of these crazy, desperate people, and this story starts with him stumbling upon this planetarium in the midst of searching for liquor and cigarettes. He is met by the cute, robot girl who has been anxiously awaiting the arrival of any customer for the last 29 years and 81 days. She continues to work there under the impression that at any point someone could come, justifying her need to constantly prepare herself. It seems to be a pitiful yet also admirable existence, clinging on to a hope that would’ve been long lost by even the most tenacious human dreamers. The man eventually takes interest in this robot, and due to a number of other circumstances as well, finds himself staying there longer than intended.

Yumemi is a robot that only has the mindset for working, prying, and serving humanity at all costs. Together, Yumemi and the man have some interesting and charming conversations, mainly where the guy constantly pushes her away and she just can’t help herself so he eventually gives up. What Yumemi wants more than anything however, is to give him a special commemorative presentation that was planned for the 2,500,000th customer, a mile stone that the planetarium had just about reached before the world changed. Sadly, the projector is out of order, but this man just might be able to fix it.

Through a handful of conversations, contemplations, and complications, the story folds out to be about an antiquated, untouched sense of hope existing a world that’s otherwise devoid of it. “Reaching for the stars” has always been a metaphor for ambition, for following one’s dreams, so it seems like quite the odd coincidence that the failure of colonizing space was pointed out as one of the starting points for the downfall of mankind. It’s hard to determine whether this game is trying to send a message of the importance of hope or giving a stark reminder that there is no use in being persuaded by these blind ideals. I’m not going to spoil the ending, but it does seem like the theme here is meant to be left up to interpretation.

I admire the clear effort put into Yumemi’s art, she’s a very beautiful and humble character. It’s a shame the rest of the game’s art couldn’t have been as appealing, as the background art is pretty sparse and unmemorable, not to mention cropped in a really odd way (as you can see from my screenshots). The soundtrack is mostly soft and soulful, with the exception of one song that’s so annoying and repetitive I had to turn my music volume down just to get through the scene. One last random thing I’d like to point out about the game’s specifications, I think it’s really cool that the game allows you to choose your font. I chose Grisaia Custom SP as it is my favorite, just in case you’re a font nerd like I am.

Planetarian ~The Reverie of a Little Planet~ is short, somber, and sweet. It was certainly much more of a moving experience than I had expected it to be, and I’m glad it turned out to be thought-provoking as well as sorrowful. I don’t care for story’s that are just sad for the sake of being sad (*cough* Plastic Memories *cough*). While it doesn’t have the best background visuals, its one extremely loveable character really makes up for it, and most of the music manages to set the tone where visual settings couldn’t. Most importantly, I was able to walk away with some promising ideas, non-ambivalent or negative feelings towards it, strong emotional resonance, and perhaps even a little bit of hope. And to me, the makes it an experience worth having.