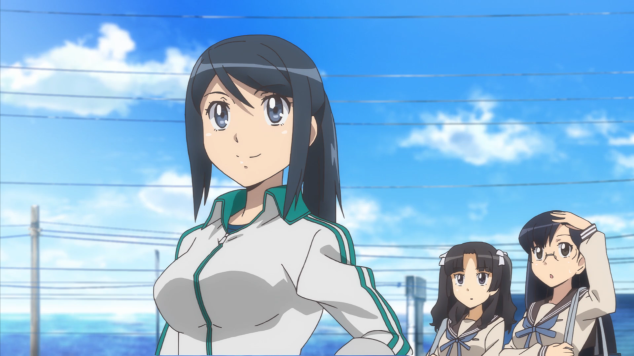 Last week I wrote about parts of episode 3 that were, in retrospect, a complete waste of time. The amount of frivolous set up leading the four girls to the point where they decide to make a club was…mildly disappointing. Still, I found there were some interesting takeaways to be had and some important themes being touched upon that made the episode—at least in some respect—worthwhile.  I cannot say the same for this week’s episode however, as the show seems to be regressing further from what originally made Girls Gone Bike stand out.

Starting with just recalling the very few, barely significant tidbits of information and developments in the episode: Shiki-sensei will be the Cycling Club’s official advisor and Natsumi is apparently a good cook. And that’s it. The Shiki-sensei thing was obviously going to happen and Natsumi being skilled at cooking is just me stretching the definition of “significant” to the point where the word might as well not mean anything at all.

Something important (and also completely predictable) also occurs at the end of the episode, but I’ll get to that later. Right now, let’s talk about the bulk of this truly worthless misadventure. The basic summary for what happened is: The leader of the swim team wants to recruit Natsumi, and even though she has absolutely no power over her, the swim leader challenges the Cycling Club to a bike race that’ll decide what club Natsumi will have to join. These pathetic excuses for “stakes” seem to be meant as a hackneyed attempt at introducing some sort of drama. Though through using the most elementary logic, any simpleton can deduce that this swim leader has no leverage on Natsumi or the situation whatsoever, and the whole race could be shut down by a simple “no”.

That being said, they go through with the race anyway, and Shiki-sensei oh-so-conveniently takes the opportunity to teach the girls (and the audience) the importance of adjusting the height of a bicycle seat. Hiromi and the swim leader girl agree to race up a hill. Hiromi’s given a tremendous handicap, but still manages to lose. Natsumi doesn’t leave the Cycling Club for the swim team however, because they all knew from the beginning that there was nothing they actually could have done to make her quit. Basically, they knew the stakes were meaningless, yet decided to go ahead and waste everyone’s time anyway.

After all that’s done, the four girls head to that bike café where Tomoe’s little sister unveils the uniforms that she designed for their club. I guess that could be considered another “barely significant tidbit of information”…oh well. The episode ends and then there’s an after credits scene where the principal denies the girls’ club request form. The girls are like “ahhhwhaaaaa?!!”, but it’s pretty easy to determine that the reason they were turned downed is that school clubs’ require at least 5 members. They don’t actually say that, nor do they imply it, as it’s presented more like the show’s trying to get its audience to question what happens next. Except I already know what happens next, because we still haven’t met that blonde girl from the OP.

Before I end this post, I wanted to state what my biggest issue with this underwhelming narrative is: The narrative of this show affects what we get to see. This is a very obvious statement, but one that needs to be made in order to get to my point. The current narrative of the last couple episodes took us (the audience) virtually nowhere. In this latest episode, the only decent scenery we’re allowed to witness is during the hill race. Episode 3 was very similar in this respect, as it also took place in mostly indoors. This disheartens me, because up until then I was quite impressed by the quality and abundance of gracefully painted scenery. Hopefully this show gets back on track soon, otherwise I might have to drop it.