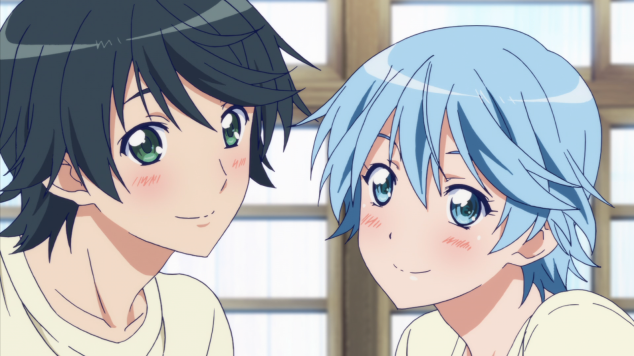 If you read my last weekend feature about Fuuka and clichés, then you probably know why I’m dropping this show. That being said, I’m going to quickly run through everything wrong with this anime right now, because I feel it necessary to understand what I like and dislike, and it’s a good exercise to convey that to others. I could just drop shows I find myself not enjoying and move on with my life, but instead I try to think hard about what it is that makes me feel the way I do. By doing this, I take what would have otherwise been just a waste of time and turn it into a learning experience. Also, I’m just reluctant to drop anything.

Fuuka is a show that seems to be unaware of many things. Generic formulas, overused tropes, what decent animation looks like, etc. It basically utilizes the most lackluster of clichés without even demonstrating that it knows it’s doing it. “Slip-to-nip” (I should trademark that) falling-boob-grabs, drowning then waking up to a girl performing mouth-to-mouth only to become flushed by the idea that you just had your first kiss (even though that totally doesn’t count), and really just blushing at every single thing anyone does; it’s all there. And it’s annoying because the show seems to want to take itself seriously. Clichés like these work if you’re clearly just indulging yourself, in things like a comedy that isn’t meant to be taken seriously. But this is a high school romance drama. While comedy certainly shouldn’t be excluded from the show, it also shouldn’t try with these half-assed attempts at hackneyed gags. The story and moment-to-moment of Fuuka is nothing to be impressed by either, as the plot of the love triangle already has a very clear outcome, and the way the characters get to that point will just be through a series of more coincidental and absurd plot devices. The main protagonist is clearly going to fall in love with the girl to whom the show is titled, which sucks because the idol and purple haired guitar player are far more enjoyable characters. Fuuka is just brash, stubborn, and likes music. There’s really not much to her character besides that. Oh, and the source of most of the show’s drama is just mundane miscommunications. Someone says or does something stupid, and someone misconstrues that. Then, rather than talking things out like rational human beings, they hold on to it until it all eventually blows up in their faces.

Here’s a show that I decided to jump back into for one episode after going on a multiple year hiatus. I started watching Aquarion Evol before I started blogging, back when my critiquing skills were pathetically underdeveloped. I can only shake my head in disappointment at my past self, being so naïve as to think that this anime was actually worth watching. All it took was one episode for me to realize just how much of a joke this show was. The plot is fantastical nonsense, the plot devices are even more absurd than Fuuka’s, and the dialogue is just plain stupid. Not even a good kind of stupid, like, so stupid that it’s gut-busting-ly hilarious. No, this dialogue is so bad that it makes you laugh only because it reminds of how dead inside you truly are.

But don’t just take my word for it. Here are some quotes I took from only one episode of Aquarion Evol:

“He reverses whatever you throw at him.”

“He reverses damage he takes too?!”

[And then when he succeeds in kidnapping her, her friends react…]

“I’m ashamed to say I was happy when I found out…If Mikono’s destiny is with him, that means you’re free to date around, y’know?”

[And the when the abductor and abductee have a conversation…]

Also, it’s a CG mech show with fight scenes that are positively mundane.

And that’s why I’m dropped these shows.

One thought on “Why I Dropped Fuuka & Aquarion Evol”