This show was disappointing, and that’s all that really needs to be said.

But for the hell of it, let’s take a look at exactly why Girls Gone Bike was such a disappointment top me. For starters, the characters are inconceivably bland. Most of them are just rudimentary copies of incredibly tired archetypes. Hiromi, for example, is Honoka from Love Live!, yet somehow worse. Most of the show’s pathetic attempts at comedy derive from her simplemindedness, whether it be plain slapstick or the good old “becoming astounded by uncomplicated and/or pointlessly misconstrued things” routine. When I first started the show I’ll admit she had maybe a little bit of charm, but her shtick grows old faster than I can down two 7-and-a-half-inch cheese steaks, and trust me, that’s fast. Not that I’m bragging or anything. It just is what it is.

As for the other characters, the only one I can find even remotely liking is Kamikura, who fills the classic “rich girl” role. While there’s nothing even remotely extraordinary about her personality, I do like that she doesn’t exactly fit into her archetype so snuggly like the others. Rich girls are typically the type to be insufferable bitches with superiority complexes that ultimately result in them having no friends. That is, until they finally meet someone who accepts who they are and doesn’t back off after the initial wave of hostility that they’re sure to be met with, when dealing with this class of “tsundere”. Kamikura is not that, she’s actually pretty nice and doesn’t seem to think too highly of herself, so in that respect she seems mildly refreshing. Although to be honest, I usually do find myself liking these kind of rich girl types, no matter how generic they may be. I also hate tsunderes that aren’t rich, because if you’re not loaded then what’s the point?

Anyway, aside from the characters, one of the only draws this show really had from the beginning was its setting and scenery art. There were plenty of picturesque background paintings in the first couple episodes, but after that the show seemed to have burned out. A majority of the season so far was spent in bland interior settings, with barely any biking or sightseeing to be had. Now, it’s not like this show explicitly promised it was going to be about biking and exploring the world. That being said, what the hell is it then? What the hell is this show supposed to be about if not the joys of biking and expanding your reach of the world?  Is it supposed to be a comedy? Because I haven’t genuinely laughed once.

How about a sports anime? Well, it took half a season to get to the first tournament, of which there was absolutely no training for, with stakes that are about as plausible as a three-dollar bill, and a teammate that fails to get past the starting line because of a random bike malfunction? Oh, and then she gets knocked over, so the entire team decides to give up their lead to help pick her back up, as if this it was supposed to be a profound sign of how far they’ve come as a team and as friends—except that camaraderie doesn’t exist. Because they haven’t earned it. Because how could they? It’s their first fucking race! 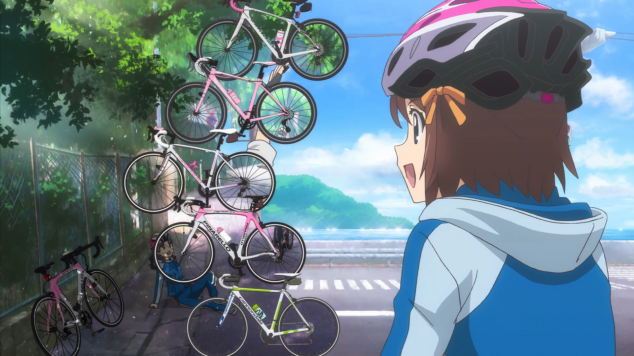 Basically, barely anything happens in this show, but when it does it’s completely unearned. There is a montage in this latest episode with still images of the girls riding around, perhaps that was meant to insinuate that these girls have trained in some way, shape, or form. Which reminds me, even the montages get progressively worse in this show. The first couple episode montages had gorgeous scenery and even some actual character animations in them. Fast forward to where we are now and we get weird bicycle slide transitions connecting still images, like some sort of shitty slideshow that your senile uncle Freddy made for your cousin’s wedding.

And that’s not the only thing that has gotten worse over time. The show gets worse at hiding its CG, its narrative loses even more purpose, character development becomes practically nonexistent after they’re initial introduction, and the new characters that are added later on are even more hollow. To put it quite frankly, Minami Kamakura High School Girls Cycling Club wastes too much time within the first half of its season that I can’t even be bothered to see where it goes from here. They haven’t even introduced the fifth member of the group, and it’s been 6 episodes. And that’s why I dropped it.

Now, with that done, I’m going to have to find something new to write about during my midweek this anime season. I have no plans solid plans yet, but you’ll probably see something here next week at around the same time.