So I decided to start watching that maid dragon show that everyone was talking about and sharing visually stunning GIFs of. Boy was that a good call, because Miss Kobayashi’s Dragon Maid quickly skyrocketed to the top of my “Favorite Anime This Season” list (which is currently a three-way tie with Konosuba and March Comes in Like a Lion). There are many things about this show that I believe are worthy of praise, but before I get to any of that, there was a certain connection I caught between this fantastic work and another recent anime that I found to be less than appealing, and I think there’s an interesting comparison to be had between the two.

NEW GAME! is an anime that I dropped after (count ‘em) 2 measly episodes last summer. The incredibly dumbed down version of why I dropped it would simply be this: It was moe, and nothing else.

But what is “moe”? Surely you have an idea of what “moe” is, so long as you’ve followed the industry in even the most casual way possible. Your definition of “moe” however, is most likely different from anyone else reading this blog post. That is because moe, as a term, is inconceivably broad. It originated as a mere Japanese slang term for feelings of deep affection for anime, manga, and video game characters. Fast-forward to where we are now and you might just think moe could be its own sub-genre. I for one can see both sides of an argument for whether or not moe should be considered a genre, but alas, that’s not what this post is about, so I guess I’ll save that topic for another time. 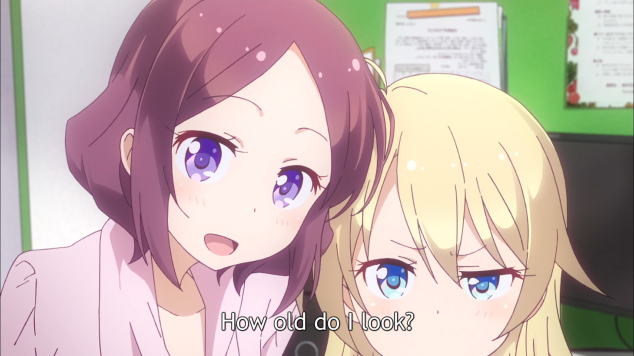 The Editor-In-Chief of Japanator, Brad Rice, once said that moe “revolve[s] around adorable, whimsical, clumsy, early-adolescent girl characters in order to evoke, enflame, and manipulate the interests and affections of the viewers”. He also went on to state that moe characters are “adorably cute, just a bit sexually appealing, and self-conscious but not yet cynical”. Using this fine definition, it’s very clear that NEW GAME! and Miss Kobayashi’s Dragon Maid should be considered moe anime.

With that in mind, I believe there are some pretty distinct differences that separate these two anime in the groups of: “Things that are so enjoyable it manages to relieve me of the soul flattening pressure that strains my back every waking moment of my life for a half-hour block” and “Things that have earned my mild disdain because of how utterly apathetic it made me feel”. Now, this isn’t going to be me singing praise of Miss Kobayashi’s Dragon Maid while simultaneously shitting on NEW GAME!, everyone that worked on it, their families, and the entirety of its fanbase. I merely feel indifferent towards the show, and I am going to express why that is…though, some might say indifference is worse than hatred. Because at least haters pay attention.

Starting with the only thing that makes NEW GAME! somewhat unique, let’s first look at the setting. NEW GAME! takes place in a game design studio that consists of nothing but insanely young looking women. This premise alone makes the anime look incredibly unrealistic, and although that’s not necessarily a bad thing, the show seems to be grounded in almost every other aspect aside from this casting choice. I mean, it’s the video game industry—an industry that’s predominantly (and some might say disturbingly) male centric. The show doesn’t seem to be trying to say anything particularly meaningful about gender either, so what is the point even having an only female cast? I know some would go on the assumption that it’s just catering to an audience that likes adolescent looking women. But in the end, that’s just an assumption. As in, using process of elimination on an endless list of possibilities and somehow finding an answer. All that can really be said is that there doesn’t seem to be a good reason for why NEW GAME! is like this. Not only that, it breaks my suspension of disbelief with relative ease because the anime seems to otherwise be grounded in reality. Honestly, Miss Kobayashi’s Dragon Maid feels more down-to-earth than this show, and it’s literally about having a dragon for a maid.

Aside from being unrealistic, NEW GAME! basically squanders its unique setting altogether by having very little insights to be shared about game development whatsoever. NEW GAME! is a comedy show first and foremost, and its comedy is derived from things that in no way are contingent on being in the games industry. Instead, the humor comes from hackneyed embarrassment and overreaction routines, emphasized by basic after effect animations like adding little popping bubbles over a character’s head to signify their anxiety and state of being overwhelmed, or swift lines coming from the frame inward to emphasize speed or loudness. Of course, even some of the best anime resort to these cheap maneuvers once in a while, but when a shows rely solely on these basic tricks and nothing else, jokes become tired very quickly. 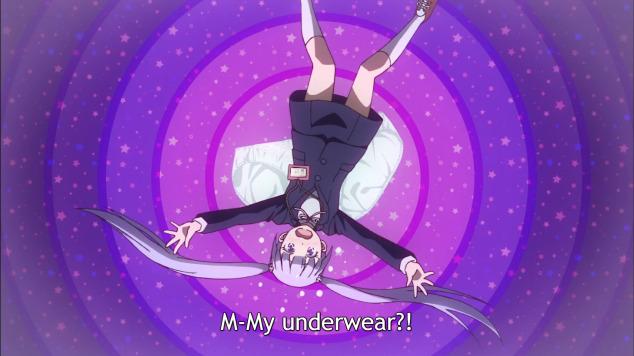 Not only does NEW GAME! rely far too heavily on simple gags, it usually pairs them with frivolous nonsense. Each time the main character is shocked over the fact that her boss isn’t wearing pants after the first encounter is one too many. How could you possibly be surprised by something you know is coming? She’s an established character with an established running gag, so get over it. Then there’s that time where Aoba and Yun were running to the office because they’re late and Aoba falls behind because she’s a weakling or something. Then she falls on her face. So I guess you can check “uninspired slapstick” off the list of cliché comedy bits NEW GAME! utilizes. There’s also that time Aoba went to a bar with her coworkers and didn’t drink anything, the time Hifumi’s earbuds unplugged which resulted in everyone hearing her loud pop music (which should’ve been death metal or ASMR, because then that would be actually funny), the time the panties lady berated Hifumi for writing emoticons in her excuse-for-being-late form, and so on. Alright, the emoticon thing was actually kind of cute, but the thing is, these things all have one disappointing thing in common.

They don’t have anything to do with video games. As if there’s absolutely no reason to be in this setting whatsoever, NEW GAME! ignores almost everything about the premise that it chose itself, and instead decides to find humor in mundane, hollow, everyday mishaps that could potential happen in almost all walks of human life. The themes and lessons to be learned from the show also have absolutely nothing to exclusively do with the games industry. Taking episode 3 as an example, Aoba has trouble designing her first character model and getting the approval of her boss. Every time she submits her updated model, it gets sent back, and eventually she learns that her boss was just trying to set higher expectations in her. Her original model was already acceptable, but panties lady was teaching her not to settle for “good enough”. It’s a nice lesson, but it’s also one that can be applied to literally any kind of labor.

That episode was merely about the trials of a workplace and the joy of knowing you did your absolute best. In between the actual moments of plot that worked to progress that theme, there were plenty of underwhelming jokes and kawaii, blushing, anxious facial reactions that served to be the mortar that holds this boring, useless stone wall. Or perhaps they are the bricks, as the plot seems to take up much less space, which would suggest the actual plot be more like the stuff in between. Whatever. My clumsy metaphor aside, NEW GAME! isn’t good moe simply because it’s only moe. Of course, this is completely personal preference, and I’m sure there are many people who will still like the show for exactly what I said it is. I just find embarrassment and overreaction humor in anime to be completely hackneyed at this point. But maybe that’s your thing, and that’s totally fine. It’s not like I could possibly take it away from you.

Anyway, be sure to come back next week as I finish this two part-er, and find out why Miss Kobayashi’s Dragon Maid is just plain better than NEW GAME!. Thanks for reading.