Sakura Quest was easily my most anticipated show of this spring season due to it being done by P.A. Works and looking like the wonderful amalgamation of Hanasaku Iroha and Shirobako, by seemingly taking the countryside, city-girl-out-of-her-element setting and premise and mixing it with an adult work life perspective. In essence, that’s exactly what it turned out to be, and for the most part I’m fine with that. I’m able to enjoy the show week after week for what it is, but I wonder if that’s only because I’m invested in the premise. Because I think I already have an idea for what Sakura Quest is going for, the obvious flaws don’t affect me as much. That isn’t to say I’m ignoring them though, as I wouldn’t be writing this post if that were the case.

Sakura Quest got off to a rough start. The transition between the main protagonist coming into contact and forming the main cast of which the show revolves around is about as smooth as sandpaper, and happens as rapidly as the quips in a NisiOisiN novel (which is very, very rapid). The five women that form the tourism strategy planning club thingy (do they have a name for themselves?) are immediately thrown together within the first two episodes, leaving little to no elaboration on what their motivations even are. So far these are characters that exist to service the plot, and it feels as if their reasons for doing anything don’t matter at all, so long as they’re doing what any given scenario asks of them. 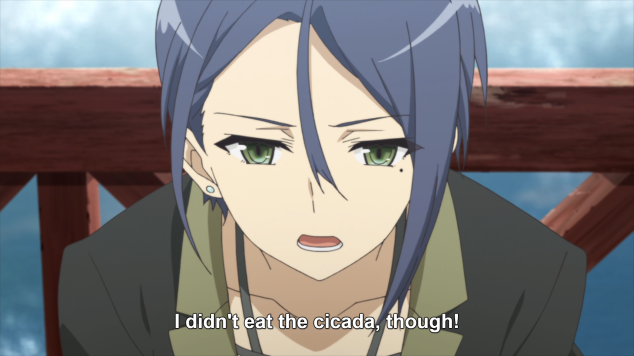 Besides Shiori, I couldn’t tell what motivation any of these characters have. Yoshino wanted to return to Tokyo after being mistakenly called out to the country for a job, but apparently feels the need to help reinvigorate the town instead—perhaps because Shiori was really nice. The blue-haired one sulks around for quite a bit about her acting career that never flourished. The brunette blogger is…well, a brunette and a travel blogger, and also might be into some wood carving guy. As for the long black-haired girl, I have no clue as to what she’s supposed to be besides the daughter of that one angry woman.

The fact that I, a person who is not great with names but not terrible either, had to resort to referring to a majority of this group by their hair color—after watching 8 episodes, mind you—is pretty telling as to how poorly established these characters are. A combination of not getting enough spotlight and not utilizing their time in that spotlight to bring out important, memorable bits of information are what’s probably to blame for this predicament. There’s a reason why a lot of shows first go through character arcs before anything else, and while sticking to a generic formula is by no means the only answer to creating well-defined characters that make sense within their given plot, Sakura Quest clearly hasn’t found a suitable answer, which is why it’s taking me so long to care about its characters—or even remember their names.

Right now, I’m just left to go with the flow and accept what comes next, pretending like these characters belong even though I was never given a reason to. While I’m intrigued in whether or not they’ll reach their goal (which is a similar feeling I had when watching Amagi Brilliant Park), I’m not truly invested in the characters themselves. Oh, and this isn’t to say that I think these characters are unmemorable, by the way. I think they’re character designs are quite memorable, and I find it a bit fascinating that they have so many costume changes. What they lack is establishment and the chance to let their personalities shine. I just hope by the end of it, they’ll get it.

3 thoughts on “A Rough Start to a Sakura Quest”