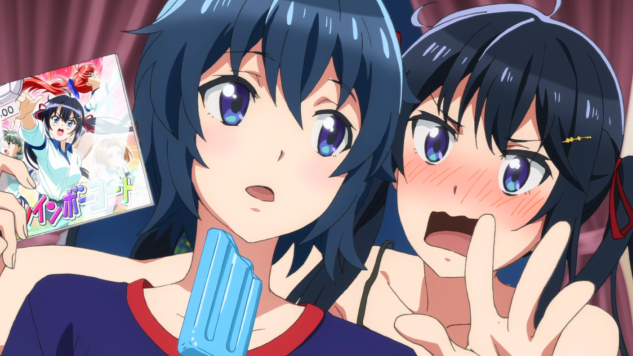 It’s been a while since I’ve done one of these, so allow me to give a quick refresher: I love otaku character’s in anime. Whether just for the sake of meta jokes, or deeper self/genre-referential commentary, I absolutely adore characters through which an author can show off their nerdy street-cred. These wonderful conduits for which to funnel greater contextual meaning always shoot to the top of my favorites list, but not for that reason alone. Put simply, I connect with them because they are like me, and when done really well, end up taking up quite a bit of my emotional real-estate. Like any other type of character, however, otakus can’t all be great. Some of them fucking suck. Some of them are just painful illustrations of the popular misconceptions of otaku culture, spouting Dragon Ball references in hopes that audiences might grow attached to this character because “they are like me”. Some otakus are Subaru from Re:Zero, and deserve nothing less than an endless loop of agonizing death. Anyway, I like thinking about otaku characters, and pointing out the one’s I love or hate. And today, I’ll be telling you all about an otaku I’ve come love way too much, from an anime that had no business being as fantastic as it was: Chiaki Hoshinomori from GAMERS!

First of all, GAMERS! is an utterly fantastic show that I feel an overwhelming urge to recommend, despite usually not wanting to recommend anything to anyone. The reason I want to recommend this show is because of how much it initially came off to me as a generic, club room anime. I mean, with just the name GAMERS! alone, I can understand why many could have come to the conclusion that this show is probably just a desperate grab at the gamer otaku demographic, a harem showcase of moe girl gamers dropped into a formulaic narrative where they all fall in love with the same angsty protagonist we’ve seen a thousand times over. After watching the entire season, however, I can assure you GAMERS! is anything but.

I’ll have to get into that another time, though, because right now I need to give my piece on why Chiaki is such an excellent otaku, and totally best girl. Hoshinomori starts out as the otaku we’ve all seen in real life—a loner, playing games by herself at school, with her only meaningful relationships existing online and not physically around her. She keeps to herself and pays no mind to her own appearance, as she has no desire to become someone that looks approachable. It’s only when our main protagonist reaches out to her does she finally transform into the cutest damn girl in the entire school. It’s not impress him, mind you. Amano is just the one that sets everything in motion. Watch the damn show.

Perfect short blue hair aside, what’s truly adorable about Chiaki is what’s inside. Her personality brims with otakuness, and you’ll feel that overwhelming of passion wash over you once the flood gates of her shyness and anxiety are broken through. She’s as big of an otaku for games as the main protagonist, without all the general shittiness that comes with being a rom-com protagonist. Not that Amano is a bad character, I actually like him quite a lot. Just not as much as Chiaki. The way Chiaki acts is so charming and silly, as a newcomer to the world of face to face interaction. She delivers some of the funniest lines I’ve ever heard with such quivering excitement, and has a catchphrase that’s so dumb, but I love soooooo much. Yes, yes. And as a side note, her voice acting, done by Manaka Iwami, was astonishing. This is probably her biggest role so far, which is admittedly not that big at all, and I hope she does well in her career because this performance was too good to be true.

So, she likes games a lot and is exceptionally cute, but what makes her a true-blue otaku deserving of such praise? The answer is: Petty squabbling. Yes, Shiaki gets into an all-too-relatable otaku argument with the show’s main protagonist, and the single, trivial disagreement ruins their otherwise pristine relationship. There could be no couple more perfect than these two knuckleheads, but their stupid opposing stances on moe in games render each other incompatible. Never mind that they agree on EVERYTHING else. Never mind that they love to play the same games, in the same ways, and gush about them with the same, immeasurable passion. These obsessive nerds won’t back down when it comes to their principles they hold regarding the thing they love, so much so that their friendship dies in the wake of an innocuous, but dissenting opinion. And there really isn’t anything more otaku than that. Thanks for reading.