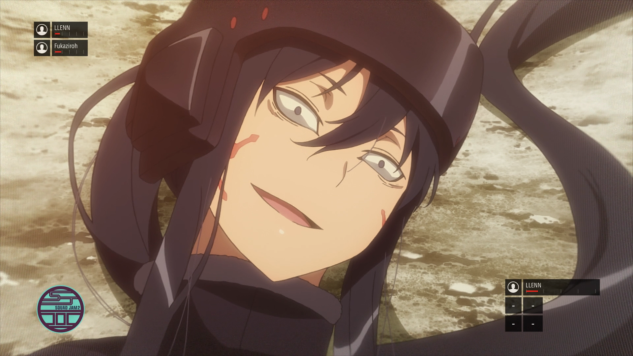 Sword Art Online gets a lot of hate, and I won’t argue against those that believe it’s well deserved. What I will argue against, however, is that its spin-off series is better due to being in the hands of a seemingly more capable writer. While I’m no fan of Reki Kawahara, I do believe his original work has something important that its spin-off series from Keiichi Sigsawa does not: A message. As enjoyable as Sword Art Online Alternative: Gun Gale Online was, it certainly lacked a coherent theme for which I could remember it by. A lesson to be learned, or even just a question intently posed at the audience to think about—anything worthwhile to be taken from it once the show was finished, aside from a really good time. As much as I like cool action for the sake of it, I wonder if there can ever be enough flashy explosions and impressive fight choreography to truly make up for a lack of meaning within a story. When looked at individually, I would say GGO does not manage to make up for that shortcoming.

Say what you want about Sword Art Online, but there’s one thing that you can’t deny: the story has a core theme. The experiences you have in the virtual world, as well as the relationships you create in it, can be just as genuine as in real life. We see this in every bond Kirito develops along his journey, and most notably in all his moments with Asuna. The foundation of their relationship is built off of Kirito teaching her to stop and enjoy the life they have, even while knowing that it isn’t the reality of which they came into being. From laying down in a meadow and basking in Aincrad’s optimal weather conditions to settling in a log cabin and raising a virtual daughter, the first arc of SAO was basically dedicated to showcasing how real these bonds can be—and how painful it is when they are torn apart. 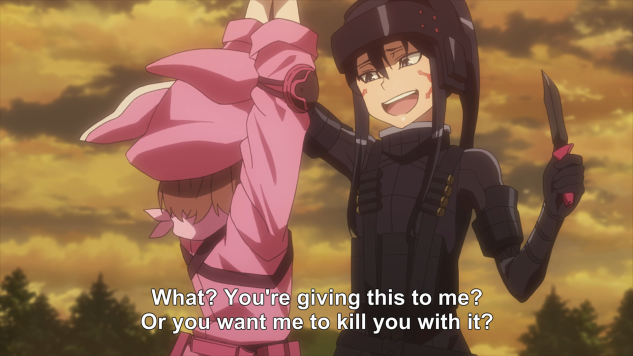 The “death in real life” gameplay mechanic of Sword Art Online is a little more than just an added stake. While the story’s use of death may often seem like nothing more than a hackneyed attempt to elicit emotional reaction, the cliché nevertheless emphasizes the devastation of loss—real loss, found in the confines of an unreal world. The same cannot be said for SAO Alternative, as its use of death is nothing but an additive, meaningless peril. Pito, the show’s main rival character, threatens to kill herself and her partner M if she loses to anyone but LLENN. This alone could’ve been the starting point for which to unravel themes about mental instability or dysfunctional relationships. Instead, the story ends with none of these issues being dealt with, or even thought about beyond one-dimension.

Everything just kind of resolves itself; Pito’s suicidal tendencies/claims are pretty much shoved to the side by a good ol’ lesbian kiss, her relationship with M doesn’t seem to go anywhere or mean anything, and no real problem is attempted to be solved, or even discussed. It’s not like this story needed to be about those two themes either. Other concepts to be explored could’ve been finding virtual outlets for destructive behavior, separating games from reality, or what I consider to be GGO’s biggest missed opportunity: what our online avatar’s say about ourselves. 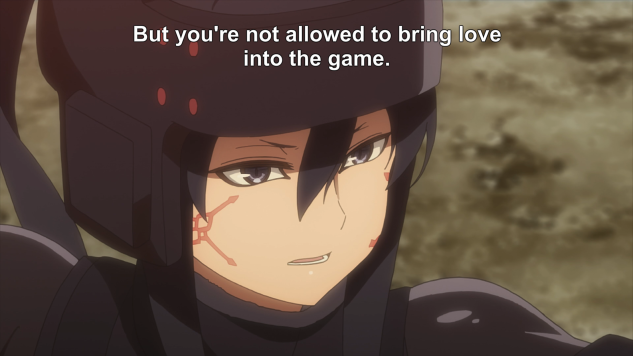 That particular theme, however, was obliterated by a piece of incredibly nonsensical writing. In video games, or more specifically MMORPGs, you can be whatever you want—that’s the typical allure of such games. Be it short and adorable, tall and ferocious, or simply strong and green, role-playing games are built to allow you to be your ideal self, and this is usually accomplished through your very first menu screen: Character Customization. That is not the case in the world of SAO though, as all virtual reality games within this fictional universe apparently don’t allow you to choose how you look. This is the narrative’s little explanation thrown in so that our main character, LLENN, finally stumbles upon Gun Gale Online after hours of searching for a game where her randomly created character turned out to be cute and tiny.

What this means is that LLENN only found what was closest to her ideal self—she didn’t choose it, and neither did any of the other characters in the series (for themselves). Their avatars mean almost nothing because they weren’t handcrafted. Everyone besides LLENN, who went through countless games to find the right look, were just given their roles, and so they decided to fit into them. While their commitment to roleplaying does perhaps say a little about them—be it the vicious Amazon girls or Pito’s blood-lusting persona—the way they look lacks significance, which is counterintuitive, because the whole reason our main character started playing VR in the first place WAS BECAUSE SHE WANTED TO CHANGE HER APPEARANCE! Never mind the fact that LLENN never shows what she thinks about how others perceive her, that doesn’t even matter because we’ve already been capped off at this miserable excuse for why she has to play GGO as opposed to any other video game. A simple “LLENN doesn’t like High Fantasy” would’ve sufficed, and wouldn’t have dug such a pointless hole for which all possible meaning that could’ve be derived from this story would be buried. 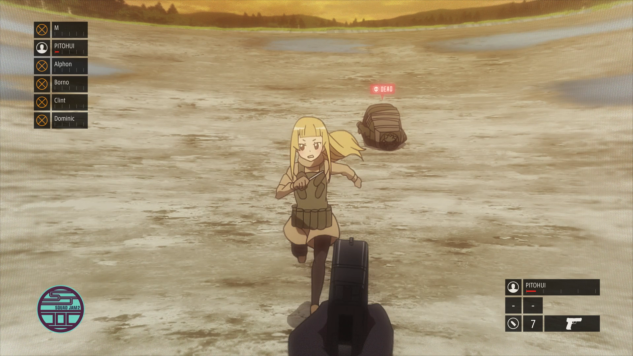 But you know what? We had fun, we had guns, and we had gay girls, and if that isn’t worth something, well…

Oh, and also, I’d like to add this reminder that I’m open to criticism and would love if you could share any examples proving me wrong. Show me there’s meaning in Gun Gale Online if you can. Until next time!